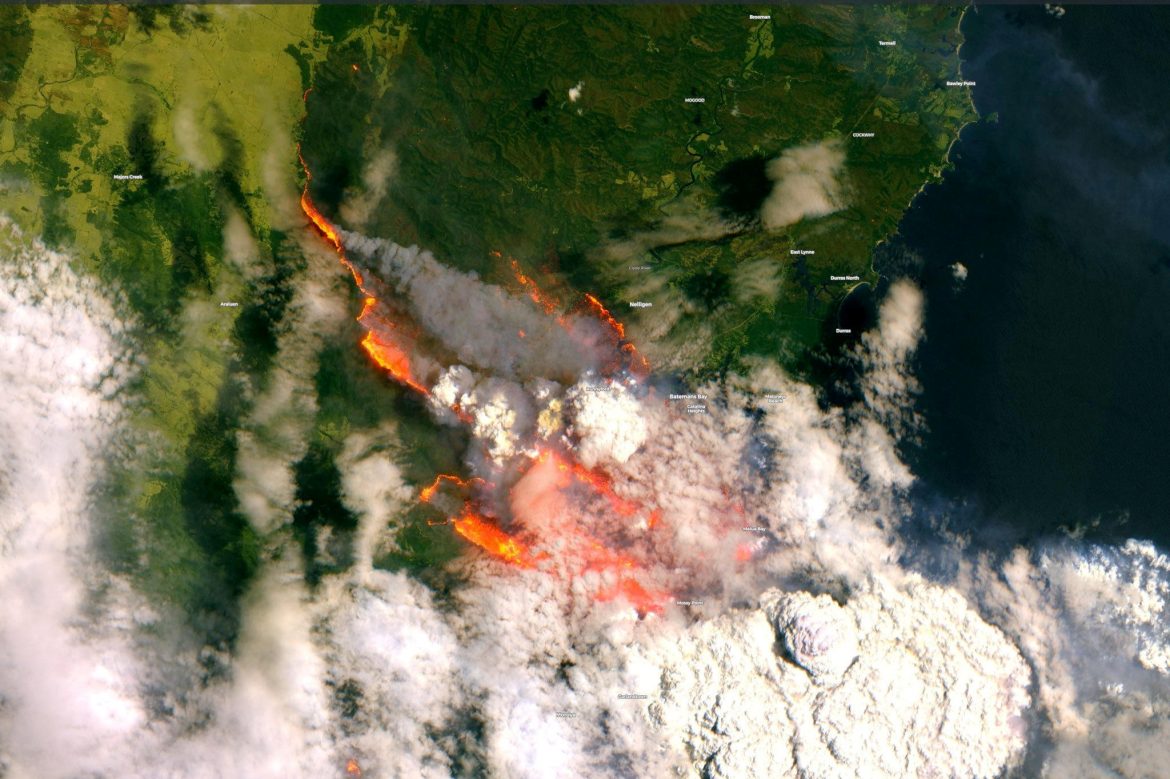 Why is Australia on Fire?

Possibly the second hottest year recorded in history after 2016, 2019 was also the end of the hottest decade (2010-2020) in history. July marked the summer of 2019 in the northern hemisphere as the hottest known month. In this period, the Amazon Forests struggled with thousands of wildfires far above the seasonal norms. While the northern hemisphere finally took a deep breath with the arrival of winter rains, seasonal fires in Australia progressed into an uncontrollable scale as the arid period began in the continent. And unfortunately, it doesn’t seem like the situation will improve anytime soon. According to the records so far, the wildfires displaced or killed more than 500 million animals, destroyed 7.3 million hectares of land, cost the lives of at least 28 people, and inflicted over 700 billion dollars of damage on a large number of settlements. Although rains provided temporary relief in some regions, even higher temperatures are estimated for the rest of the season.

For comparison of the burning regions, remember that Amazon wildfires of 2019 damaged 900,000 hectares in total. In the US state of California, again in 2019, a little over 100,000 hectares of land were damaged.

Wildfires that began across Australia in late July affected New South Wales (NSW) the most, which includes major cities like Sydney and Melbourne. While it is possible to contain some of the fires that start in smaller areas or neighbourhoods within a few days, huge areas that have been battling flames for months continue to cause enormous ecological and economic damage. Currently, in NSW alone, over a hundred independent fires still keep threatening flora and fauna.

The continent of Australia, where human-induced ecosystem deterioration is currently being experienced on the biggest scale and severity in world history, has a very sensitive ecological balance. The cultural wealth of the Australian Aborigines has been carrying out traditions and practices based on this balance for thousands of years. Seasonal fires, also known as bushfires, are in fact quite usual. In 2009, the Black Saturday fires were recorded as the worst fire disaster ever in Australian history, causing the death of 173 people. While the years 2017 and 2018 were also quite dry, current conditions are much more challenging as drought started earlier this year. Moreover, we are merely at the beginning of the dry season that is reported [by the authorities] to last for three months. December was already a record-breaker with the highest national average temperatures (41.9 ° C).

Australian bush fires, unlike the Amazon fires, often occur naturally (wildfires in the Amazon are usually man-made, with the purpose of creating land for agriculture and livestock breeding, or just to sell the trees). For example, lightning strikes in arid regions can spread very quickly in a very short time. Strong winds are not exactly helpful either. It is also known that Aboriginal traditions include practices of intentional and controlled fires in order to help pastures regenerate themselves and to attract herbivorous game animals to the region.

Nonetheless, around 200 people were detained for committing arson in Australia since November, and nearly 100 of them were arrested for deliberately starting bushfires.

Although these temporary fires occur seasonally every year, the majority of scientists believe that temperatures and drought above seasonal “normal” levels this year can be seen as a reflection of the global climate change. According to scientific data, Australia has been warming up over the past decade, like the rest of the world.

The effects of fires on wildlife are unfortunately, very sad. Although a solid assessment of the exact figures will only be possible after the flames are extinguished, researchers from the University of Sydney estimate that around 1 billion animals across the country were either killed or displaced by the blazes (500 million in NSW only). Authorities say that almost one third of the koalas in the NSW region died, and a third of their habitats were destroyed. Fortunately, koalas are widespread across the continent, and are not under threat of becoming extinct. But some species of frogs and birds living in narrower ecological niches, or have lower populations, may face the threat of extinction.

Experts also estimate that over 100 thousand livestock were killed by the flames, including goats, sheep, and cattle.

A number of countries sent specialist firefighters and equipment support to help the Australian government. In the face of such a large-scale disaster, volunteer firefighters make up the majority of those who fight flames.

As the dry season is just beginning in Australia, we wish everyone strength for the upcoming tough months, and therefore would like to remind once again that we should all think about our own consumption habits, carbon footprint, as well as our intentional or unintentional contribution to global warming. We need to remember that such disasters, predicted to intensify in the coming years, will not only affect the regions they occur but the entire planet and every creature living on it.

You can view the current status of fires in Australia on the map.