Lungs of the World on Fire

The summer of 2019, which is the hottest July in world history, bears both pleasing and sad news. We have tree planting records on the one hand, while we have dramatic forest fires on the other hand –both in Turkey and the world. The fires in Brazil’s rainforests are now even noticeable in NASA’s new satellite images.

According to Brazil’s National Institute for Space Research (INPE), the number of fires this year has already reached 73,000! Although fires in July and August, when temperatures are high and humidity is low, are generally considered normal to a certain extent, the figures for this year are almost record-breaking. INPE has been monitoring rainforests since 2013 and reports an 83% increase in the number of fires this year when compared to 2018.

The record temperatures of 2019, along with a prolonged dry period, are what causes fires to start and spread more easily. Brazil’s largest city, Sao Paulo, is currently buried in darkness under thousands of kilometres of smoke strips.

So, what causes these fires? 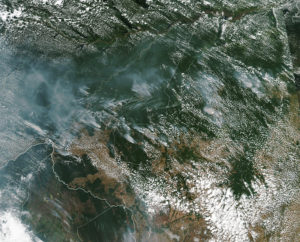 In dry and arid summer months, wildfires can occur spontaneously -even in the Amazon Forests. But humans are the main cause for these fires; whether intentionally or unintentionally. The main and the most important reason is deforestation for new agricultural land, livestock or other purposes. Such activities reach their peak in early September and finish around November. Then the cycle continues as the rains begin.

Brazil’s new Prime Minister Bolsonaro and his government, who recently took office, are being heavily criticized for loosening practices concerning environmental protection. Bolsonaro, who denies the data published by scientific institutions, even argues that NGOs may have started these fires just to criticize the government.

Amazon forests are considered the lungs of the world, producing 20% of atmospheric oxygen. In addition to slowing global warming, they are home to numerous plant and animal species. According to INPE, an area ​​the size of one and a half football field perishes in the Amazon rain forest.

European Union’s satellite program Copernicus offers a map application which enables you to follow the smoke reaching the shores of the Atlantic Ocean.