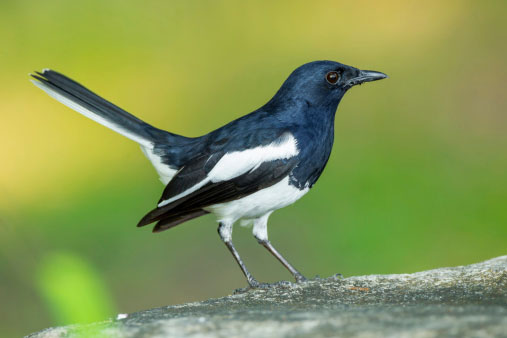 A member of the corvidae family – renowned for intelligence – the magpie (Pica pica) appears set for an image facelift after suffering under the enduring stigma of being a jewel thief.

A recent study by a team of psychologists credibly demonstrated that the  magpies, victims of the folklore which portrays them as pilferers with a taste for bright objects who carry dropped or unattended items of finery like rings or earrings to their nests, had no ambitions of getting rich.

Leave alone being attracted, these birds actually fear new, unfamiliar objects, say psychologists from the Exeter University’s Centre for Research in Animal Behaviour (CRAB). In the tests carried out at eight separate  locations in the campus with a group of birds coming from a rescue centre and another batch from the wild, all accustomed to the human activities, magpies were exposed to loose heaps of  nuts and those of shiny and non-shiny objects placed about a foot away. The items were shiny screws, little rings made of foil and small rectangular pieces of foil on one side, and same objects painted matt blue to mask their glitter on the other.

The results showed that the birds not only snubbed the shiny objects, but displayed a visible “neofobia” (fear of the new) against test items no matter they were shiny or not. In a total of 64 tests, magpies picked foil rings only on two occasions and immediately discarded them. They either ignored or gave a wide berth to shiny or matt objects and were timid to approach the food pile in their presence.

“We suggest that humans notice when magpies occasionally pick up shiny objects because they believe the birds find them attractive, while it goes unnoticed when magpies interact with less eye-catching items. It seems likely, therefore, that the folklore surrounding them is a result of cultural generalisation and anecdotes rather than evidence,” Dr Shephard concludes.