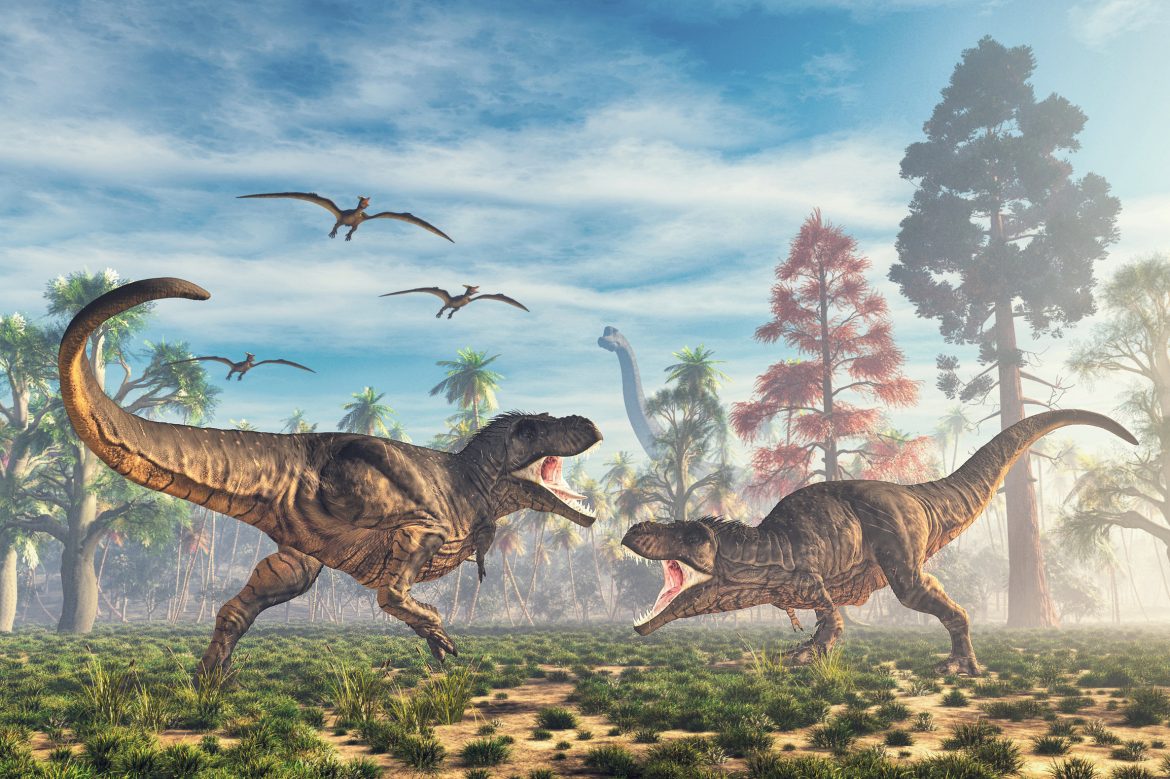 New Pages in the Story of Dinosaurs

Millions and millions of years ago, a large asteroid pierced through Earth’s atmosphere, and hit the ground at an amazing speed, carving a 200-kilometre-wide crater on the planet’s surface. The collision’s impact caused rocks and debris to vaporize, filling the atmosphere with dust clouds and blocking the sunlight, which caused the temperatures to drop by more than 25 degrees Celsius. The Earth, deprived of the Sun for months, experienced a great mass extinction caused by this collision, with 75 percent of all species at that time disappearing into history. All non-avian dinosaurs were among the species that went extinct. And thus, 66 million years ago, with this extinction, the Cretaceous ended.

So, what happened next? Next, the rise of mammals began. Species that became extinct, along with the dinosaurs, were replaced by new species. Eventually, humans joined them. However, humans were unaware of the existence of dinosaurs for a long time. In fact, when the English naturalist Robert Plot gifted the first known dinosaur bone drawing to history in 1676, he assumed the bone was of a giant human. As history progressed, more and more giant bones were discovered. Finally, in the early 1800s, English geologist and paleontologist William Buckland also came across these bones. He concluded that the bones belonged to an extinct, large, carnivorous lizard, and named this creature “Megalosaurus”. The name is still used today to describe a genus of dinosaurs, although Buckland, the first person to name a dinosaur, didn’t know it was a dinosaur either. The word was coined in 1842 by Sir Richard Owen.

By the time the calendars hit the 1980s, scientists uncovered traces of asteroid dust, scattered around the world in the same geological layer corresponding to the Cretaceous-Paleogene mass extinction (the layer in which dinosaurs fossils were found). Soon after, a crater of the same age as this layer was discovered in the Gulf of Mexico: The Chicxulub Crater. At that point in time, the story of dinosaurs came to life.

The upper boundary of this layer contained high levels of iridium, which is a rare element in the Earth’s crust, but common in some asteroid types. Scientists did find high concentrations of iridium in rock core samples taken from Chicxulub Crater in 2016. And the highest concentration was found in a sample taken from the crater’s peak ring, which also contained a mixture of ash and ocean sediment, as well as other elements associated with asteroids at elevated levels.

Studies on this geological layer continue until this day, and experts have recently been announcing exciting findings one after the other. In December last year, Florida Atlantic University researchers and an international team of scientists conclusively reported that the Chicxulub asteroid impact occurred in spring. The team studied fossil fish bones from Tanis, a well-known fossil site in the USA, which was previously dated from exactly the time of the Chicxulub impact. The growth lines in the studied bones revealed that all of the examined fish had died during the spring-summer growth phase. The research team also reported that the rapid depositing of sediment that preserved the only known impact-caused vertebrate mass-death clues was caused by a massive surge of water, triggered by the impact.

Later in December 2021, researchers from the California Academy of Sciences suggested that the Chicxulub asteroid impact possibly left Earth in darkness for two years. Right after the impact, clouds of pulverized rock and sulfuric acid blocked the Sun, darkening the skies and cooling temperatures, producing acid rain and giving rise to wildfires, which generated massive amounts of ash clouds and soot that spread in the upper atmosphere. The researchers claimed that these clouds possibly covered the skies for up to two years, leaving large parts of the planet in darkness.

Within the first weeks of wildfires, the concentration of fine soot in the atmosphere was so high that it reduced the amount of sunlight to a critical level, preventing plants from making photosynthesis. Although species close to the impact site died instantly, the damage was multiplied in months following the catastrophic event, as the plants’ inability to make photosynthesis is enough reason for an ecosystem to collapse.

Simulations created by the research team showed that the ecosystems were able to (mostly) recover after 150 days of darkness, but they reached a “critical tipping point” after 200 days of darkness. If darkness persisted for 700 days, however, the extinctions spiked dramatically and it required 40 years for conditions to rebound.

Scientists named 42 new dinosaur species in 2021 alone. Besides these new species, exciting findings were discovered from Alaska’s Prince Creek Formation. Paleontologists managed to identify bones of baby and young dinosaurs, belonging to seven species, indicating these species stayed in the Arctic Circle year-round to reproduce and raised their offspring there too.

We all know about the majestic and formidable T. rex. However, multiple studies published in 2020 and 2021 have revealed that large tyrannosaurs only turned into huge, relentless predators after a growth spurt in their teenage years. This way, they were able to fill multiple niches in the same habitat with their younger forms, taking up the roles that would be filled by other small carnivore species, and dominating the entire territory. This phenomenon only occurred in environments where larger carnivores were absent from competition. Yes, there were species larger than tyrannosaurs. One example is Ulughbegsaurus uzbekistanensis, a new dinosaur species described in 2021, from an upper jaw piece uncovered in the Kyzylkum Desert of Uzbekistan. The fossilized bones of a titanosaur, still being excavated in Argentina’s Neuquén Province indicate that the very specimen is even bigger, and may even be the largest animal ever to walk the Earth. We will see when the full results are published.

The almost complete armoured dinosaur (ankylosaurus) skeleton also found last year in the Patagonia region of Chile had a unique tail structure never seen before in any dinosaur. The species, given the name Stegouros elengassen, lived about 75-72 million years ago and had a fern-like tail that consisted of seven pairs of blade-like bone plates that were fused all together.

Another striking newly described dinosaur was Ubirajara jubatus, unearthed in south-eastern Brazil, and thought to have lived about 110 million years ago. Assumed to be a chicken-sized carnivore, the small dinosaur had long structures protruding from both shoulders. According to the researchers, the species also had colourful feathers down its neck and back, likely resembling modern peacocks and birds of paradise with both these “show-off” characteristics.

Then there is the discovery of a close-to-hatching oviraptorosaur embryo in southern China, which was given the name “Baby Yingliang”. This amazingly well-preserved dinosaur embryo from at least 66 million years ago was preparing to hatch from its egg just like a chicken.

Moving on to 2022, scientists announced a new dinosaur identified in Alberta, Canada in February. The species, now known as Thanatotheristes degrootorum, lived around 79.5 million years ago and was approximately 8 m long, likely a predator of large plant-eating dinosaurs. Another discovery in February came from northern Argentina’s Salta province. Thought to have lived approximately 70 million years ago, the species was called Guemesia ochoai.

Then, in March, a new dinosaur species was discovered in southwestern China. Given the name Yuxisaurus kopchicki, this specimen became the first early armoured dinosaur to be named from the Asian continent. The creature likely lived 192 million to 174 million years ago, was 2-3 metres long, and ate low-growing plants like ferns. The animal had a series of bone plates covering its neck, back, and limbs; and also had large spikes on its armour.

Finally, in early April, scientists discovered a perfectly preserved leg fossil, with remnants of the animal’s skin. The fossil was found at the famous Tanis excavation site in North Dakota, and researchers were able to date it -with absolute accuracy- to the time of Chicxulub asteroid impact 66 million years ago, thanks to the presence of debris on the skin. This is the debris that rained down on the Earth right after the impact. This may be the first fossil of an animal, which actually died that very day.

Where did the impactor come from?

The exact origin of Chicxulub impactor still remains unclear. Earlier in 2021, scientists from Harvard published a study that claimed its origin was the Oort cloud, a sphere of debris at the edge of the solar system, based on analyses and simulations they ran. Soon after, another team from Southwest Research Institute (SwRI) in Colorado determined that the dinosaur-killing asteroid formerly resided in the main belt, between Mars and Jupiter. They also found that objects with a size similar to the Chicxulub impactor possibly hit our planet once every 250 million to 500 million years.

In any case, we now know for certain that the end of non-avian dinosaurs came with the Chicxulub impactor, 66 million years ago, and that the ongoing excavations in fossil sites will continue to provide fascinating findings that will enlighten more details in the story of these marvellous creatures.