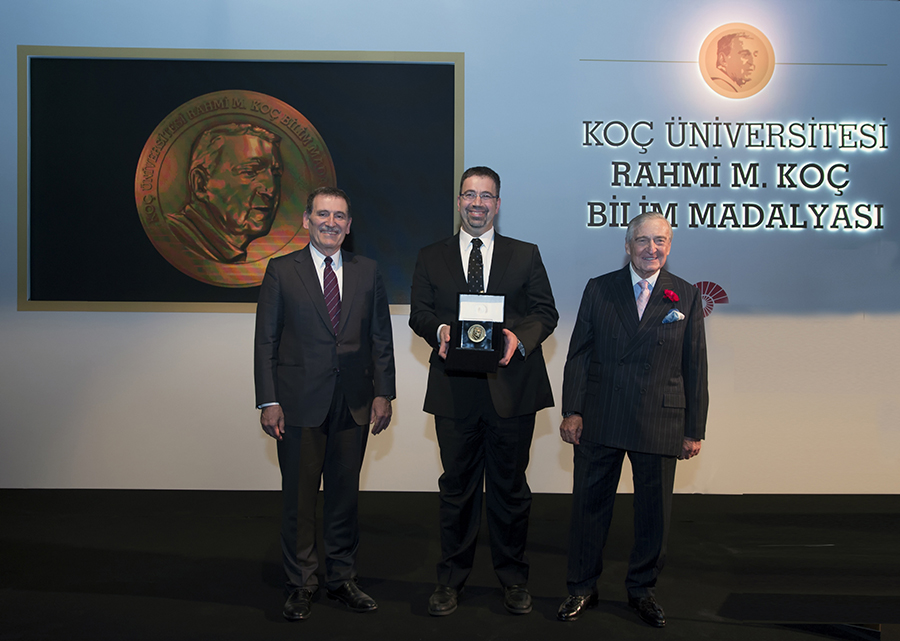 The “Koç University, Rahmi M. Koç Medal of Science” recognizes successful, pioneering scientists raised in Turkey who have contributed to the universal accumulation of knowledge both inside and outside the country, with the overall purpose of celebrating scientific progress. This year the medal has been awarded to Professor Daron Acemoğlu for his globally acclaimed work in the field of “Administrative Sciences, Social Sciences, Humanities, and Law”.

We talked to Professor Acemoğlu about the research that led to this special award, as well as his current studies and future plans.

– One of the reasons you received this award is your ‘approach to classical growth and development theories and models from a different perspective’. What makes your theories different from the classical one? What was previously not included in the equation?

The significance of growth in economics is obvious. There are several different approaches to this topic but up until 15-20 years ago, the reasons for growth were mainly attributed to economic factors. Examples include the increase in physical capital, human capital, or technological factors. These are, of course, very important. However, what are missing from this equation are the collaboration of political and economic institutions, their conflicts with each other and how those affect the economy. The novelty that I and a number of other researchers have brought to this topic over the past 25-30 years is mainly understanding how these political factors affect the economy and how institutional structures steer and change the economy as an internal (endogenous) resource. For example, when you look at classical growth theory, it doesn’t really matter whether democracy does or does not exist, or whether other political institutions are dominant. However, if you look at Europe in the 19th century you will see that this economic process cannot entirely be separated from political changes, and that the emergence of democracy here is not solely related to external elements or inevitable changes in people’s ideas and ideologies. Rather, it is a theoretical process that came to existence as a way of resolving conflicts and problems resulting from changes in the economic structures. At the same time, we emphasised that the impact of this theoretical process on economic growth, especially in terms of human resources, technological structure and distribution of income, must be a part of this equation. We worked both to incorporate these mathematically into a growth theory and to improve studies supporting or trying to understand various historical and statistical aspects of these factors.

Automation, cloud computing, big data, mobile computing, machine learning. These are relatively new elements that have or will have a direct effect on today’s labour market and labour economics. There are several debates on this topic. Some assert they will have a negative impact on salaries and labour force, while others believe they will lead to the invention of new lines of business. How do you picture the future in the light of these new working models?

This is a very good question because technology is one of the subjects I have focused on the most. Just as you do for corporations, you need to follow a multidimensional train of thought about technology, rather than unidimensional. The most important dimension of my perspective on technology for the last 20-25 years has been to emphasise that technological development may lead to increases in some wages and decreases in others, or may lead to job losses or other challenging economic conditions. So with this in mind, I work on examining and addressing how technology develops endogenously. In fact this approach is very useful in looking at automation. According to the simple technology approach economists use particularly in macroeconomics, ultimately technology is beneficial to the labour force as it always increases productivity. For the past 100-200 years, when people worried about whether ‘technology is coming, how will it change the business world’, many economists argued that technology will always enhance and increase productivity which will in turn benefit people. Over the last ten years I’ve been working to understand the impact of technology on economy in a slightly different way. In particular, I’ve looked at positioning technology not only as an element improving productivity, but also, and even more importantly, an element automating the very micro activities of labour force and using machines to do this. When you think of it this way, it becomes very clear that technology will always potentially take jobs from some of the labour force, decreasing their wages. So, if this is the case, why have productivity and wages increased alongside technological developments throughout most of the 20th century? This has happened because technology has also created new activities. In other words, there are now two tracks – one is automation and the other is the activities in which workers can work quicker and more efficiently. So long as these two proceed at the same pace, the economy grows and the effect on distribution of income is not that negative. However, this framework reveals something else. Rather than extreme positions such as ‘technology is always good’ or ‘technology will eliminate the need for a human workforce’, we need a more balanced approach. Technology always disrupts, but this disruption is balanced by the creation of new industries. There is no such rule that this balancing will always occur, especially with the incredible pace of the latest wave of automation. In fact, currently automation is having a negative impact on the human workforce and it is important we think about how we can improve and correct this. There is no sense in overreacting; neither the data nor the conceptual framework suggest that all jobs will be done by robots or that the human workforce will become obsolete.

Is it possible that we may face a new wave of Luddism*?
Luddism, or destroying machines, may come much sooner than we expect. Indeed, we need to look at this imbalance as it can lead to some major problems. First, we are not utilising our resources properly. Second, the distribution of income is worsening which is not good in terms of welfare. Third, even if you ignore all these, it doesn’t plot an efficient route for continual growth. Unless you resolve this imbalance you are likely to be faced with a significant reaction and the Luddites are such a historical example.
* The Luddites were a movement in the early 19th century in which a group of English textile workers and weavers worried about losing their jobs, destroyed weaving machinery as a form of protest.

So, in conclusion, are you suggesting it is possible technology will lead to an increase in productivity and wages?

Absolutely yes. We have already witnessed this over the last hundred years. However, this does not mean that technology will not also have negative effects. There is some dichotomy in the popular media; technology is either always good or always bad. But essentially, it is a blend of the two.

New working models and business models will no doubt lead to new conditions, both economic and political. Is this correct?

Of course, and this is what we are observing. It is not possible to understand what is happening in Europe and America without taking both globalisation and technological disruption into account.

I think in one of your latest articles, you mentioned the effects of information or notification on traffic jams. What type of problem did you set off from?

We may think of these as the products of one point of view. They have considerable technological benefits but also have many unexpected effects. These unexpected outcomes will occur because the organisation structure will be forced to change entirely leading to changes in income distribution and politics. People will have to respond to these in different ways. We also have to consider these. With certain fields we can understand this on a micro scale, like in traffic. In a more generalised fashion, it will happen exactly like we mentioned above.

Besides the obvious pride of receiving an award, what type of returns do awards yield for researchers? Do they help in finding funds? Do they provide any advantage in building collaborations with other research groups?

Awards are generally a part of communicating and conveying your ideas to other people. When these ideas reach new people and when you meet new people, it opens new horizons.

Our last question. What do you think is the most important tool for young scientists, or what important steps can be taken to give encouragement?

Resources are very important, of course, but not enough on their own. It is crucial to be open to the world, to understand global developments and react to them in a timely fashion. Even with all the resources if you work in complete isolation nothing you have will serve any purpose. In fact, neither of these are enough. Developments in the most important subjects of science grow out of the ability to think differently. To stimulate different thinking, it is necessary to have autonomy, freedom, and institutional structures that support change. For example, there is a huge flow of money to universities in China. But when you look at the scientific outcome, it is still very low quality. You can definitely find openness and resources, but there is no autonomy. There is a lot of pressure and too much scepticism against different thinking. Also of importance, to become successful people need to focus a little on subjects where they feel confident about themselves and follow their own ways – this does not necessarily mean they should follow their ideas blindly and at all costs. You need courage to do that. Of course, it is pretty difficult to create an environment with all four of these factors combined. If such things are not valued by society, universities cannot create them on their own, although it is still possible for them to create a certain microcosm of these.