Skip to content
Homepage Astronomi The Outermost Cluster of Planets 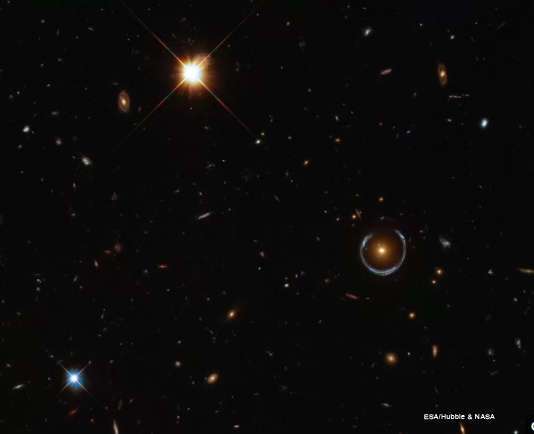 The Outermost Cluster of Planets

For the first time ever, a cluster of planets have been detected outside our galaxy, with masses ranging from as small as the moon to as great as Jupiter. According to the experts, there was no evidence until now that these planets existed.

We owe the discovery to an effect called “microlensing”, where large objects bend and magnify light from objects behind them. Modelling this highly magnified light enabled scientists to unveil the presence of a new cluster of planets. The same technique was used to detect 53 exoplanets in the Milky Way.

The newly discovered extragalactic planets are 3.8 billion light years away from us, so far away that there is no chance of observing them even with the most sophisticated telescope. The discovery was made by a team of Oklahoma University astronomers studying a quasar 6 billion light-years away (RX J1131-1231). They were intrigued by the unexpected line energy shifts in the quasar's light and suspected there might be planets in the galaxy between us and the quasar. And they were right, the galaxy’s stars turned out to be surrounded by about 2,000 unbound planets with a wide range of different masses.

Xinyu Dai is, co-author of the study published in The Astrophysical Journal, estimates that distant galaxies host around 2 thousand planets for every star. This means there are trillions of residing there, just like the billions of free-floating planets in the Milky Way.

"We are very excited about this discovery. This is the first time anyone has discovered planets outside our galaxy," the authors say, “This is very cool science."