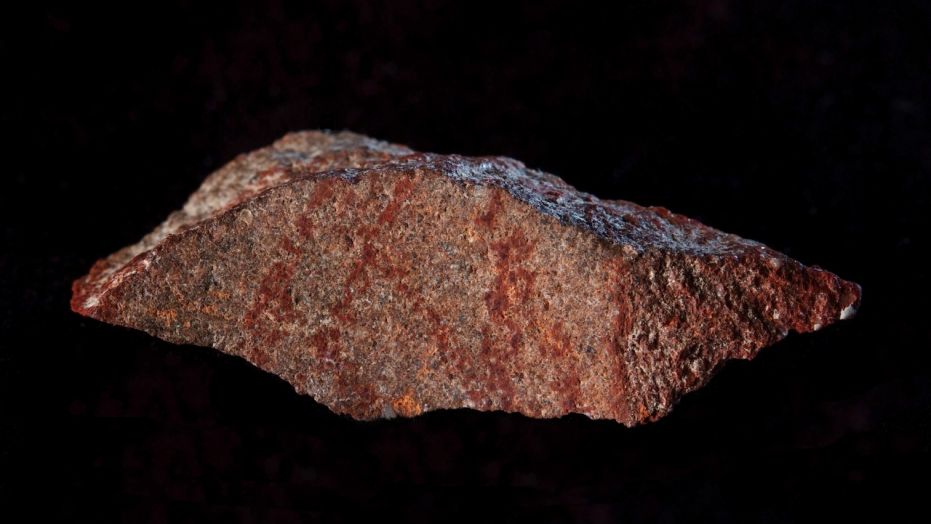 Abstract diagonal patterns found in a South African cave may be the oldest drawings on Earth. According to the scientists, our Stone Age ancestors used a piece of pigment to sketch these lines on a stone in the Blombos Cave 73,000 years ago. Until now, the oldest known drawings were the ones in European and Indonesian caves, which dated to around 40,000 years ago.

Archaeologist Christopher Henshilwood from the University of Bergen thinks that this drawing shows us that Homo sapiens virtually behaved like us 70,000 years ago. Henshilwood and his team discovered the lines while examining thousands of stone fragments, sea shells containing pigment remains, and shell beads excavated in 2011.

Microscopic and chemical analyses revealed that the lines were drawn by using a reddish pigment known as ochre. The same ochre was also used to coat shell beads.

Researchers think that the rock with red lines may be just one part of a larger and possibly more complex drawing on a bigger stone. Yet, they cannot be sure if the drawing represents an abstract idea or depicts something from real-life. Paul Pettitt from Durham University says, “If there is any point at which one can say that symbolic activity had emerged in human society, this is it”, while archaeologist Maxime Aubert suggests another possibility: The drawing may have accidentally resulted from people’s efforts to sharpen the tips of pigment chunks. Still, Henshilwood refuses Aubert’s view as the shell beads can also be regarded as more evidence of our ancestors’ capacity for symbolic thinking.

Gerrit van den Bergh, another archaeologist concludes, “It is likely that further evidence for early symbolic behaviour will be found in the very near future.”