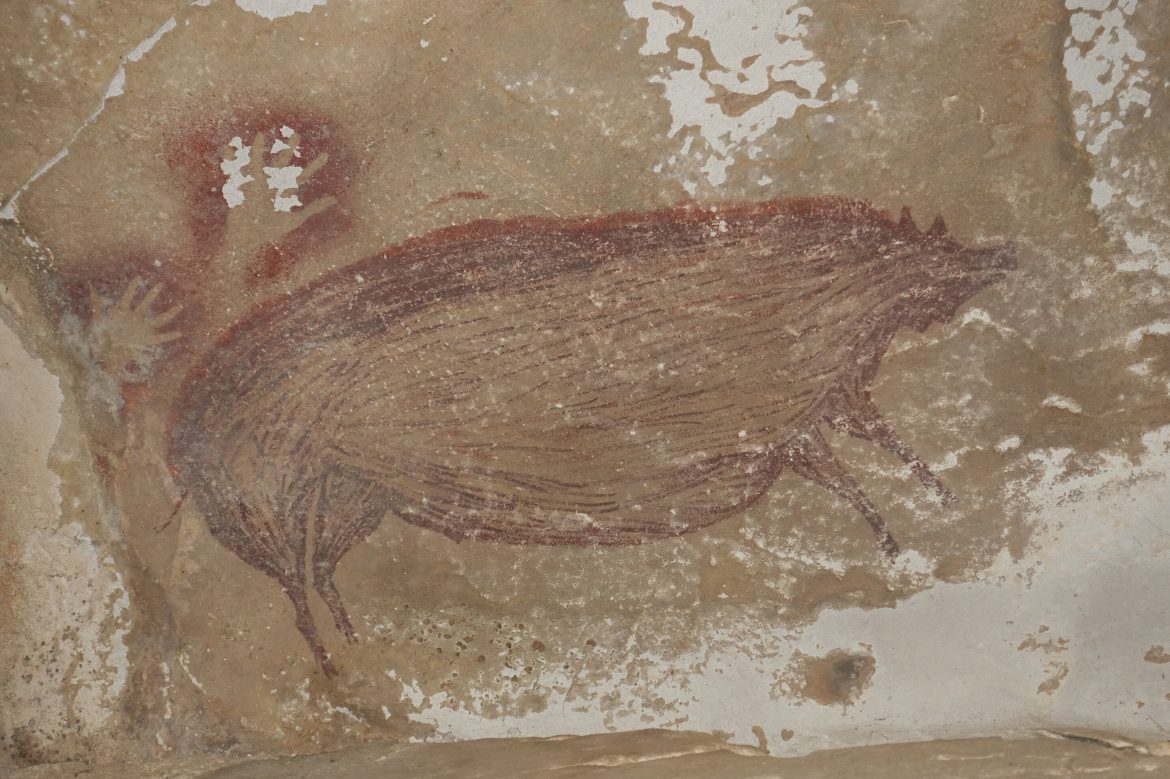 Although the oldest cave painting examples generally belong to the ice age Europe, recent discoveries in Asia suggest that this tradition may have originated in Asia or Africa rather than Europe. A new painting unearthed on the Indonesian island of Sulawesi supports this argument. The painting, depicting a warty pig still living in the region, is estimated to be at least 45,500 years old, qualifying for being one of the earliest known depictions of a real-life creature or object.

The painting resides in Leang Tedongnge cave, which is an hour’s walk from the nearest road, and protected by steep limestone cliffs. The cave can only be accessed during the dry season and was never seen before by anyone other than the local Bugis community, living in isolation.

Painted with dark red pigment, the 136×56 cm pig figure has two more pig companions by its side, although the other two are not well-preserved. The entire depiction is thought to reflect a scene of social interaction among animals. These wild pigs have been hunted in the region for tens of thousands of years, and are one of the most common subjects in prehistoric art.

To figure out the age of the pig, the calcite layer formed on the painting was analysed using the Uranium isotope dating method. However, since only the top layer can be dated, the age of the lower layers is uncertain, and it could be much older. A few years ago, the same team had found another cave painting in Sulawesi, and that piece of art was dated to be at least 43,900 years old -by using the same method. Various paintings have been discovered in other caves on the island, which is thought to be between 32,000 and 73,400 years old.

Although not certain, researchers think these paintings were made by modern humans, the Homo sapiens. If the dating technique was performed without any errors, it is currently considered to be the oldest cave settlement in the region, with the potential of being an important step in illuminating questions about how people got to Australia.

It is estimated that the traditions of cave art in the region did not become invented all of a sudden, but were brought by people who migrated from the mainland to the islands, and from there to Australia 60-70 thousand years ago.

In one corner of the painting, there are human handprints possibly belonging to the artists. These handprints may have been made by spitting liquid paint on the hands after resting them against the cave wall, which brings us to the next goal of the researchers: obtaining and analysing DNA samples from saliva residues.