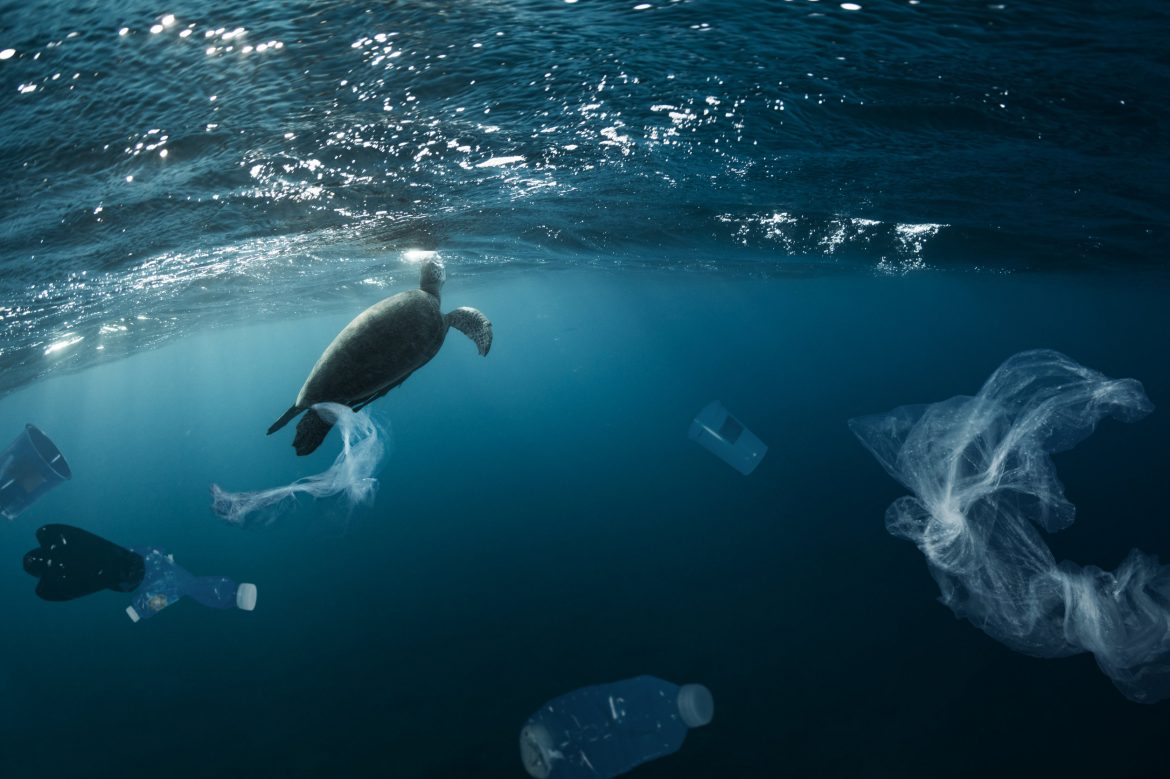 The famous garbage vortex in the Pacific Ocean continues to amaze scientists with its rich biodiversity. The blue sea dragon (Glaucus atlanticus) is just one of the species thriving in this ecosystem.

The Great Pacific Garbage Patch is the world’s largest floating marine garbage accumulation, located approximately between the US states of Hawaii and California, and often described as “twice as large as Texas”. While this description makes one think of an enormous island of garbage, a large part of it (94%) actually consists of microplastics on or just below the water surface, in a dispersed state. Experts estimate that 80% of the patch originates from land-based plastic wastes, and that in fact, 70% of the debris reaching the oceans sinks to the ocean floor.

Discovered by oceanographer Charles Moore in 1997, the Great Pacific Garbage Vortex is actually comprised of two separate accumulations in the eastern and western parts of the Pacific Ocean, which are linked together by a current created by the convergence of warm waters in the south and cool waters in the north. A number of initiatives have been the debris as they are thought to cause major damage to ocean ecosystems (www.theoceancleanup.com, for example). But the adaptive ability of life can create a rich diversity even in the midst of such massive human-induced pollution. Therefore, there is now a concern that clean-up efforts may also harm existing sea creatures. A new study, which is yet to go through peer-review, suggests that the resources should focus on not creating new waste rather than trying to clean it up (Roughly, 14 million tonnes of plastic enter the oceans each year).

In 2019, an expedition called The Vortex Swim set out from Hawaii with the aim of collecting data on these garbage patches, and ended up discovering a number of creatures living on the ocean surface, including the blue sea dragon (Glaucus atlanticus), Portuguese man-o-war (Physalia physalis), the violet sea-snail (Janthina janthina), and Velella velella, a close relative of jellyfish. The study’s co-author Rebecca Helm says that this surface ecosystem and its creatures, called the neuston, are transported by ocean currents, so it is not surprising that they coexist with debris carried away by the same currents. Despite being a major and shameful disappointment concerning the current state of humanity, these debris accumulations have become important habitats for both marine creatures and seabirds that feed on them. For this reason, projects that aim to collect garbage from the oceans also collect various marine creatures, suggesting that we should perhaps adopt a different perspective on this issue.

According to an article published in 2021, many coastal creatures have also managed to survive on these accumulations, protected from the harsh conditions of the open sea. The investigations have shown that the floating garbage hosts over 40 species of coastal creatures, including mussels, starfish, isopods, molluscs and a variety of crustaceans. The presence of these coastal creatures in the open ocean at such high diversity raises questions for ocean ecosystems, because we still have no clear idea regarding how far these creatures, which normally cannot travel such long distances, can be transported.

Regardless of the impacts on the ecosystem, scientists agree that no more plastic waste should enter the seas. Moreover, cleaning such a large area does not seem economically feasible. Microplastics are very difficult to capture and collect. According to NOAA, 67 ships need to operate continuously for a full year to clear only less than 1% of the North Pacific.

Worried about the Great Pacific Garbage Vortex and inspired by the famous Kon Tiki voyage, National Geographic explorer David de Rothschild built a large catamaran with plastic bottles in 2010 and named it Plastiki. His intention was to raise awareness about this sea of ​​human-made garbage, and to show the durability of plastic waste and how it can be reused creatively. With this boat, he departed from the coast of California and ended his journey in Sydney, Australia.

Also worth noting, is the fact that the Great Pacific Garbage Patch is not the only garbage accumulation in the oceans, but the biggest of all. Similar, but smaller, garbage patches are present in the Atlantic, Indian Ocean, and the North Sea. Communities that may have started to live “on” them is a concern for the scientists. Although it may seem a bit exaggerated, the claim that these communities living so isolated from other species may perhaps follow a separate evolutionary path, as is the case in the Galapagos Islands.