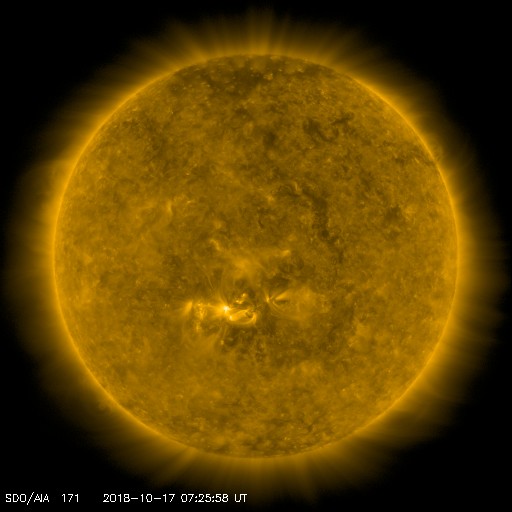 Author Erol Özlav October 17, 2018
Science Fields
astronomy
Tags
AR 2720,Carrington Super-flare,sun spot,solar activity
Most interesting sun observation news from 2018 are all about what didn’t happen. 55% of the past days in 2018 were recorded without sunspots. The ongoing solar cycle 24 was supposed to end around 2019-2020 but the latest observations suggest 25. cycle may be starting earlier than expected.

Observing solar activities from the ground and space-based stations today is very important for our technology-dependent society. Solar flares carry dangers for GPS, satellites, and astronauts currently in space. Airline workers and even passenger are subjected to raise radiation levels during solar storms, especially on trans-polar flights. If an event like the Carrington Super-flare were to happen today it would wreak havoc.

24. solar cycle that is reaching its end has been anything but normal from the start. The transition from 23. to 24. in the year 2008 saw 268 days without sunspots which are a record minimum of 100 years. The cycle 24 produced only a few interesting spots and now as the transition to 25. nears, 2018 already had 132 spotless days as of 29th of August. This can mean that 25. cycle will be low in action.

Active sun spot region AR 2720 defied the overall trend for 2018 before it rotated around the solar limb and out of view. Does that mean the next cycle is due before its time?

There are two factors that tell us a new cycle has arrived: the appearance of new sunspots at relatively high solar latitudes, and the reversal of the Sun’s magnetic field. The first factor is easy to observe in the visible spectrum and has been done for a long time. The second factor had to wait for 20th -century technology observatories to unfold. The effect of Sun’s magnetic field on sunspots dark and light regions and their movement was observed as changing through solar cycles. Active region 2720 showed a bright leading edge matching its counterpart in the southern hemisphere suggesting that the sun has switched its magnetic polarity. But their latitudes are still close to the solar equator which suggests otherwise.

Another anomalous spot is seen in April also looked like it belonged to the next cycle.

As we wait in excitement for AR 2720 to appear around the solar limb here are some links to get informed about current conditions on our beloved star: