Skip to content
Homepage Astronomi Star That Grazed The Sun 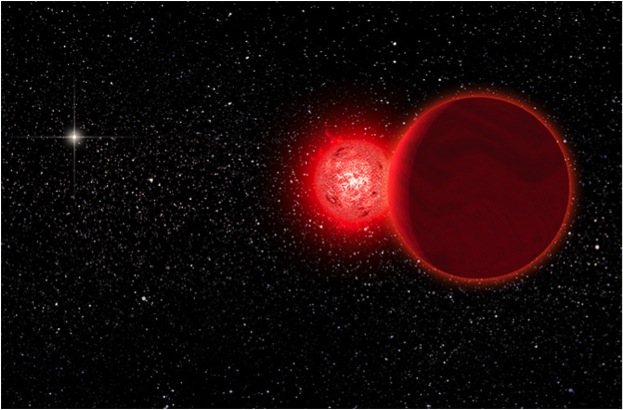 Star That Grazed The Sun

Dwarf star and companion dashed through the Oort Cloud

Studying the motion  of a recently-discovered star, astronomers  have concluded that the star, currently 20 light years from Earth speeding away at the constellation Monoceros  (the unicorn), had passed through the Solar System together with its faint companion 70,000 years ago. Dubbed “Scholz’s Star”, the interloper is a red dwarf star with only 8 percent of Sun’s mass. Its companion, a “brown dwarf”, or a failed star which lacks the minimum mass to start fusion reactions at its core, weighs only as much as 6 percent of the Sun. In the artist’s concept above, the pair, with the star faintly glowing behind the brown dwarf, pass by the Sun which is shown as a very bright star at left. The flyby should not be taken too literally, since the pair passed at a distance of 0.8 light years. This corresponds to roughly 8 trillion kilometers, which, still is a short distance in cosmic scales. By comparison, the distance between the Sun and its nearest neighbor, Proxima Centauri, is 4.2 light years.

The star took its name from German astronomer Ralf Dieter Scholz who discovered it in 2013.

An international team of astronomers led by Eric Mamajek of the University of Rochester carried out 10,000 computer simulations on the star’s close passage. Results show that the pair has passed through the Oort Cloud, a hypothetized spherical structure made up of trillions of comets surrounding the Solar System. The star and its companion passed through the relatively sparse Outer Oort Cloud in almost all of the simulations, and only once it zipped through the more-populous Inner Oort Cloud. Thus, it has not caused any discernible turbulence. Otherwise, it could have caused a rain of comets on the inner Solar System, some of which could impact the Earth.

Scholz’s star is 50 times fainter than the dimmest star one can see with naked eye in a dark night.  But being hyper-active magnetically, it produces giant flares. So, if there had been people looking at the patch of sky where it was 70.000 years ago, they might have noticed a star whose brightness occasionally increased 1000 times, the authors say.