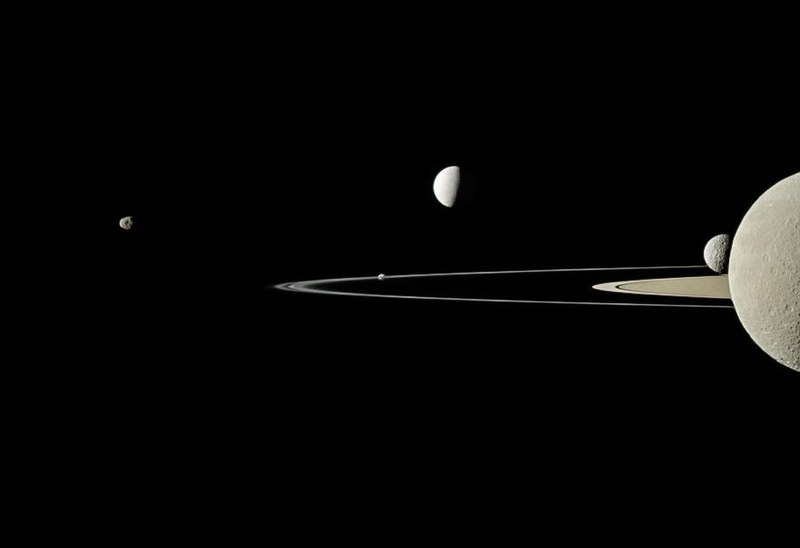 The known satellite numbers of the planets in our Solar System are quite unbalanced. While the Earth has only one satellite (although we should note that various asteroids, from time to time, become our companion for a while and then move on with their journey), Neptune has 13, and while the number of satellites orbiting Mars is only two, 27 celestial bodies orbit Uranus. Of course, the two giant planets in our system lead the way; Jupiter and Saturn, with their never-ending companions, have the highest number of satellites in the Solar System. Although Jupiter had the throne for a long time, recently analysed observation results have proved that Saturn is the new king.

It took years for Scott Sheppard and his colleagues at the Carnegie Institute of Science to confirm that some of the spots detected in the images taken by the Subaru Telescope in Hawaii from 2004 to 2007 are actually satellites orbiting Saturn. Comparing the positions of these celestial bodies over time, the team found that three of the newly discovered satellites are orbiting Saturn in the same direction of the planet’s own rotation (prograde), and 17 are moving in the opposite direction (retrograde). Each of these 20 new objects added to Saturn’s already-crowded satellite list has a diameter of 2 to 5 kilometres.

With this discovery, the number of Saturn’s known satellites rose to 82, leaving Jupiter behind with its 79 satellites. Considering researchers believe that Saturn does have more than 100 satellites, the chances of this order changing in the future is quite slim.

Saturn’s outer satellites are divided into three clusters based on the angle of inclination of their orbits around the planet. Two of the newly discovered prograde moons belong to the Inuit group, which have inclinations of about 46 degrees. These satellites may be the remnants of a larger satellite, which broke apart in the distant past. Similarly, the newly announced retrograde moons have similar inclinations as the previously known retrograde Saturn moons, which indicates that they too were a part of another former, larger satellite. These lively moons are part of the Scandinavian group, with names coming from Scandinavian mythology.

“The fact that these newly discovered moons were able to continue orbiting Saturn after their parent moons broke apart indicates that these collisions occurred after the planet-formation process was mostly complete and the disks were no longer a factor,” says Sheppard, who also discovered 12 new moons orbiting Jupiter last year.

We wrote about the naming process of these satellites in KURIOUS. These 20 new moons of Saturn will be named after the giants from Inuit, Scandinavian, and Celtic mythology.