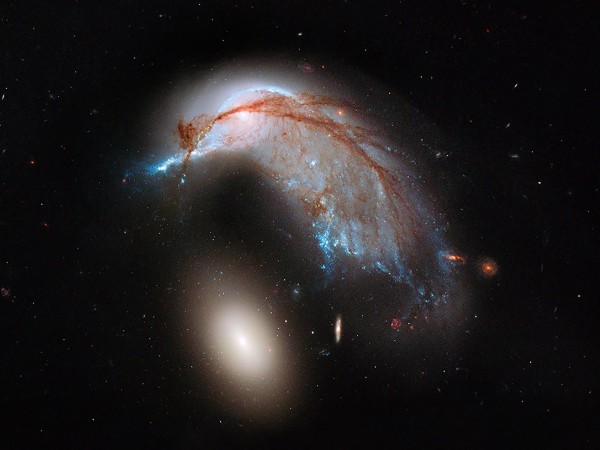 Despite the folklore that the stars in the night sky are countless, astronomers say the number of ones we can see with naked eyedo not exceed 8000. Yet, we know that the number of stars in our galaxy alone is 300-to-400 billion. The majestic Milky Way is among the relatively rare giant ellipticals. The visible universe (the part the light has so far traversed after the universe expanded with superluminal speed [faster than light] fractions of a second after the Big Bang which created the universe 13.8 billion years ago) is thought to contain at least 100-to-200 billion galaxies big or small. As each harbors billions of stars, calculate the total if you can! To spare the trouble to the enthusiast and give an idea about the number of the stars in the universe, the astronomy community keeps an approximation at the ready: The stars are as many as each sand grain in all of the beaches on Earth! But it now seems that we shall have to multiply the total by two. For, a new study half of the stars in the universe are “rogue” stars wandering by themselves in the void (and hence, are not visible to telescopes).

To find the earliest galaxies (hence, farthest and invisible), astronomers James Bock (Caltech) and Asantha Cooray of the University of California (Irvine) began studying what is called extragalactical background light (EBL), which is made up of the accumulated light of all the stars in the history of universe and extends in wavelengths from ultraviolet, through optic (visible) to infrared light. To obtain that light the foreground light from the Milky Way and other nearby sources are extracted. For that, the researchers and their team developed a detector called Cosmic Infrared Background ExpeRiment (CIBER), which is lifted by rockets to the edge of the space, where they collect images with two 11-cm telescopes.

When they studied the images, researchers realized that the fluctuations (in intensity of light) did not match the known light sources in the remote background. Their conclusion, published in Science, is that EBL looks made up not of the primordial galaxies and black holes, but of the light of stars dispersed into the intergalactic space.

According to Bock and Cooray, widespread disruptions caused when galaxies collide (like the picture at top) catapult large numbers of stars to empty space to spend their lives as wandering tramps.

The scenario does not appear, however, to have convinced Samuel Moseley, a NASA astronomer whose team had earlier explained the fluctuations in the EBL with the early galaxies and black holes. Moseley points out that some X-ray sources discovered by Chandra telescope appear coinciding with the galaxies and black holes in their model. Besides, Moseley says, the speculated existence of vast numbers of rogue stars filling the voids would entail supernova explosions occuring wherever you look. This, he adds, will be a way of testing the proposed thesis.