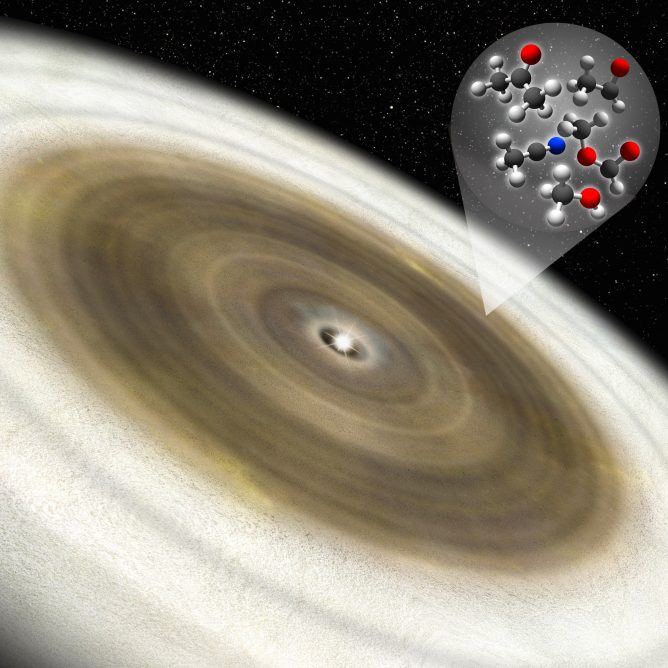 Organic Molecules from a Young Star

Scientists using the ALMA (Atacama Large Millimeter/Submillimeter Array) telescope in Chile identified a variety of complex organic molecules around a young star called Ori V883 star. A sudden eruption in the star is creating a flow of different molecules from the icy compounds in the planet-forming disk. The chemical structure of the disk resembles that of the comets in the solar system. Sensitive ALMA observations allow us to understand the evolution of organic molecules from the birth of the Solar System to objects we see today.

The sudden flare of the young star, which is approximately 1300 light-years away, is converting the frozen molecules of the planet formation disc around it into gas. This provides an important opportunity to examine the structure of these molecules.

The region, where the frozen molecules around a young star reach the level of sublimation, is defined as “the snow line”. While the radius of a snow line around a normal star is only a few astronomical units, it can grow by 10 times when an exploding star is in question. Only then, it gives us the chance to examine these molecules with the telescopes we have.

Thanks to the sharp observation tools of ALMA and the expanding snow line, scientists were able to identify 5 different kinds of organic molecules: methanol (CH3OH), acetone (CH3COCH3), acetaldehyde (CH3CHO) methyl formate (CH3OCHO) and acetonitrile (CH3CN). Thus, for the first time, the presence of acetone in the planet-forming region, a.k.a. the protoplanetary disk.

Ice containing frozen organic molecules may be closely related to the origin of life on planets. Comets in our solar system are being examined especially because of their rich icy compounds. For example, the European Space Agency’s famous comet explorer Rosetta had found rich organic compounds around the comet Churyumov-Gerasimenko.

Since rocky and icy planets are composed of solid materials, the chemical structure and the richness of organic molecules of the protoplanetary disks are crucial for understanding the formation of life in young star systems.