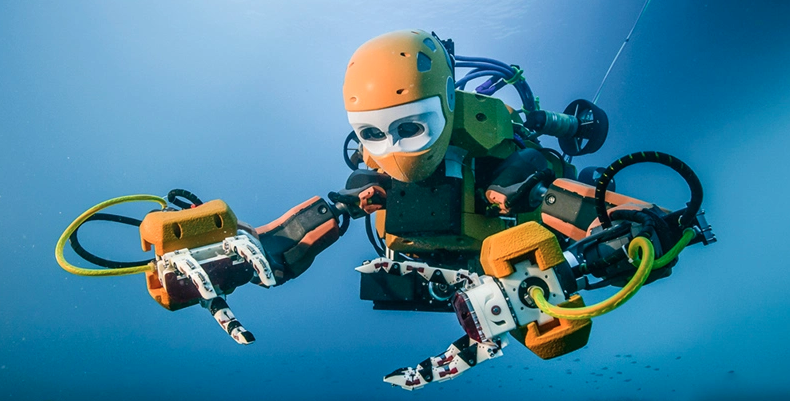 Scientists from Stanford University have developed a new kind of robot that can explore the mysterious depths of the ocean. The robot’s most striking feature is its impressive ability to dive underwater to a depth of 1 kilometer.

Known as OceanOneK, the robot is notable for the human-like structure of its upper body, including arms functioning like those of a human. Besides the humanoid top half, the robot’s back is slimmer and fitted with eight multi-directional thrusters that allow careful maneuvering underwater.

During a test dive down 500 meters deep in the Mediterranean this month, the robot’s tactile feedback system and stereoscopic vision produced incredibly realistic sensations equal to what the controlling researcher would experience below, rather than in a control vessel up at the water surface. Looking through OceanOneK’s robotic eyes and feeling with its hands underwater, roboticist Oussama Khatib perceived the pink, green, and rusty-orange life on and around the ship; felt the resistance of the water, and was able to discern the shapes and proximity of the historical relic around him.

OceanOneK’s journey to these depths has two purposes: to explore previously unexplored regions and to show that human touch, vision and interaction can be transmitted to places far from human reach.

“This is the first time that a robot has been capable of going to such a depth, interacting with the environment, and permitting the human operator to feel that environment,” said Khatib.

OceanOneK’s predecessor, OceanOne, was built to reach depths of up to 200 meters. To bring the robot deeper, the researchers adapted its body with special foam made of glass microspheres that provide buoyancy while being capable of withstanding the immense pressure at 1 km depths, which is over 100 times the pressure at sea level.

The OceanOne project not only embodies advanced innovations in haptics, underwater robotics, and human-robot interaction but also new opportunities for marine science and underwater engineering activities, such as inspecting and repairing boats and infrastructure including bridge piers and submerged pipelines.