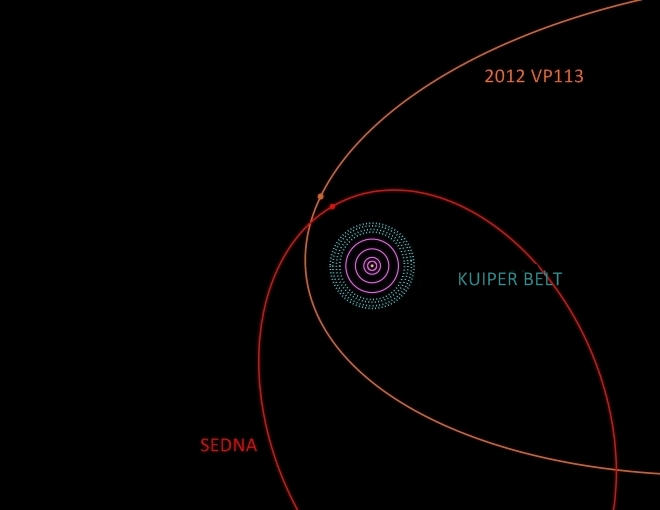 The announcement March 27 of the discovery of a second dwarf planet has consolidated the evidence that the solar system extends far beyond the Kuiper Belt, a disk-shaped reservoir of comets and other icy bodies ─some nearly as massive as Pluto─ that lies outside the orbit of Neptune.

More dramatically, the discovery suggests the potential presence of a giant planet, possibly up to 10 times the size of the Earth, influencing the orbit of the newly-discovered body and those of other objects speculated to populate a hypothesized another belt of icy debris from the formation of the solar system placed way out.

The newcomer, provisionally called 2012 VP113 (which the public was quick to christen Biden after the current U.S. vice president because of the VP initials) is calculated to move on an orbit whose closest approach to the sun lies 80 AU and is estimated to have a diameter of 450 km.(AU, standing for Astronomical Unit,  is a standard distance measure in astronomy, corresponding to the mean distance between the Earth and the sun, which is approximately 150 million kilometers). Thus its orbit lies even farther than that of larger (995 km wide) Sedna, discovered in 2003 at its closest approach which was  measured to be 76 AU.

Astronomers hypothesize that the Oort cloud was formed by solar disk debris orbiting closer to the nascent sun, but was later hurled outward by the chaotic gravitational interaction of the gas giant planets. The inner Oort cloud is thought to extend 2000-20.000 AU as a torus-shaped disk and populated by hundreds to thousands times more cometary nuclei than the spherical outer Oort  cloud lying out 20.000-to-50.000 AU (100.000-to-200.000 AU in less conservative estimates). The outer cloud is believed to be home to several trillion icy objects (composed of various ices as water, methane, ethane, carbon dioxide, or hydrogen cyanide) of roughly one kilometer size and billions of others with up to 20-kilometer sizes. The individual objects are speculated to lie tens of millions of kilometers of each other. Despite these huge numbers, the total mass of the outer cloud is estimated to be only five Earth masses, giving an idea of its sparse composition. No estimates have been ventured as to the mass of the inner Oort cloud. The outer cloud, at these great distances, is vulnerable to the gravitational effects of passing stars or of the Milky Way itself. These effects are thought to dislodge some of the cometary nuclei from their orbits into the cloud and send them toward the inner solar system on long voyages at random inclinations (contrary to the orbits of Kuiper Belt objects conforming to the plane of the planetary orbits) lasting thousands-to-billions of years, or catapult them into outer space, depleting the cometary stock. Constant infusion of fresh material from the inner cloud is speculated to restock the outer Oort cloud and explain how it could have maintained itself throughout billions of years since the formation of the solar system.

The solar system has long been described as composed of three distinct sections whose extents are traditionally given in multiples of AU.

Rocky planets like Earth and asteroids are nearest to the sun with orbital distances ranging from 0.39 to  4.2 AU.

Gas giants are distanced 5 to 30 AU, and the Kuiper Belt, made up of thousands of icy bodies ─ including Pluto which was demoted from planethood to “dwarf planet” status in 2006 ─ extending to 30 -50 AU.

Beyond this only another dwarf planet, Sedna, had been discovered until now, not counting five other, much smaller bodies.