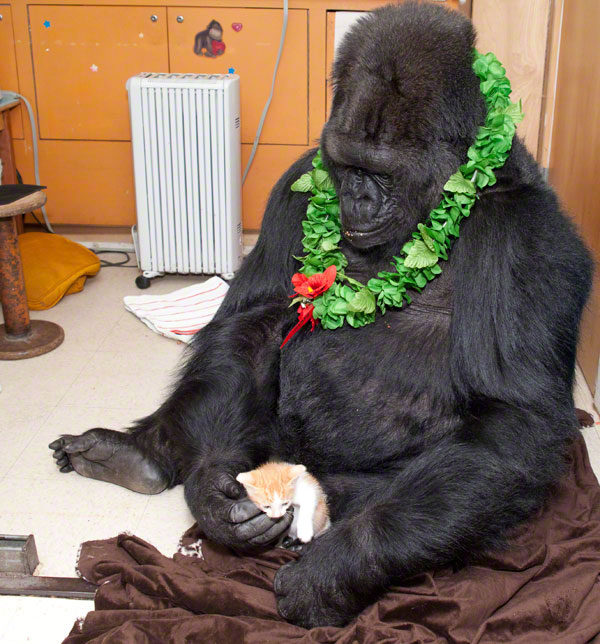 Koko, the gorilla lady famous for her ability to communicate using American Sign Language and her love for kittens, died in her sleep on June 19, at the age of 46. Millions of people mourned her passing with sincere messages from all around the world.

The beloved Koko was a western lowland gorilla, a common species of gorilla in Africa. She was born at the San Francisco Zoo on July 4th, 1971. Her original name was “Hanabi-ko” (Japanese for “fireworks child” because of her birth date) but the alias “Koko” quickly became more popular. Animal psychologist Dr Francine “Penny” Patterson began working with Koko the following year and started teaching her sign language as part of her primate linguistic studies. Patterson remained her trainer for the rest of her life.

She quickly began using the sign language to communicate her thoughts and feelings. According to Dr Patterson, Koko was able to understand and use more than 1,000 different signs, with an additional ability to respond to about 2,000 words of verbal English. She was said to have an IQ of between 75 and 95 (the average human IQ on many tests is 100).

Koko became the subject of numerous documentaries and appeared as the cover star for magazines including National Geographic. She also made friends with celebrities, including Robin Williams, the Red Hot Chilli Peppers bassist Flea, the actress Betty White, and the famous TV personality Mr Rogers.

She gained public attention for her care for cats. Koko asked for a cat for Christmas in 1983 and eventually adopted a baby tabby, which she named “All Ball” (she was said to like rhymes). She treated the kitten like her own baby, nurturing it and carrying it around. When her little friend was hit and killed by a car in 1984, Koko signed: “cat, cry, have-sorry, Koko-love.” She cared for many other cats during her life.

Although some scientists were sceptical about her communicative skills, she also displayed grief when she was told about Robin Williams’ passing in 2014. Patterson reported that Koko was “quiet and very thoughtful” upon hearing the sad news about Williams, with whom she once laughed and cuddled.

In 1976, Patterson adopted Koko and established The Gorilla Foundation in Redwood City, CA. Koko lived most of her life at the Foundation’s preserves and died peacefully in her sleep at the same place. “Koko touched the lives of millions as an ambassador for all gorillas and an icon for interspecies communication and empathy,” stated the Foundation, “She was beloved and will be deeply missed.”

Koko actually lived a very long life, compared to the average lifespan of gorillas in the wild (35-40 years), and definitely gave us a valuable insight about how another species may think and feel. She once called herself a “fine-gorilla-person”, and how correct she was!