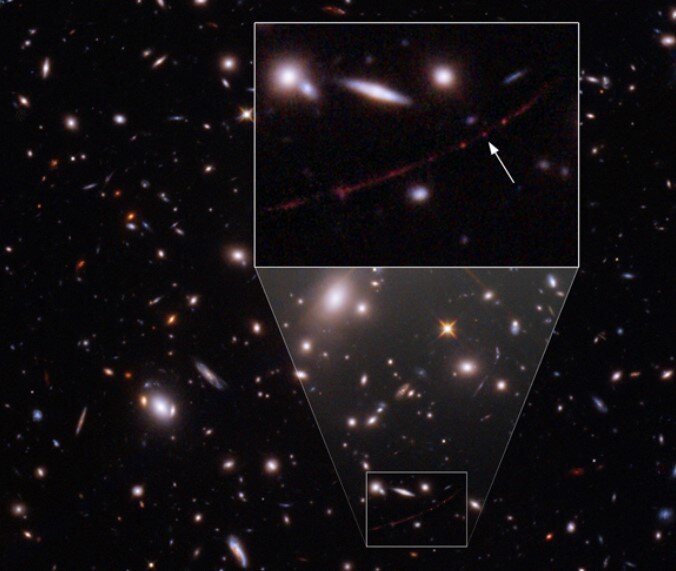 Astronomers have discovered a star almost at the other end of the observable universe. The ancient celestial body, thought to be either a single or double star system is 28 billion light-years away from Earth, making it the most distant star ever detected. It is estimated to be 500 times larger and millions of times brighter than our Sun. It was named Earendel, meaning “morning star” or “rising light” in old English.

According to the article published in Nature, the image of the star, captured by Hubble reflects its state 12.8 billion years ago, approximately 900 million years after the Big Bang. Given that a star of this mass can only exist for a few million years, Earendel must have exploded and vanished into oblivion billions of years ago.

The difficulty of making such a discovery can be easily understood when you consider that even the most powerful telescopes can only single out certain very bright stars in the nearest galaxies, besides the stars in the Milky Way. However, thanks to the amazing natural phenomenon known as “gravitational lensing,” astronomers were able to spot a star at a distance where it’s difficult to detect even giant galaxies.

One of the phenomena predicted by Einstein’s theory of relativity is that mass can “curve” the fabric of space. When light passes near massive objects, it changes direction by following this curved space. If there is a massive object between us and a distant light source, that object can deflect light and focus it towards us like a lens.

And thus, an international team of astronomers was able to detect the star, when the galaxies in a cluster named WHL0137-08 happened to line up in a way that focused the light of it alone towards us, and with the aid of a nine-hour exposure time by the Hubble Space Telescope.

Such discoveries are very important for cosmological studies, as they serve as a window into the early universe. The previous record belonged to a star that existed when the universe was around one-third of its current age when most of the current structure of the universe had already formed and evolved. This is why Earendel is indeed a groundbreaking record.