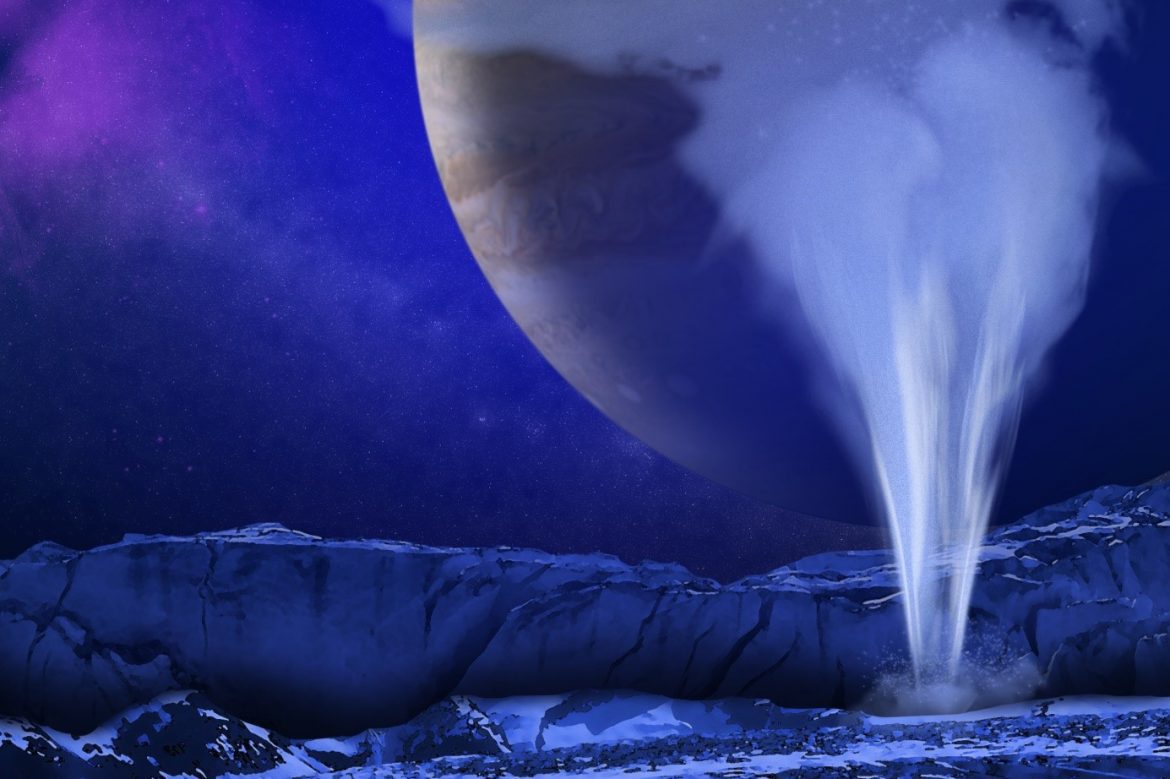 Holds twice as much water as the Earth’s oceans…

Using NASA’s Hubble Space Telescope, astronomers captured images suggesting that Europa, one of the four large moons of Jupiter, was spewing vapor into space from the vicinity of its south pole.

Previous observations had provided signs that Europa, its surface criss-crossed with long cracks, was harboring a warm and briny global ocean atop a hot rocky mantle.

Europa’s ocean is thought to contain twice the volume of water in Earth’s oceans lying under a crust of very cold and hard ice of unknown thickness. The warm, liquid water is known to upwell from the cracks caused by the stresses of Jupiter’s huge gravitational pull and subsequently freeze on the surface.

Astronomers consider Europa to be one of the most promising objects to support life in the Solar System.

Plumes of ejected water vapor were detected in images taken during observations by astronomers from the Space Telescope Science Institute to see whether Europa holds a tenuous atmosphere. The technique used was based on expectations that the moon would cause a slight but measurable dip in the intensity of light from Jupiter as it passed in front of the gas giant.

In three of the 15 observations made over a 10-month period, what looked like plumes of vapor spurting out were detected near the moon’s South Pole. In the absence of pressure in empty space, ice and liquid water immediately turn into gas (vapor) in a process called sublimation.

The plumes were seen to rise some 200 kilometers above the surface. The gas is later thought to “rain” onto the surface.

Although NASA’s long-term plans incorporate plans for landing probes on Europa’s surface to drill through the ice crust to the ocean underneath, astronomers hope that spacecraft put in orbit around the moon could pass through the spewed vapor and harvest data about the properties of Europa’s ocean without drilling through the thick crust, which poses many technological hurdles.