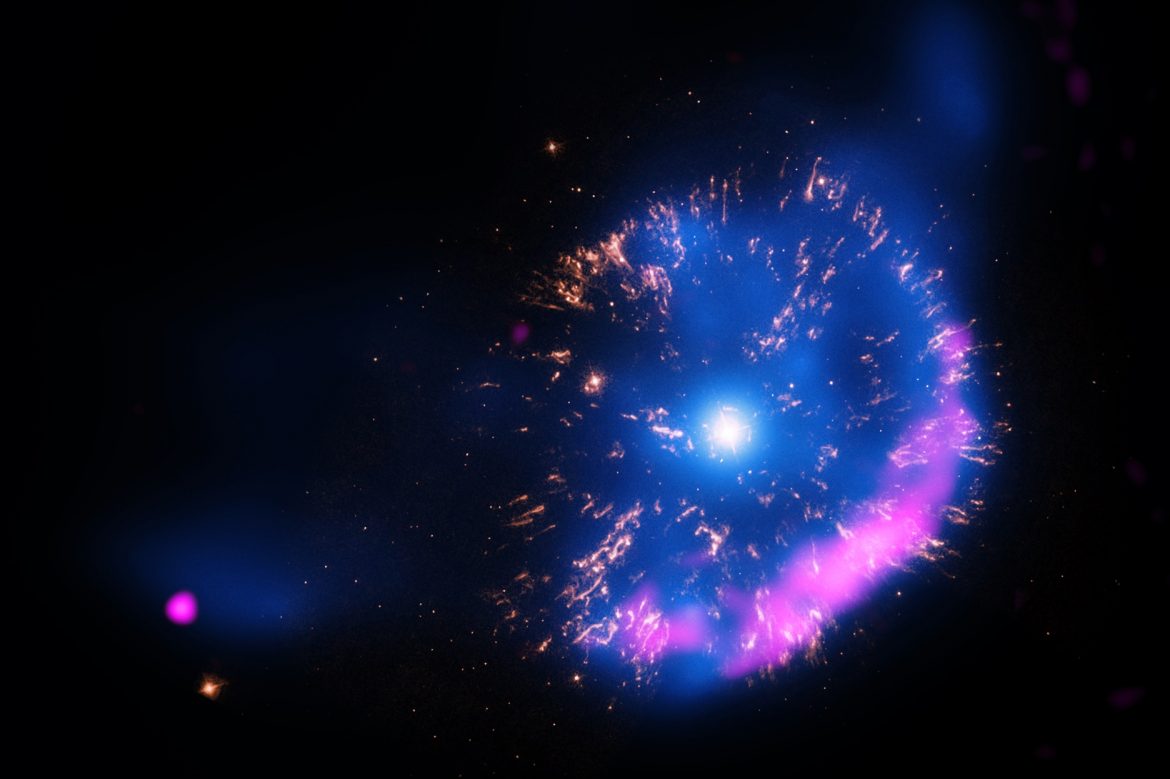 When dead star steals too much from its companion…

NASA, released this spectacular image, taken by the Chandra X-ray space telescope, of the expanding debris of a thermonuclear detonation on a dead star, called a nova explosion. Thermonuclear explosions are associated with hydrogen bombs on Earth, but the cosmic ones like the one shown above are actually Earth-sized bombs.

Nova explosions occur on the surfaces of dense and hot exposed cores of Sun- like stars shrunk to about Earth size, called “white dwarfs.”

Mechanism works thus:  In a binary star system the white dwarf remnant of the more massive star which exhausted its fuel and died earlier, starts accreting gas from the bloated outer layers of the companion star when it too nears the end of its stable phase and puffs up   into a “red giant” tens

of its original size. When the gas, raining on the white dwarf from the accretion disk formed around it reaches a critical density, the envelope which engulfs the dwarf ignites in a thermonuclear explosion. The ensuing shock wave rips into the interstellar medium in supersonic speed, heating the gas it encounters and causing it to glow.

Despite the enormity of the nova explosions on white dwarfs, they are nothing comparable to type 1a supernovae, which, also occurring on white dwarfs, result in their complete obliteration. This type of supernovae develop in accord with the same scenario and when the white dwarf,  typically of 0.6  solar mass, approaches the critical threshold of 1.4 solar mass,  a runaway thermonuclear  reaction starting at the dwarf’s core and moving outward with lightning speed completely  unbinds the dwarf.  A more frequent progenitor of Type 1a supernovae, however, is the merger of two white dwarfs in a close binary.  In both cases, the pressure of the accreted mass above the threshold limit heats up the core of the carbon-oxygen dwarf to over a billion degrees Celsius, first initiating the carbon fusion, followed by oxygen fusion. The tremendous energy release triggers a shock wave which hurls all the matter of the shattered dwarf to space to form heavier elements. The ejecta turns into radioactive nickel-56, which decays into iron -56 through radioactive cobalt-56. The radioactive decay gives the type 1a supernovae their characteristic nearly uniform luminosity. Most of the iron in our planet and throughout the Milky Way comes from this type of supernovae.  Novae, on the other hand, do not cause much disturbance to the white dwarf, so they can repeat several times during the course of accretion.

The novae Chandra has observed occur on an object called GK Persei 1500 light years away in the constellation Perseus and are repeated every three years.

Chandra observed the nova debris twice in 2000 and 2013. Between the two dates, the ejecta hurled into space moved out with a speed of 1.1 million kilometers an hour. This means that the shock wave has travelled 144 billion kilometers in 13 years. The gas, expanding to the ever-thinning interstellar medium was found to have retained its million degrees Celsius temperature.