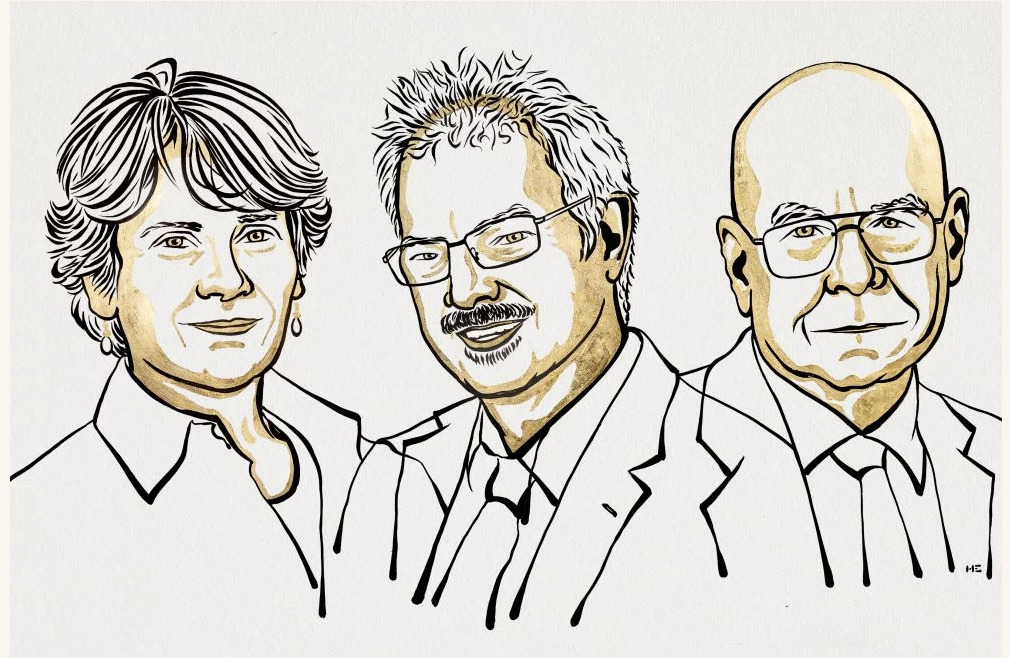 This year’s Nobel Prize in Chemistry was awarded to Carolyn R. Bertozzi, Morten Meldal and K. Barry Sharpless for the development of click chemistry and bioorthogonal chemistry.

Think of Lego blocks, and how they snap together easily and quickly. Now, imagine the individual blocks were molecular building blocks. Chemists have always been fascinated by the thought of building complex molecules, which interprets as the opportunity to artificially recreate natural molecules with desired properties, particularly ones that have medicinal or economic significance. However, this process is normally quite complex, requiring a lot of time and funding. It entails figuring out how to put different parts of compounds together, forming actual and functional chemical bonds that link atoms together in the correct way to form the correct desired product. Then, there arethe unwanted by-products, which can form in every step and must be removed to continue with the rest of the process.

Sharpless and Meldal have laid the foundation for a method to make this complicated process easier: click chemistry. This novel functional form of chemistry makes it possible to combine molecules in a fashion that largely resembles Lego building blocks, where reactions can be obtained quickly and without unwanted by-products.

It was the first Barry Sharpless, who coined the concept of “click chemistry” around the year 2000. His novel, the minimalistic approach was moulded when he and his team started looking for alternative methods to combine different molecules, instead of using the bonds between carbon atoms. Linked carbon atoms constitute the main frame of all known biomolecules, but these atoms are difficult to persuade when it comes to forming bonds with carbon atoms of another molecule. They need to be artificially activated, a process that often leads to huge amounts of undesired side reactions, unwanted by-products, and a costly loss of material. Sharpless suggested the idea of starting with smaller and simpler molecules with complete carbon frames, and trying to link them by using nitrogen or oxygen atoms, which are easier to control.

Combining such simple chemical building blocks would make it possible to build a virtually limitless variety of molecules, even on industrial scales. However, in order for a chemical reaction to be considered an example of click chemistry, there are certain criteria. One is that the reaction should be able to occur in the presence of oxygen and in water.

A little longer than a year after, he and Morten Meldal independently presented a specific chemical reaction, which is now considered the crown jewel of click chemistry: the copper catalysed azide-alkyne cycloaddition.

Meldal and his team were using different molecules for the purpose of discovering new potential pharmaceutical substances when they observed an unexpected phenomenon in a reaction they routinely conduct. One molecule (an alkyne) in the reaction had decided to visit the wrong end of the other molecule (an azide), and this odd linking created an unexpected molecular structure. Meldal realised that the copper ions had played a role and controlled the reaction, in a way that could be use 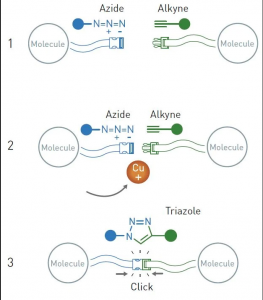 d to link numerous different molecules together. The same year, Sharpless also published a paper about the copper catalysed reaction between azides and alkynes, describing it as an“ideal” click reaction –as it also worked in water. Now, if chemists want to link two different molecules, they can easily introduce an azide in one molecule and an alkyne in the other, thenlink the two molecules together with the help of copper ions.

In the following years, Carolyn Bertozzi carried click chemistry to a new dimension and started utilizing it to map certain biomolecules on the surface of cells. She developed click reactions that work inside living organisms without disrupting the normal cellular chemistry. These are called bioorthogonal reactions, and they are now used in a number of fields, including cancer studies. Many researchers are currently making use of these reactions to work on new ways of diagnosing and treating cancer.

Glycans are complex carbohydrates that can often be found on the surface of proteins and cells. They are important in many biological processes, including the infection of cells or the activation of the immune system. In the early 1990s, Carolyn Bertozzi began the challenging work of mapping a specific type of glycan that attracts immune cells to lymph nodes. While she continued her studies, German scientists managed to convince cells to produce an unnatural variant of a sugar molecule, which was used in the structure of glycans. Bertozzi had the idea of using a similar method to produce her own sugar molecule, with a chemical handle she can track to see where the glycans go in the cell. The chemical handle had to be bioorthogonal – meaning it had to be specific only to the molecule it was linked to, and not react with any other substance, and therefore not interfere with the native biochemical processes occurring in the cell. She first proved in 1997 that her idea really worked and managed to find the optimal handle in 2000: an azide.

Blending her findings with Meldal and Sharpless’ click chemistry, Bertozzi further moved on in the field to create the copper-free version of the duo’s famous reaction (because copper was toxic to biological systems) and demonstrated that it can be used to track her glycans.

Click chemistry and bioorthogonal reactions have started an era of simplicity and functionalism in chemistry, enabling us to artificially produce supremely complex structures -almost any structure we can imagine, which brings great benefit to humankind. Thanks to these methods, it is now possible to enrich substances with others that are antibacterial, can conduct electricity, able to capture sunlight, or protect from ultraviolet radiation –anything you can imagine.

“Clickable antibodies” targeting different types of tumours are also being developed. Once the antibodies attach to the tumour, a second molecule gets injected, which clicks to the antibody. This second molecule could be a radioisotope that can aid in tracking tumours using a PET scanner or that can aim a lethal dose of radiation right at the cancer cells.