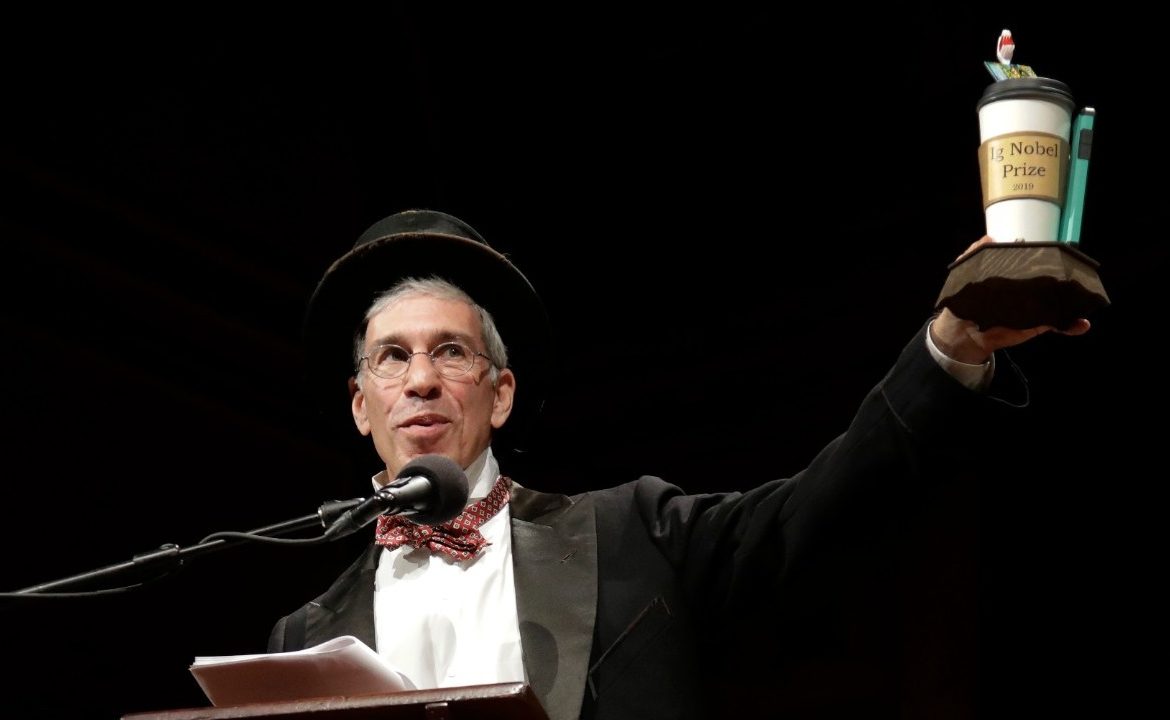 The IgNobel Prizes, given to studies that “first make you laugh, then make you think” in order to promote interest in science by encouraging creative and extraordinary thinking, found their rightful owners once again at Harvard University’s Sanders Theatre Stage in early September.

The theme of this year’s ceremony was “habits” and several demonstrations on this theme took place during the ceremony. There was even a small pre-ceremony youth exhibition titled “15 Habits in 15 Minutes”, where several habits including senseless pacing, loud phone calls, constant phone checking, zoning out, selfies were displayed in a humorous manner as the ceremony’s last-minute preparations took place in the background. In the meantime, the audience settled in their seats and folded their paper planes, which they threw onto the stage with the ceremony’s usual start announcement.

The most emotional moments of the ceremony were certainly the commemoration for Roy Glauber, a renowned physics professor from Harvard and a Nobel Laureate, who humbly swept paper planes at every IgNobel ceremony for almost 20 years, and passed away last winter. His broom, a present from his former students, was handed over to its new owner, another Nobel Laureate, and a close friend of Professor Glauber.

The IgNobel Prizes, organized by the magazine Annals of Improbable Research, are sponsored by the Harvard-Radcliffe Physics Students Society and the Harvard-Radcliffe Science Fiction Association. The award committee receives more than 9,000 applications each year and awards 10 of them. Studies that fail to win a prize are added to the ever-growing pool. This means that a study nominated for the prize keeps being re-evaluated in the following years. The prize committee includes scientists, Nobel and IgNobel laureates, science writers, athletes, and public officials. Traditionally, on the last day of negotiations, a random person passing by is called to the committee to “balance” the decision-making process.

The IgNobel prizes have different designs every year, mostly in accordance with that year’s theme. This year’s prizes were designed in the form of a cardboard coffee cup with a mobile phone, a chewed gum, and a toothbrush attached to it – representing the theme, “habits”. All winners also received certificates signed by several actual Nobel Laureates.

Without further ado, here are the 2019 IgNobel winners…

Medicine: Silvano Gallus, of Italian and Dutch origin, for collecting evidence since 2003 that pizza can protect against diseases and death if it is made and consumed in Italy.

Medical education: US scientists Karen Pryor and Theresa McKeon, for successfully using a simple animal training technique to train surgeons to perform orthopedic surgery. (This technique is based on making a “click” sound with a handheld device when a dog, for example, does something correctly.)

Chemistry: Japanese scientists that estimated the total saliva volume produced per day by a typical five-year-old child, in 1995. (About 500 cc in case you are curious.)

Engineering: İman Farahbakhsh from Iran, for inventing the diaper-changing machine for use on human infants.

Peace: A group of scientists from the UK, Saudı Arabıa, Singapore, and the USA for trying to measure the pleasurability of scratching an itch.

Psychology: German scientist Fritz Strack, for discovering in 1988 that holding a pen in one’s mouth makes one smile, which makes one happier — and for then, in 2017, discovering that it does not. 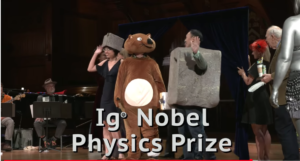 Physics: An international team of scientists for studying how, and why, wombats make cube-shaped poo. (Two researchers from this team, Patricia Yang and David Hu, had also received the 2015 Ig Nobel Physics Prize, for testing the biological principle that nearly all mammals empty their bladders in about 21 seconds +/-13 seconds.)

You can watch this short but fun ceremony, and the interesting demonstrations on the “bad habits” theme on YouTube. More information on the winners of this year and the previous years can be found on the organization’s official website.