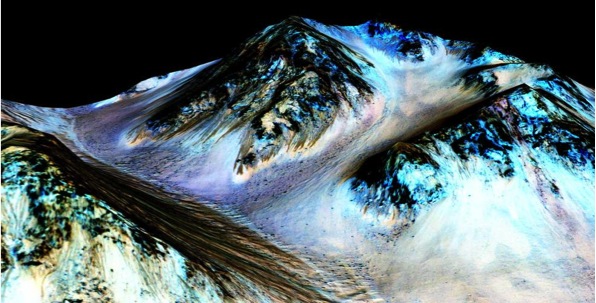 Briny, but water is water…

After keeping the world in suspense for days, NASA announced the presence  of evidence for intermittent flow of liquid water on the surface of  Mars. The discovery, made public on September 28, deals  yet another blow to the long-held assumption that a warm and “wet” planet with large oceans  and rivers billions of years ago, Mars had lost all of its water  – together with much of its atmosphere – to become an arid and frigid world.

Latest data from the Mars Reconnaissance Orbiter (MRO), studying the “Red Planet”  over the past nine years, show that dark lines which episodically appear on cliffs and crater walls and descend downward are seepage from the liquid water containing hydrated salts currently flowing in shallow depths under the surface.

Dark, narrow streaks flowing down the slopes of the Garni crater on Mars, extend several hundred meters. These are thought to be formed by briny water flowing just under the surface.

According to NASA planetary scientists, hydrated minerals identified by spectrometers aboard the MRO are a mixture of magnesium perchlorate, magnesium chlorate and sodium perchlorate. Just as salt spread on roads prevent icing, these hydrated salts are thought to melt the water ice which Mars soil was found earlier to contain in abundance. Researchers point out that some perchlorates prevent water from freezing even at temperatures as low as minus 70°C on Earth.

“…now we know there is liquid water on the surface of this cold, desert planet,” said Michael Meyer, chief scientist for Mars Exploration Program of NASA which is planning a manned mission to Mars in 2030s. “It seems that the more we study Mars, the more we learn how life could be supported and where there are resources to support life in the future.”