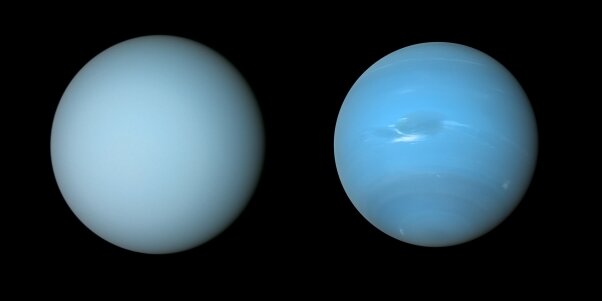 Neptune and its neighbour Uranus are ice giants, unlike the gas giants Jupiter and Saturn.

We may think of Uranus and Neptune as twin planets. While Neptune is only slightly smaller, they are almost the same size. Uranus, however, has slightly less mass than Neptune.

The atmosphere of Uranus predominantly consists of hydrogen and helium, while it also contains ice particles of water, ammonia, and methane. These particles also form the planet’s mantle, which surrounds its rocky central core. Neptune’s atmosphere is also made up of hydrogen and helium mostly. It also has similar ice particles, and like Uranus, its interior is mostly ice and rock. As the interior and mass of both planets are largely made up of ice and rock, they are classified as “ice giants”, as opposed to Jupiter and Saturn.

But if Uranus and Neptune are so similar, why do they have different colours? Why is Neptune bright blue, while Uranus is paler? At visible wavelengths, Neptune is noticeably bluer than Uranus, and astronomers finally have an explanation for what the reason may be.

Recent studies indicate that Uranus has a thicker layer of haze than Neptune, which makes it appear paler. If this layer did not exist in the atmospheres of both planets, they would appear almost equally blue.

The result comes from a model developed by an international team led by Patrick Irwin, Professor of Planetary Physics at Oxford University. The atmospheric model was aimed at describing aerosol layers in the atmospheres of Neptune and Uranus. Previous studies on the upper atmospheres of these planets had focused on the appearance of the atmosphere only at certain wavelengths. The new model, consisting of multiple atmospheric layers, matches observations from both planets simultaneously across a wide range of wavelengths. The new model also includes haze particles in deeper layers that were previously thought to consist only of methane and hydrogen sulfide ices.

The modelling revealed that the middle layer of haze particles just above the methane condensation level is thicker on Uranus, which affects the observed colour of the two planets.

On both planets, methane ice condenses on particles in the middle layer, forming a methane snowfall that pulls the haze particles deeper into the atmosphere. This, in turn, promotes condensation of the hydrogen sulfide ice, creating a separate, deeper layer of cloud/haze.

Neptune has a more active, turbulent atmosphere than Uranus, which suggests that its atmosphere may be more efficient at dispersing gaseous methane into the haze layer, where it can condense on haze particles and produce that snow. This removes most of the haze and keeps the layer thinner in Neptune, making it appear bluer than Uranus. In contrast, the excessive haze on Uranus accumulates in the planet’s more stable atmosphere, giving it a paler hue than Neptune.

The model also helps explain dark spots seen occasionally on Neptune and less frequently on Uranus. Astronomers were not sure which aerosol layer was causing these dark spots or why aerosols in these layers were less reflective. The team’s research shows that the darkening of particles in the deepest layer can produce dark spots very similar to those seen on both planets.