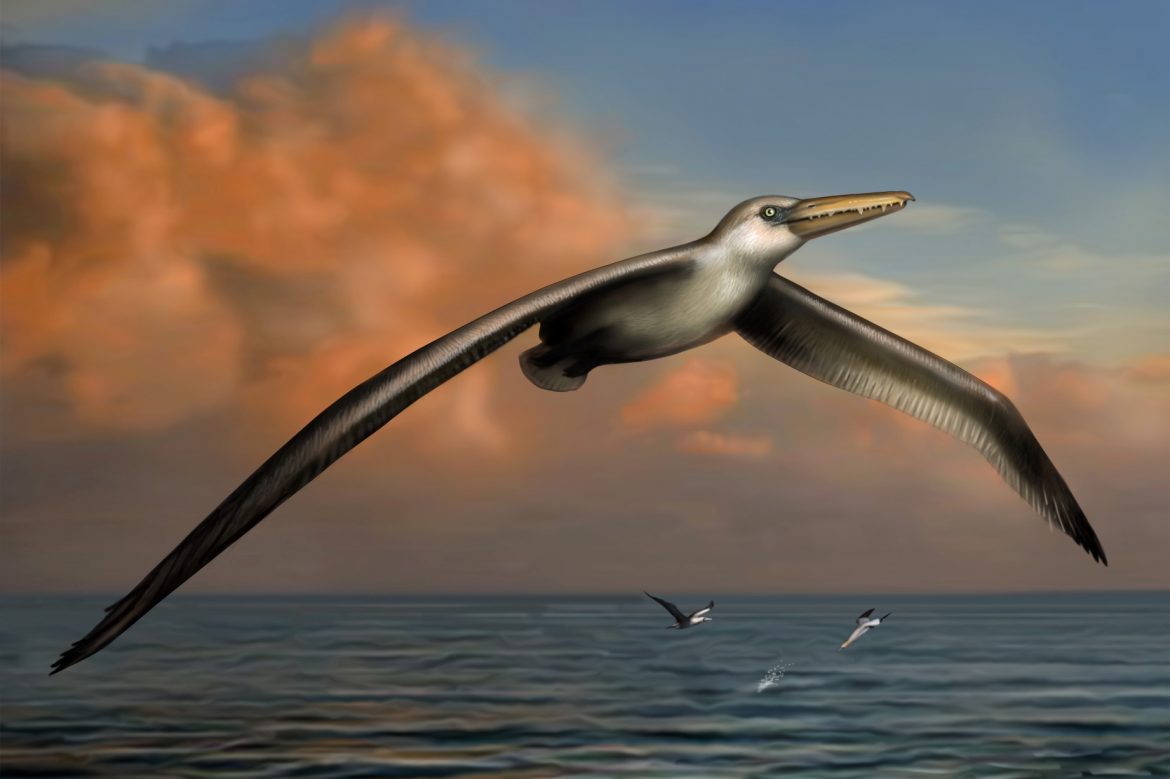 Studying the fossil bones discovered in North Carolina, paleontologists found they belonged to the World’s largest-ever flying bird which lived 25-28 million years ago. The wingspan of the bird, which researchers calculated from the dimensions of the excavated bone parts, extended 7 – 8 m. This puts the prehistoric winged giant at twice the size of royal albatross, the largest species of today’s birds.

Fit sizewise for the title “jumbo jet” used for decades for the wide-bodied airliners, the bird was discovered, also befittingly, during the excavations for a new terminal building at Charleston airport, North Carolina, where  modern-day behemoths land and take off in numbers every day. To clinch the Charleston connection, the bird was named Pelagornis sandersi, after the retired curator Albert Sanders of the city museum.

Because, however, it lacked the powerful engines of its technological imitation, its impressive dimensions must have turned into a liability for P. Sandersi when it came to taking off. Although its paper-thin hollow bones gave it a lightweight skeleton, it would have been practically impossible for it to take to the air from a standstill simply by flapping its wings. Its short legs, meanwhile, would not allow it run fast enough to get off the ground like an airplane accelerating on the runway. Its dimensions was in far excess of the maximum size some mathematical models set for the birds for flight, anyway.

After remaining in the air for over 30 years, it was Dan Ksepka of the National Evolutionary Synthesis Center in Durham who found a way out of the impasse. The researcher fed the available data on P. sandersi  to a computer program which rates the birds’ flight performance subject to such variables as mass, wingspan and shape of the wings.

The results, published in the journal Proceedings of the National Academy of Sciences, show that  P. Sandersi  had to run downhill into the wind or wait for a strong gust to get in the air. But once there, it could fly for miles without even flapping its huge wings and glide on air currents rising from the ocean.

Gigantic wings which require such air currents from vast flat surfaces without exerting too much energy for lift and the beak with tooth-like pointed spikes on upper and lower side leave no doubt that P. Sandersi lived off the ocean. Researchers think the bird would occasionaly swoop down to the ocean surface to grab soft bodied prey such as squid or eels.