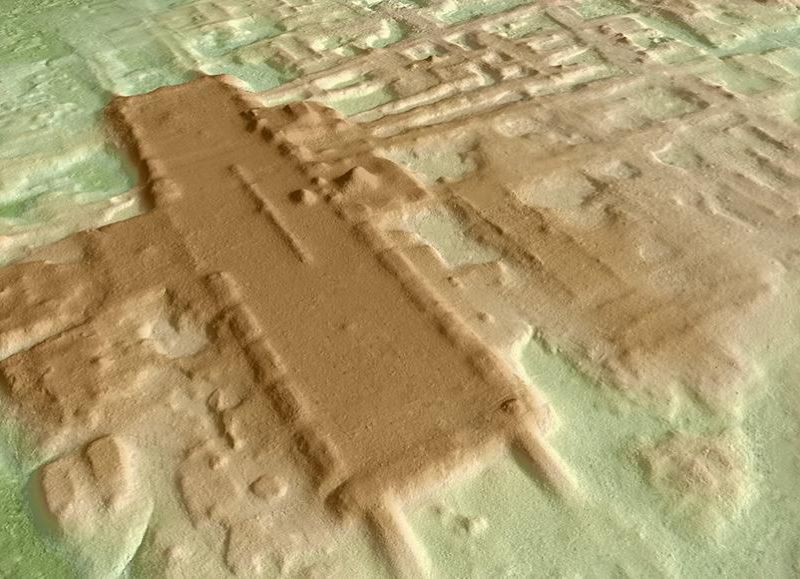 With the advances in technology, methods used by scientists also change constantly and rapidly. Satellite imaging systems have served archaeology substantially in recent years. A technique called LIDAR (Light Detection and Ranging) has made it possible to draw sharp and clear topography maps of heavily forested regions, revealing old structures hidden by the vegetation. By sending thousands of laser beams to the Earth every second, the system analyses the speed and time of returning beams, thus mapping the geographic formations under very dense vegetation. LIDAR was previously used to unearth new structures in the Mayan city of Tikal in Guatemala, and to investigate the settlement plans of ancient Khmer Empire cities in Southeast Asia. This time, the technique helped unveil the oldest monumental structure of the Mayan civilization, which is possibly the largest structure belonging to the pre-Spanish era in the region.

Aguada Fenix, a possible ceremonial ground located in the Tabasco Region of Mexico, was also discovered by using LIDAR. Although this is a residential area, the buildings could not be identified before because they were flat and too big. The research, led by archaeologist Takeshi Inomata from the University of Arizona, revealed a high platform of 1,400×400 metres, a tumulus with about 18 m of height, and various other structures built between 1000 and 800 BC.

The interesting part is, such a large settlement was built without the presence of a central government or the administrative power of a king. The great and ambitious construction works of ancient ages were generally carried out in an economically stable environment, under the rule of a strong king, or the elite, with only a few exceptions. Archaeologists are able to identify this from sculptures, inscriptions, and other personal objects belonging to the ruler and the important people of the region. The Mayan civilization was thought to be no exception, until now. However, no such evidence was encountered in Aguada Fenix, suggesting that the people came together without the presence of a specific authority and built a ceremonial area solely according to their needs. This is the first example encountered.

The ceremonial platform with a height of 10-15 metres and nine ceremonial paths connected to it, all made of clay and earth, were probably used for important astronomical events and by cortege members on other special occasions. Aguada Fenix ​​natives, known to have grown maize 3,000 years ago, possibly began to settle down during this period, leaving the hunter-gatherer lifestyle.

The building complex, which is thought to be completed by 5,000 people in six years, took 200 years to build but was abandoned 50 years after its completion (800 BC). Even after being abandoned, it was probably used for various ceremonial purposes. Although a range of ceramics, bone and shell objects and ceremonial items made of jade were found, there were no findings pointing to the existence of a ruling class. Therefore, this enormous area was almost definitely a free-for-all ceremonial space, built with great collective effort. It also brings a breath of fresh air to the world of archaeology as evidence contradicting the traditional view that the Mayan civilization gradually grew with the merging of small villages during 1000-350 BC.