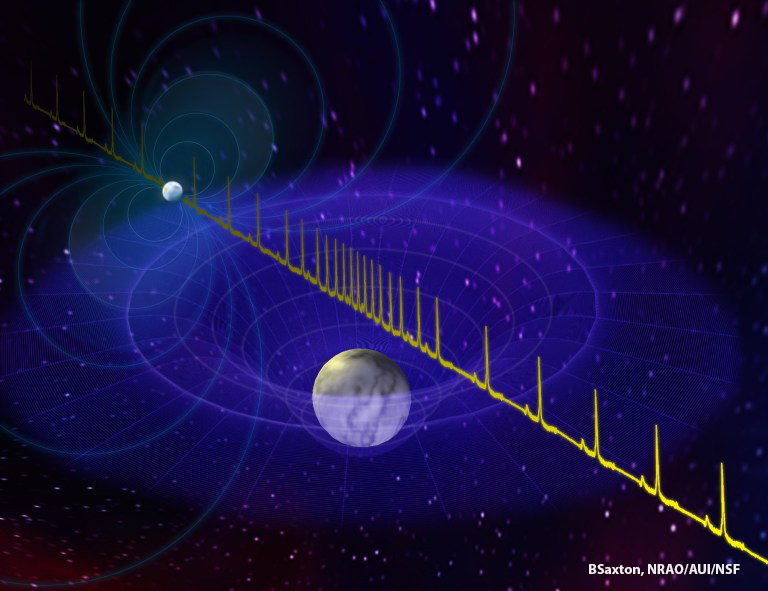 The Most Massive Neutron Star Discovered

Neutron stars represent the end of the evolutionary life processes of massive stars. They form when giant stars die with bright supernovae bursts, with their nuclei collapsing under gravitational forces, where protons and electrons melt into each other to form neutrons. If this nucleus has a certain mass, it transforms into a neutron star under gravitational pressure. If this mass is above a certain level, it cannot resist the size of the gravity and becomes a black hole. However, researchers are not yet completely sure of the line of separation between the two.

This neutron star, called J0740 + 6620, is a fast-rotating pulsar with a diameter of only 20-30 kilometres, with a mass 2.17 times the Sun (which is 333,000 times the mass of the Earth). This size is regarded close to the upper limit of the mass and density that an object can have without collapsing itself into a black hole.

Some neutron stars, called pulsars, emit radio waves from their magnetic poles and they spin at a constant speed. Since the pulsar’s spin with this extraordinary speed and regularity, astronomers can use them as the cosmic equivalent of atomic clocks. This is also the reason why astronomers called them “cosmic lighthouses”. Some spin hundreds of times per second. This precise timekeeping helps astronomers to study the structure of space-time, to estimate the masses of stellar objects, and to develop their understanding of general relativity.

Astronomers are interested in neutron stars for various reasons. Although most of these high-density stars have a diameter of around 25 kilometres, only a single sugar-cube size of their material weighs 100 million tonnes on Earth -nearly the sum of the weight of all people on the planet.

Observatories of Green Bank and Arecibo have been cataloging pulsars for more than a decade. When scientists at these observatories examined the pulsar J0740 + 6620 that is 4,600 light years away from the Earth, they found out that it forms a binary system with the cooled core of a smaller dead star, a white dwarf. The rotation of these two objects around their common centre of mass helped the scientists to estimate their masses. When the white dwarf passes in front of the pulsar, it changes the pulsar’s motion in space and delays its fine timing. The researchers were able to measure this delay, and determine the mass of the pulsar using a method called the “Shapiro delay”.

“The orientation of this binary star system created a fantastic cosmic laboratory,” said Scott Ransom, an astronomer at NRAO and co-author on the paper. “Neutron stars have this tipping point where their interior densities get so extreme that the force of gravity overwhelms even the ability of neutrons to resist further collapse. Each “most massive” neutron star we find brings us closer to identifying that tipping point and helping us to understand the physics of matter at these mind-boggling densities.”

The findings may also help astrophysicists answer some other big questions about neutron stars. For example, researchers are not sure what is going on inside these super-cosmic objects, whether the neutrons in them flow freely like a liquid or stand in their place. It also seems possible that intense gravity can crush the neutrons into a soup of quarks and other exotic particles.