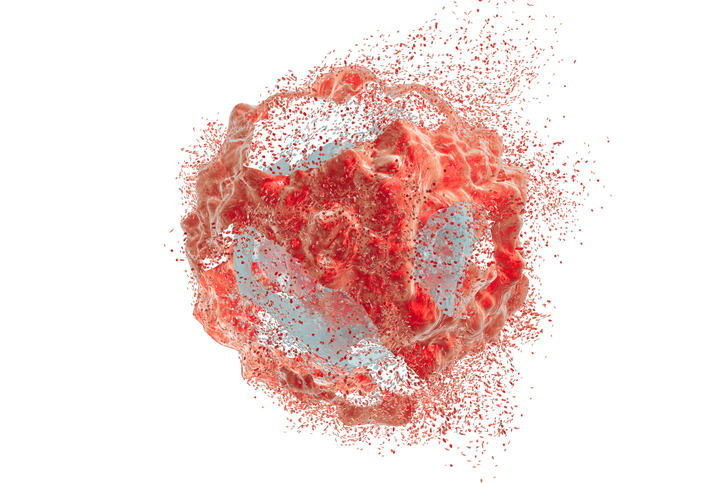 A group of scientists from Stanford University calculated how fast death strikes cells. The researchers discovered that the signals triggering apoptosis, known as the programmed cell death, move through the cell like a wave and much slower than previously thought: only 30 micrometres or 0.03 millimetres per minute.

This is the first time these “trigger waves” are used to measure the speed of death. They are normally responsible for intercellular communication. According to the scientists, cell death resembles toppling dominoes. A molecule inducing cell death keeps activating another until the cell shuts down entirely.

In case you are unfamiliar with the term, apoptosis is a self-destruction process in the cells that help the body get rid of old, unneeded, and unhealthy cells without damaging the surrounding tissues. It is also called the “programmed cell death” and sometimes called “cellular suicide”. Yet, the mystery of the entire process remains because it does not always stop the development of cancer or neurodegenerative diseases. It had also been unclear how it spread through the cell once triggered.

To figure this out, senior author Dr James Ferrell and his team used the egg cells of African clawed frogs to observe the process. They filled test tubes with fluid from the eggs and triggered apoptosis, which they tracked by tagging involved proteins with fluorescent light.

Researchers witnessed that death was carried on by trigger waves, which spread faster than chemical diffusion (the spreading of substances from high concentration to low concentration). In African clawed frog eggs, a trigger wave takes about 30 minutes to spread across the cell, whereas diffusion takes five hours. This stable speed shows that the death of a neuron 100 micrometres across can take 3 minutes and 20 seconds.

So far, apoptosis is the only form of cell death in which trigger waves have been identified, but Ferrell and his team hope to find out where else in biology trigger waves might be playing a role. “We show that long-range communication can be accomplished by trigger waves, which depend on things like positive feedback loops, thresholds and spatial coupling mechanisms. These ingredients are present all over the place in biological regulation. Now we want to know where else trigger waves are found,” he says.

Discovering that apoptosis travels as trigger waves in cells may give scientists clues about how to persuade cancer cells to kill themselves or how to prevent cells from dying in conditions such as Alzheimer’s disease or muscular dystrophy.