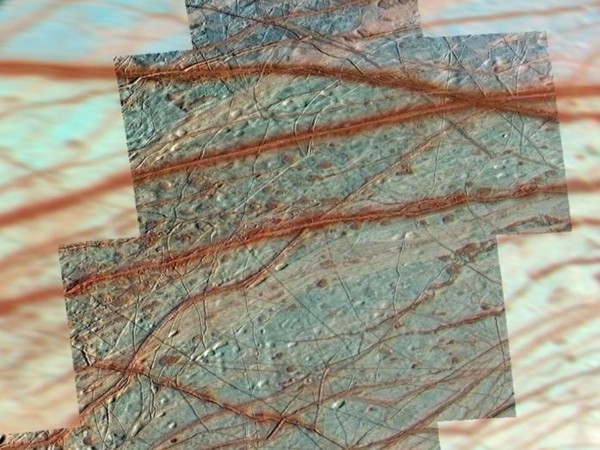 Besides its icy surface crisscrossed with innumerable crack lines, Europa, one of the four biggest moons of Jupiter, intrigued planetologists for decades also because of a global ocean amenable to life believed covering it under its ice crust. A new study has now added to the list of surprises, showing that the moon was renewing its crust with active plate tectonics, an icy version of the one operating on Earth.

The process is important since the subducting parts of outer crust could possibly deliver chemical nutrients to the subsurface ocean that may trigger the emergence of life.

Europa, evokes interest not only with its crack-lined surface, but with other features too. Its icy surface is granit-hard due to the moon’s average temperature of -170 ⁰C. Underlying this thin and brittle shell of ice, is a thicker, warmer and relatively viscous layer of convecting ice thought to extend from a few to tens of kilometers deep. Further down, it is believed  that a 100-kilometer deep, tidally-heated global ocean exists.

A feature of Europa which planetologists struggled to explain has been the young  age (40-90 million years) of  the surface (30 million square kilometers, or a sixth that of the Earth) of the moon which was formed several billion years ago. That makes it one of the youngest surfaces in the Solar System.

Researchers have been speculating that warmer, convecting ice was rising to the surface through the cracks traversing the thin, hard and brittle crust, spreading in both sides to create new surface much like the spreading of hot magma from the mid-ocean ridges on Earth.

For this to be the case, however, the surface area had to increase or the moon had to contract, with observations showing neither was true. The only remaining explanation was a fragmented outer shell with plates subducting under each other, carrying down old surface, equal in area to that of the newly created.

But data corroborating this tectonic activity had eluded scientists until now.

A new study by Simon Kattenhorn of the School of Earth Sciences of the University of Idaho and Louise Prockter from the Johns Hopkins University’s Applied Sciences Laboratory,  based on images taken by the Galileo spacecraft, has shown that the process at work conforms to reason on Europa, too: Like the mechanism operating on Earth, as the new surface coming from deep inside expands, older surface subducts under the crust.

Attesting to this are long strips with amorphed features called subsumption bands, at the edges of which surface structures like cracks or plates end or rotate in chaotic fashion, as well as measurements showing that parts of the old crust had vanished. Subsuming bands usually are 30 km wide and can be as long as 1700 km.

In the latest episode, a 92-km-wide strip of surface had subducted into the inner crust of soft ice along a 300-km-long, 23-km-wide subsuming band, researchers determined.

On Earth, along the subduction zones with a total length of 55.000 km, oceanic plates have dived under continental plates at an annual rate of 20-80 mm over the past 200 million years. According to researchers, if the outer ice shell dove into the inner layer along the subduction zones totaling 30.000 km at the same rate, it explains the moon’s young surface age of 40 to 90 million years.

Researchers underline the importance of the transport of chemical nutrients diretly to the global liquid ocean or pockets of water within the softer ice crust through tectonic activity  for astrobiology and habitability of the moon.