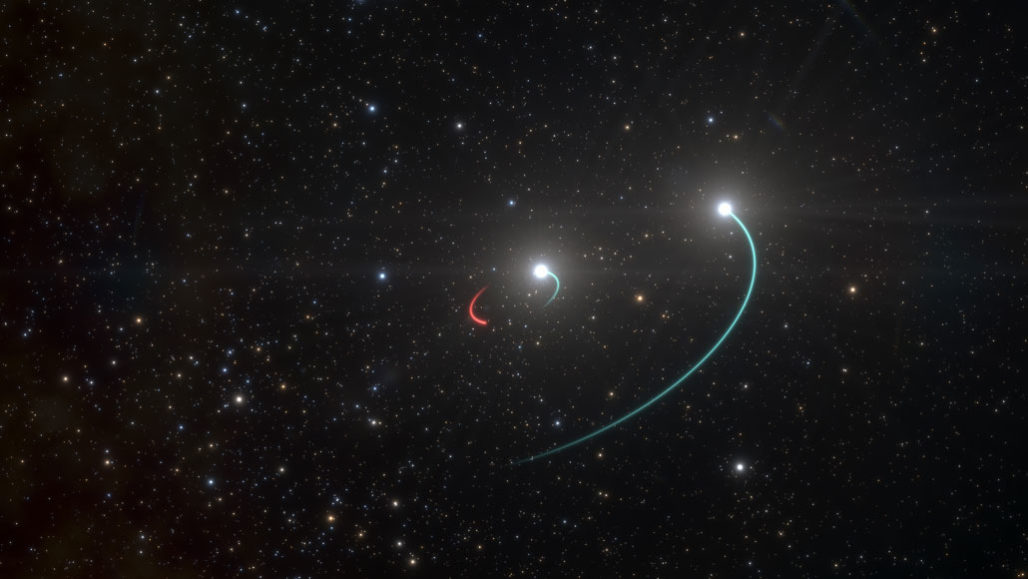 By using the La Silla observatory in Chile, a team of astronomers led by the European Southern Observatory (ESO) found a black hole thought to be closest to the Solar System! The newly discovered black hole is 1,011 light years away from us, in a triple star system that is a part of the constellation Telescopium, and is at least 4.2 times as massive as the Sun.

Researchers say our new neighbour black hole, dubbed HR 6819, does not actively consume the stars and dust around it, and is therefore invisible. Black holes are invisible to the naked eye, they do not have locally detectable features, and even light cannot escape them. Unlike other black holes we have observed until now, HR 6819 is the first to have a stellar mass without being in a violent relationship with its surrounding.

Astronomers who discovered HR 6819 were not actually looking for a black hole. Instead, they just wanted to learn more about a pair of strange massive stars spinning around each other.

The movements of these two stars suggested the presence of another object in orbit with them, weighing at least four solar masses, but unseen. The celestial body to fit those measurements was a black hole.

On a human scale, a thousand light years is a tremendous distance. If a model of the Milky Way could be scaled so that the distance between the Earth and the Sun was represented by the thickness of a single hair strand, HR 6819 would be about 6.4 kilometres away from us. However, considering our galaxy is larger than 100,000 light years, HR 6819 is pretty close. In fact, the system is close enough to be seen without the aid of binoculars or telescopes on a clear night in the southern hemisphere. The fact that the newly discovered black hole is this close and not very special, shows that the Milky Way is filled with black holes.[/vc_column_text][/vc_column][/vc_row]