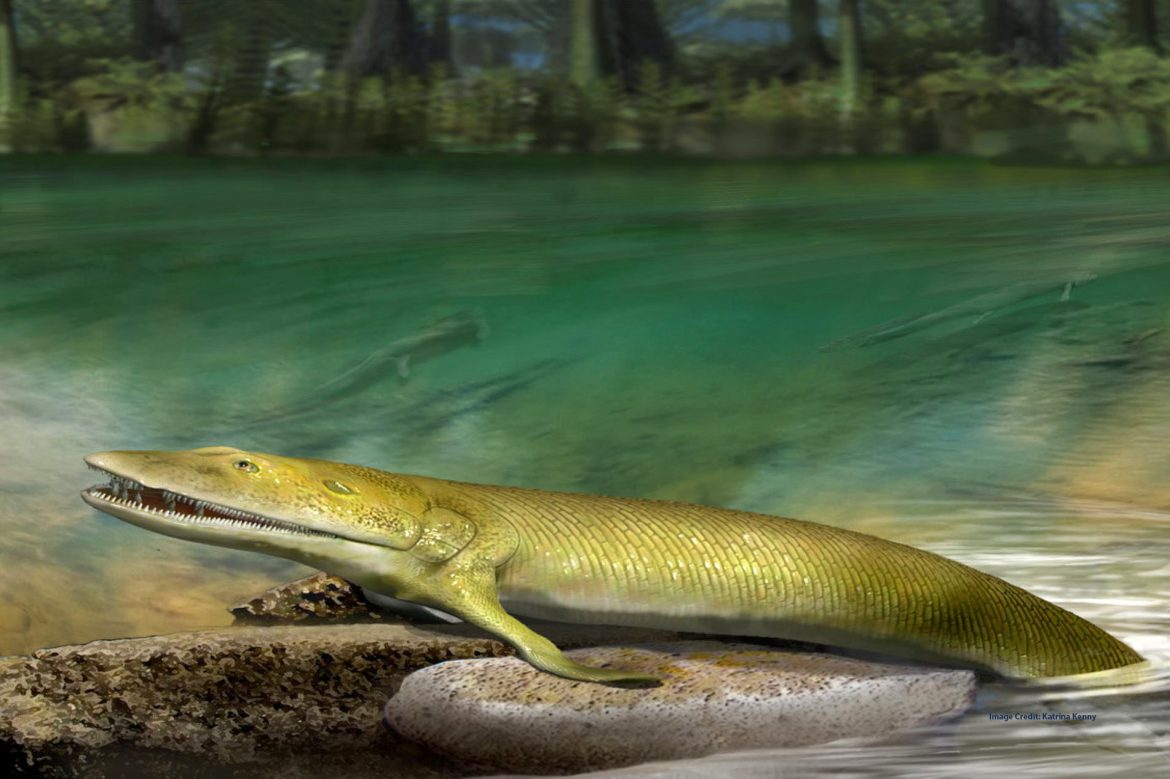 From Fins to Hands

A fish fossil discovered by scientists in the Miguasha National Park (Canada) sheds light on an important detail about the evolutionary story of life in its transition from aquatic to terrestrial environments. This fish, dubbed Elpistostege watsoni, was thought to have lived at the end of the Devonian Age (approximately 380 million years ago). This 1.57 m long fish provides an insight on how the limbs of tetrapods evolved during life’s journey from the waters to the land, and it hints that this part of the evolution may have started just before the fish actually left the water.

Fish to tetrapod transition is one of the most important events in the evolutionary process, and the exact manner of how this transition occurred still bears a good number of question marks. Studying the evolution from fish fins to actual hands and feet, palaeontologists focus on lobe-finned fish and tetrapods (four-legged vertebrate animals) from the Middle and Late Devonian Age (393-359 million years ago). While the most famous of these is a fish named Tiktaalik, which was previously discovered in the polar region of Canada, a well-preserved whole specimen of this species is yet to be found.

The striking thing about this new fossil is that it displays the complete pectoral fin of an Elpistostegen for the first time. Thanks to tomography scans, scientists were able to detect several bones including humerus (arm), radius and ulna (forearm), carpus (wrist), and finger bones in rows. Professor John Long of Flinders University’s Department of Palaeontology says “This is the first time that we have unequivocally discovered fingers locked in a fin with fin-rays in any known fish. The articulating digits in the fin are like the finger bones found in the hands of most animals.”

These finger bones allowed the fish to support themselves in shallow water, and while on land for occasional short trips. Numerous small bones balance the distribution of weight to fins, giving the fish flexibility of movement. Although this fossil is so far the best specimen we have that represents the fish-to-tetrapod transition, it does not mean that Elpistostege is our ancestor. It only shows us that the digits of vertebrates began evolving much earlier than we thought before the fish made it to the land.

Various genetic studies also revealed that the gene clusters known as HoxA and HoxD, which are known to be necessary for fin and limb development, are found in both fish and land animals. In other words, it is also genetically known that fins and hands have gone through the same evolutionary process.

Elpistostege, as far as we know, is also the largest shallow-water hunter of its own period. Thanks to its large and pointed teeth, it probably fed on other (extinct) fish species, whose fossils were also discovered inside the same sediments.