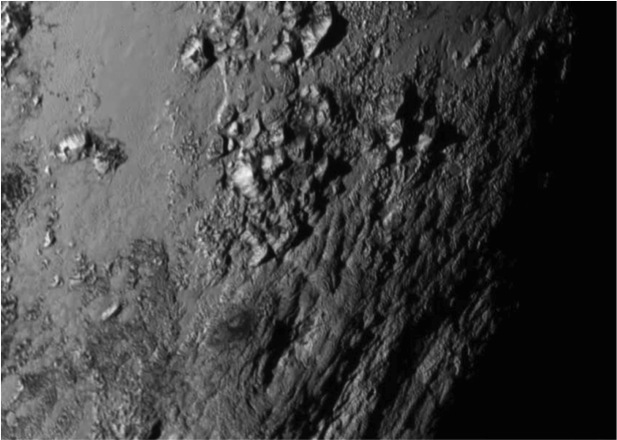 Among the first close-ups sent bythe spacecraft is one showing ranges of icy mountains on a rugged terrain on the equatorial belt at the base of a light colored heert-shaped  region. Some of the peaks  tower to 3500 meters . Scientists on the New Horizons team estimate  the ages of the mountains to be not more than 100 million years, making them among the youngest in the 4.56 biliion-year-old Solar System.

Their youth indicates that the area they are located, which corresponds to 1 percent of Pluto’s total surface area, could be geologically active.  Since Pluto’s interior cannot be heated by gravitational interactions with a much larger object as is the case for many moons of Solar System’s gas giants, planetary scientists say   the data – which will trickle in over the next 16 months – may necessitate a complete overhaul of models for geological processes in icy worlds.

The reply of Charon, the biggest moon of Pluto, to the mountains of  its companion is a smooth, young surface relatively devoid of craters  and a system  of cliffs and cracks  traversing the hemisphere whiich faced New Horizons as it made its pass.

These features , indicating a fractured crust and resurfacing  also appear to be the work of  recent geological processes. Another feature capturing attention is a deep scar on its limb, which the New Horizons specialists identified as a canyon seven-to-nine kilometers deep. The large dark stain on the north pole was found to be a shallow layer of a yet-unidentified material which was deposited on the surface.

Climaxing a 9.5-year, 5 billion km journey to Pluto, the successful flyby wraped up the 50-year-long first phase  of the exploration of the Solar System.  New Horizons then headed deeper into the Kuiper Belt, the disk shaped structure  girdling  the planets from outside the orbit of Neptune and harboring the icy and rocky debris from the formation of the Solar System.

After the flyby, the jubilant spokesmen for the mission noted with pride that New  Horizons had reached its target just one minute before the time fixed for the rendezvous nearly ten years ago. They also said the craft had “threaded the needle” at a 60-to-90 km window, which, they noted was equivalent to an airliner straying from its destination only with the width of a tennis ball.

A photo the spacecraft had taken from 768.000 kilometers before it  shut off for the flyby, shows that a large portion of the large,  light-colored, heart-shaped region is very smooth, causing planetary scientists to believe that it could indicate an ongoing geological process.

In the final stretch of the approach, New Horizons added another notch to its already-spectacular  list of successes on the run-up, re-sizing the dwarf planet for good: Pluto is bigger than so far believed.  Due to the tricky behavior of the atmosphere shrouding it – raining  onto the surface and lifting dependent on its distance from the sun on its highly eccentric orbit – a firm value could not be established as to its size from observations by ground and space –based telescopes over decades.

Artist’s conception comparing the sizes of Pluto and its companion Charon with that of the Earth.

With its suite of state-of-the art cameras  and sensors, the spacecraft established  Pluto’s precise size from almost point-blank range. It’s diameter is 2370 kilometers, or 18.5% of that of the  Earth.   The  the new hole added to its belt comes as a confirmation that although it was demoted to dwarf-planet status through a controversial ruling by the International Astronomical Union in 2006, it is still the biggest  Solar System object beyond the orbit of Neptune.

As it lacks a substantial atmosphere, the size of Charon, the largest of  Plutos’ five known moons, could be accurately determined from the Earth and by observations with the Hubble Space Telescope. New Horizons confirmed the value. Charon is about half of Pluto in size, with a diameter of 1208 km, or 9.5% of that of the Earth.

The spacecraft also sized the comparatively larger two of Pluto’s four smaller moons,  giving Nix 35-km, and Hydra 45-km diameters respectively. Their bright appearance may be due to ice covering their surfaces, NASA experts speculate. Being darker and still seen as specks, no precise sizes could be given for the other two moons, Styx and Kerberos so far.

Larger size for Pluto translates into a slightly lesser density than it was credited with before, as well as a higher ratio of ice in its composition.

In the final stages of its approach, New Horizons had revealed other surprises from  Pluto, some being differently colored regions and strange features on its surface. The planetary scientists  remain at a loss to solve the mystery of four evenly-spaced and nearly identical (480-km wide) dark splotches lined along its equatorial belt. These, unfortunately, were on the opposite hemisphere during the flyby, precluding their observation from a mere 12.500 kilometers above the surface. These dark spots, though, look like the extension of the “tail” of an elongated dark shape along the equator, aptly named “the whale”. New Horizons has also brought into (ever-sharper) view  a large and rimmed crater and an enigmatic, polygonal structure.

Planetary scientists explain the uneven coloring of Pluto with the distribution of nitrogen, methane, carbon-monoxide and water ices on its surface. The predominant tan color is thought to be given by methane ices. The brightest regions are explained with overbearance of nitrogen while darkest regions are attributed to tholins,  substances which form when methane reacts with UV radiation from the sun or cosmic rays.

Another interesting finding from the New Horizons mission is the difference between overall coloring of Pluto and its satellite/companion Charon, which the planetary sciences attriibute to the latter’s smaller size. Although it apparently was able to hold on to its water ice despite its lower mass,  more volatile chemicals like methane should have diffused into space.