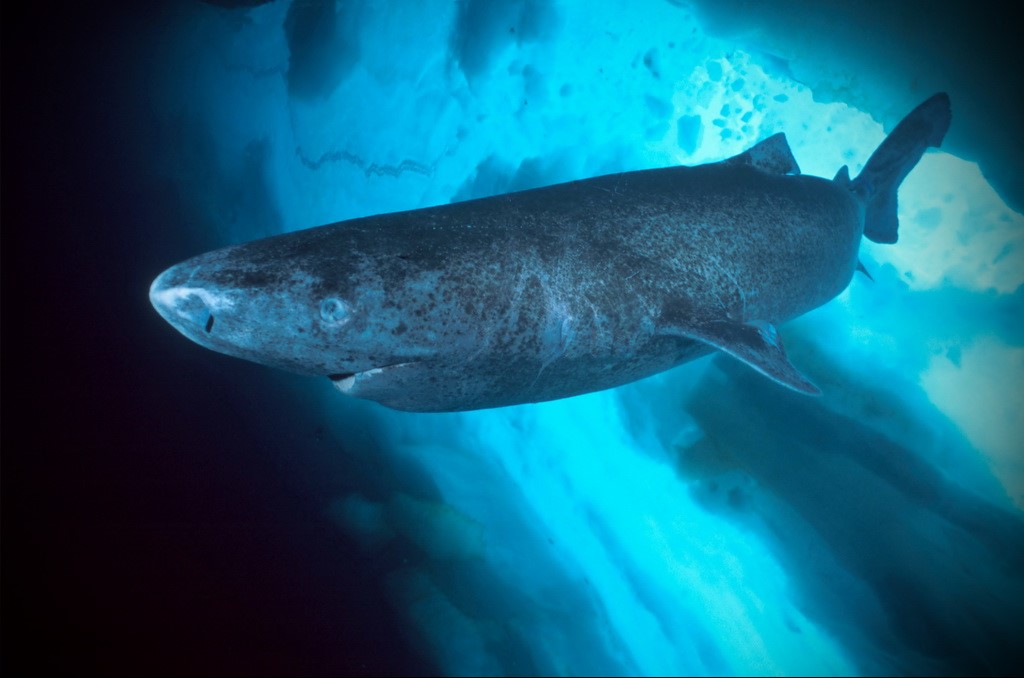 Danish scientists have established that the longevity record among the vertebrates belongs to the Greenland shark (Somniosus microcephalus) living in  frigid waters of the Arctic Ocean with adult body sizes reaching 4-5  meters.

Carbon dating 28 females ensnared in trawling nets, researchers found that the largest two, measuring 493 and 502 centimeters were 335 and 392 years respectively.

Previous work had shown that females of the species, which measure 42 cm at birth and grow just 1 cm every year, reach fertility only after their lengths exceed 4 m. This means that they become ready for mating  not before the age of 156

Among the interesting findings concerning the Greenland sharks is the bliindness of most individuals due to a parasitic worm attaching to their eyes and feeding on the corneas, leaving their hosts to rely on their keen sense of smell  to find whale carcasses or surprise arctic seals which give up the comfort of floating ice and sleep in the water to avoid predation by polar bears. They also suck in smaller prey from a meter away.

Researchers from Copenhagen and Aarhus Universities first tried to determine the ages of the sharks from (calcified) growth rings on their  spinal columns. Finding none, they then resorted to an imaginative method, deriving their ages accurately from the ratios of carbon isotopes in the eye lenses.

What the scientists looked for was carbon-14, a heavier isotope of the element with a precise decay rate. The spate of nuclear tests in mid-1950s caused a marked increase of the isotope in ocean waters and hence in  the tissues of marine animals by early 1960s.

Carbon-14 tests applied to the sharks showed that two sharks measuring shorter than 2.2 meters were born after 1960s while one’s  birth year was pinpointed to 1963. The correlation between the bodysizes and  ages allowed the accurate calculation of the specimens’ ages.

Marine biologists and geneticists think the cold waters of the Arctic slow the metabolism, and thereby the growth and biochemical activities of  the animals resulting in longer lifespans. Furthermore, a study published three years ago concluded that by activating the anti-aging genes, cold enabled better folding of proteins, purging of DNA-harming molecules and a more effective fight against infections, which together contribute to the lengthening of lifespans.