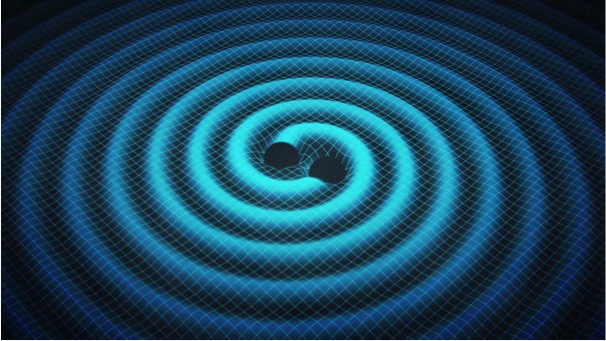 We All Were (temporarily) Deformed!..

Breaking the tensely awaited news following circulating rumors, physicists in the U.S. announced the first ever discovery of  gravitational waves predicted by Einstein’s general relativity, sending ripples of their own across the scientific world.

The waves which were emitted during the merger of two black holes 1.3 billion years ago, were captured by two huge detectors working in unison for years to catch such waves released in catacylictic events in the universe.

The detectors, one at Hanford, Washington and the other in Livingston, Louisiana together make up the Laser Interferometer Gravitational-Wave Observatory – LIGO.

In the event dubbed GW 150914, the gravitational waves emitted during the final seconds of merger between the two stellar-mass black holes, packing 36 and 29 solar masses respectively spiraling into each other, stretched and compressed the space by one billion trillionths (10-21) of a nanometer, and when it passed through the Earth five months ago, did the same by a hundred thousandths of a nanometer, which roughly corresponds to the size of the nucleus of an atom.

According to LIGO physicists, the merger produced a single, spinning black hole with a mass 62 times that of the sun. The remaining 3 solar masses from the original masses of black holes spread in every direction in the form of gravitational waves.

In computer simulations of black hole mergers, powerful gravitational waves which start to be emitted seconds before the merger as the two black holes spiral towards each other, take the form of a “chirp” with rising amplitude and frequency which hits the peak in the merger. The new blackhole produced by the merger at first looks highly deformed, but in tiny fractions of a second it regains for, ringing like a bell in the process and emitting new gravitational waves. As the system rapidly loses energy, ringing comes to an as a characteristic signal called “ringdown”.  The gravitational waves emitted in this process lasting less than a second provide information about the mass and spin of the new (merged) black hole.

In the GW150914 event, the gravitational waves which began to be emitted when the distance between the “inspiraling” black holes was reduced to 210 kilometers, reportedly followed this course elucidateed in the model.

You can listen to the” chirp” and “ringdown” which the LIGO scientists modeled as sound waves based on gravitational wave frequencies expected at LIGO at the following link:

Waves come with a bonus

The confirmation of gravitational waves predicted by Einstein, also served to prove veracity of another prediction of his theory.

The arrival of the gravitational wave signal at twin detectors of LIGO (or, more properly “aLIGO” which refers to “advanced” or enhanced versions) with a time difference of 0.007 seconds (or 7 milliseconds) indisputably showed that signal was traveling at light speed. Thus, it was proven that gravity travels with the speed of light in conformity with Einstein’s prediction and its particle, graviton, is massless.

How was it detected?

In each of the LIGO detectors at Hanford and Livingston, laser beams go back and forth in two 4-km-long tunnels joined at one end at right angle in a L shape. A 40 kg mirror of pure silicon called “rest mass” is suspended at both ends of each tunnel.

In the detectors, a laser beam of 1064 nanometer wavelength with 200 W power is sent to a beamsplitter which lets half of the light to one tunnel and reflects the other half to the other. Before returning to the beamsplitter, laser beams are reflected back and forth 400 times between the mirrors tunnel ends, so, in effect, travel close to 1600 kilometers.

After the reflections, light beams in two arms of the detector are united at the beamsplitter, which diverts part of the light to a photodetector. If the two beams have traveled exactly the same distance in the two tunnels, reunited beams cancel each other in a phenomenon called “destructive interference” and no light is seen at the photodetector.

But if during its passage the gravitational wave has slightly compressed one of the tunnels and compressed the other, the beams cannot cancel out and they display an interference pattern at the photodetector.

When the passing wave affects the frequencies of the laser beams, the interference at their intersection measured with a precision ten thousandth of a proton yields data about the amplitude and the source of the wave.

Announcing the detection at a press conference, LIGO scientists said the automated systems of the detector recorded the arrival of the wave with a frequency of 35 Hz, which reached 235 Hz in just 0.25 seconds before exiting the system. The wave reached e second observatory at Livingston in 0.007 seconds, confirming light speed for gravity.

The dual confirmation of Einstein’s predictions 100 years after the publication of his general theory of relativity, is widely expected to bring the coveted Nobel Prize.