Skip to content
Homepage Biology Good News for The Farsighted! Displays With “specs” on Their Way 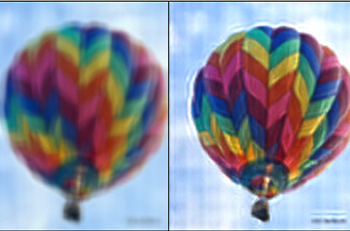 Good News for The Farsighted! Displays With “specs” on Their Way

That’s what I’ll call creativity! Let my smartphone, my tablet, my laptop wear them instead of me.

They say need drives inventions; right? So, one of the researchers at the University of California – Berkeley “on his way out from middle ages” must have forgotten his spectacles at home. Those to whom it happened would shudder at the memory:  You are about to deliver a lecture or make a presentation. But, try and see if you can the text you had so meticulously prepared. Or the pictures, tables, graphics etc. you had put on the Powerpoint. You can forget about the small script or captions. Consider yourself lucky if you can make out the pictures themselves.

Thankfully, however, researchers seem to have covered considerable distance at developing computer algorithms and vision-correcting displays to compensate for the distorting effects vision impairments. These technologies promise relief to hundreds of millions of people who cannot see text or images on their smartphones, tablets or computers with adequate sharpness without having to wear reading glasses or contact lenses. And consider those whose jobs rivet them to seats in front of computer screens but who cannot even wear contact lenses due to abnormally shaped corneas.

Brian Barsky, a professor of computer science, display technologies and optometry  at UC Berkeley, took on himself to go to the aid of such people.

Berkeley researchers joined forces with Gordon Wetzstein ve Ramesh Raskar of the Massachusetts Institute of Technology and developed a prototype vision-correcting display. The set-up is composed of a thin sheet punctured by microscopic “pinholes” squeezed between two transparent layers of plastic placed on the display of an iPod. The holes are 75 nanometers accross and spaced 390 nanometers.

"The significance of this project is that, instead of relying on optics to correct your vision, we use computation," says Fu-Chung Huang, a member of the team which will unveil the “computed  light field display” at the International Conference and Exhibition on Computer Graphics and Interactive Techniques (SIGGGRAPH) at Vancouver, Canada on August 12.

The algorithm, developed at UC Berkeley adjusts the intensity of each direction of light from every pixel in a way tuned to the user’s visual impairment. A process called “deconvolution” makes the light from the image on the display pass through the pinhole array in a way that the user perceives a sharp image.

Barsky notes that the technique distorts the image in a way that the viewer ( whose visual parameters fed to the program) will see a sharp image on the screen. Another person with different eyesight, however, will perceive it as a blurred image.

In the experiment, researchers put an image which appears blurred to a digital reflex camera (left one of the hot air balloons in the top image)  simulating the vision of a farsighted person. But when the pinhole array was placed on the screen, the image seen through the lens of the same camera appeared sharper.

Expounding on future applications, Huang says the prototype could be made into a thin screensaver which, combined with improved eye-tracking technology, can adapt the images to the position of the head.  He also foresees multi-way vision correcting displays on which images would look sharp to different people with different visiual impairments.