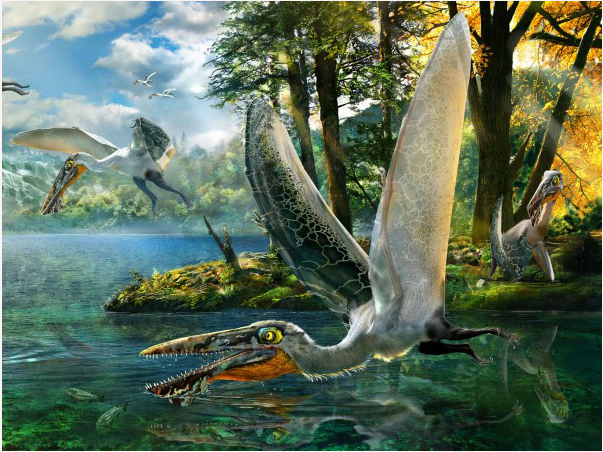 Flying Dynosaur Knew How to Fish

Focusing on two outstanding features of two flying dynosaur fossils unearthed  from sediments in northeastern China dated to 120 million years ago, an international team of paleontologists concluded that these specimens from a species belonging to a group of carnivorous flying dynosaurs named pterosaurus, were evolved to catch fish by swooping to skim water like some modern day birds do.

These features are a keel like deep crest protruding from below the lower jaw and a hook like extension at the rear end of the structure, lacking in other pterosaurus species. The hook is believed to be an anchor for a soft tissue throat pouch like those distinguishing present-day pelicans.

Another prominent feature of the fossil skeletons,  found longitudinally crushed with wings folded over the heads, was an exceptionally low and elongated skull. Two rows of teeth or tooth cavities, with 21 on each, lined the upper jaw, and rows of 19 were counted for the mandible.  The crest under the mandible was possibly made of keratin like the beaks of modern birds, and was probably covered with skin, the researchers speculate. The wingspan of the discovered specimens were estimated to be about 1.5 meter.  The species, named Ikrandraco  avatar, was believed to have lived around large freshwater lakes and fed on small fish. The name was apparently inspired by the flying reptiles that native inhabitants of the secluded moon used for transport in James Cameron’s  famous film, “Avatar”. Draco means dragon in Latin while the flying dragons in the movie were called Ikran.

Spotting the prey swimming close to the surface from high above, I. Avatar, probably swooped down to skim the surface  with its mandible dipped in water.

The  throat pouch  is believed to have served as a storage tank to hold the fish snared during the scooping run to be swallowed after the water which filled in was emptied.

The crest anchored to the underside of the mandible was probably used to break the surface tension of the water and facilitate the scooping action.