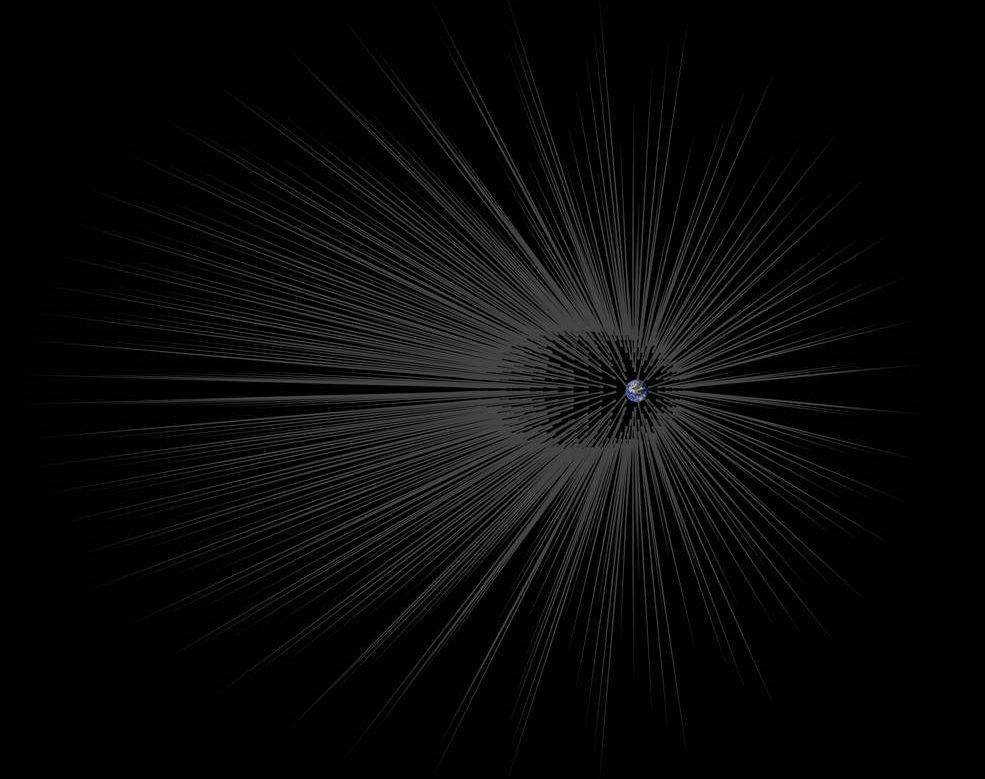 When dark matter particles traverse it…

The Earth and other planets of the Solar System could be surrounded by hair-like filaments made up of dark matter according to a NASA researcher.

Whereas the dark matter makes up 27 percent  of  the total matter and energy budget of the universe, ordinary matter, of which all the stars, galaxies, planets and giant intergalactic gas and dust clouds are formed account for a mere 5 percent of the total. The remaining 68 percent of the energy density of the universe (matter is also a form of energy according to Einstein’s famous equation E=mc2) is made up of a similarly mysterious “dark energy” which exerts a repulsive influence on matter in contrast with gravity.

Because it does not emit light and rarely interacts with ordinary matter, dark matter cannot be seen and its existence is inferred from its gravitational pull.  The standard model of cosmology says dark matter is distributed in the universe as a cosmic web surrounding great voids. The ordinary matter flows within the filaments of the web and forms galaxy clusters at the junctions. Galaxies are encased in huge dark matter halos, the same model explains.

According to some computer simulations carried out over the past decade, dark matter is composed of filamentary streams made up of tiny particles travelling at the same speed.

The study submitted to the Astrophysical Journal  by Gary Prézeau, a researcher at NASA’s Jet Propulsion Laboratory, envisages that each of these streams which orbit galaxies are larger than the Solar System and the region of the Milky Way galaxy we are located may contain multitudes  of them.

In the study, Prézau investigated what happens when these streams pass through the planets. Because dark matter interactions with ordinary matter are extremely rare in existing theories, they just zip through the Earth as if it doesn’t exist.

Simulations showed that the streams got focused into extremely dense filaments or “hairs” as they traversed the Earth’s core. As they exited the planet, the filaments extended from a “root” a billion times denser than the average, to a “tip” formed by particles that brushed past Earth’s surface.  According to simulations, the roots are located one million kilometers from the planet’s surface while the tips are twice as far.

Streams passing through Jupiter’s core will be focused too far greater densities, with root becoming a trillion times denser than average.

If the location of one of the roots could be accurately determined, a spacecraft sent there could harvest invaluable data which may help solve the mystery of the dark matter, Prézeau concludes.