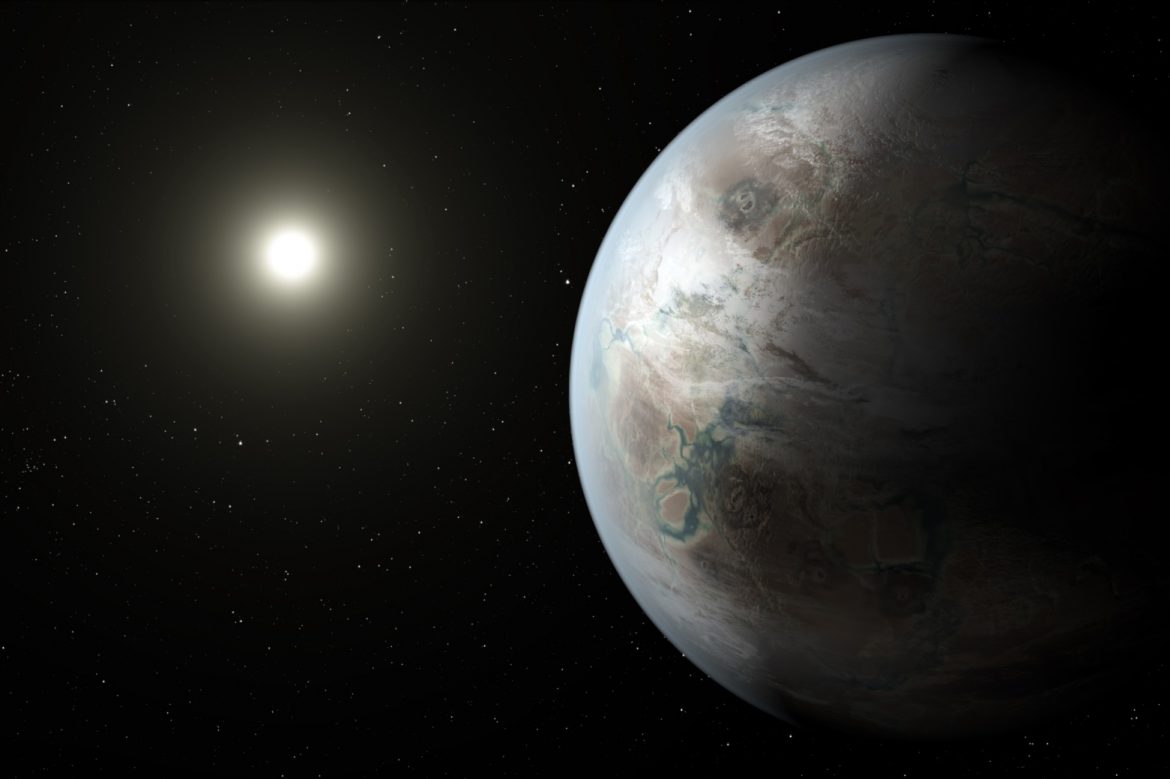 NASA’s half-crippled planet hunting spacecraft Kepler has discovered the Earth’s closest look-alike orbiting a star which, itself, is a Sun-analogue.

Found in Constellation Cygnus which the space observatory kept in its sights before going into semi-retirement, Kepler-452b is 60-percent larger than Earth in size.  It is orbiting a yellow star which is in the same spectral class (G-2) as the Sun, but slightly older.

Kepler -452’s diameter is 10 percent larger than the Sun’s. Its age is 6 billion years compared to the sun’s 4.56 billion. Although it has the same surface temperature with the Sun (about   5500 °C), it is 20-percent brighter because of its older age (the Sun itself was 25 percent dimmer than today when it was young).

The planet orbits the star once in 385 days, which is 5 percent longer than the Earth’s orbital period. Similarly it’s orbital distance is 5 percent larger than Earth’s.

More importantly, Kepler-452b orbits its star within a belt which astronomers refer to as the “habitable zone”, where temperatures allow the presence of liquid water on a planet’s surface. Liquid water is the essential ingredient for life as we know it.

And since Kepler -452b is 6 billion years old as its star, life has had more time to arise and evolve than on Earth.

But NASA astronomers cannot say for certain whether it is a rocky planet as the Earth, amenable to life, as its mass and density have not been determined yet.  But the smaller of the planets classified as super-Earths with masses 1-10 times that of the Earth, are thought to have rocky surfaces. The newly-discovered planet is the smallest so far of those within habitable zones.

Kepler had been launched on 7 March 2009 with the mission of simultaneously observing 150,000-odd stars at regular intervals in Constellation Cygnus to detect Earth-size rocky planets from the periodic dips they cause to the light of their stars as they transit their faces.  But the failure of the wo of its four gyroscopes in May of 2013 robbed it of the ability to remain locked on the target area, forcing its controllers to assign it to other tasks.

New planet discoveries are made by combing through the data already sent by the spacecraft.  NASA has announced that the number of confirmed planet finds by Kepler to have reached 1030. The number of planetary candidates, meanwhile, has also climbed to 4696.

The multitude of planets and planetary candidates detected only in a small patch of the sky lend support to speculations that the Milky Way may harbor tens of billions of potentially habitable worlds.