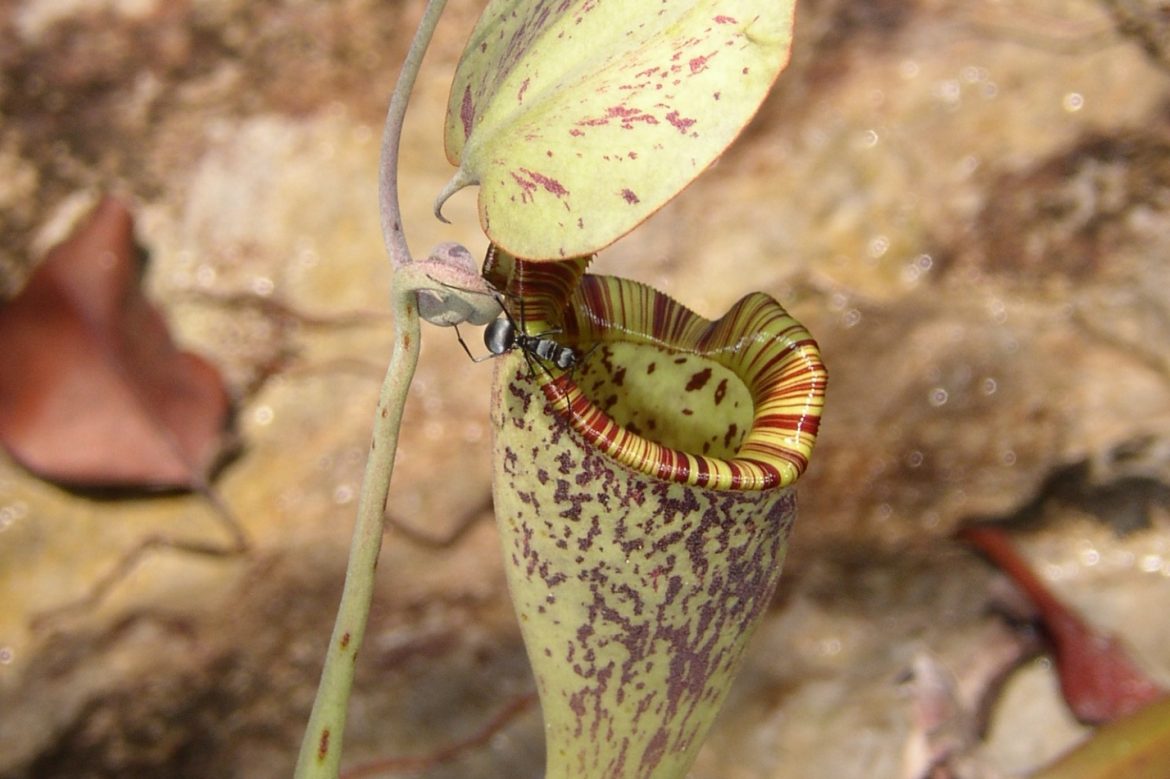 Carnivorous Plant Knows Whom to Spare

What sets apart Nepenthes rafflesiana, also known as Raffles Pitcher Plant, a carnivorous species endemic to some parts of Southeastern Asia and Malay Archipelago, from other members of the family is the less fragrant volatiles in its nectar used to lure insect victims to be digested in its reservoir of enzymes-rich fluid. This should normally reduce the numbers of unsuspecting visitors. But it seems that the plant has developed tactics to overcome the handicap.

It had been already reported that a variant of the wily plant, known as Nepenthes rafflesiana elongata, was renting its spacious aerial pitcher (these plants also have a smaller terrestrial pitcher) to a species of bats, Hardwicke’s woolly bats, which would not roost anywhere else. The rent was being paid in the form of feces and urine which provide the needed nitrogen.

In the new study, botanists, observing that some of the plants do not trap every insect, mostly ants, allowing them to venture past its “mouth” or peristome, to collect the nectar inside the rim, climb back and go their way, wondered why. Normally, the rims are slick with oils so the victims slip and fall to their doom inside the digesting liquid. But researchers noted that rims of some of the pitchers were slick during the humid hours, but became dry during the hottest parts of the day – the prime time for ants to forage.

A closer inspection seemed to solve the puzzle. The adventurous ants who got away with the prize returned to their nests to inform the colony of the source of the highly-nutrient nectar and its location. To test the assumption, researchers kept the persitomes of some of the pitchers slick throughout the day by wetting them with a sugary solution, leaving others untouched. Findings, published in the Proceedings of the Royal Society B. Showed that although slippery rims facilitated capture, those which chose to be patient and allow the ant scouts to spread the word were rewarded with 36-percent more kills.