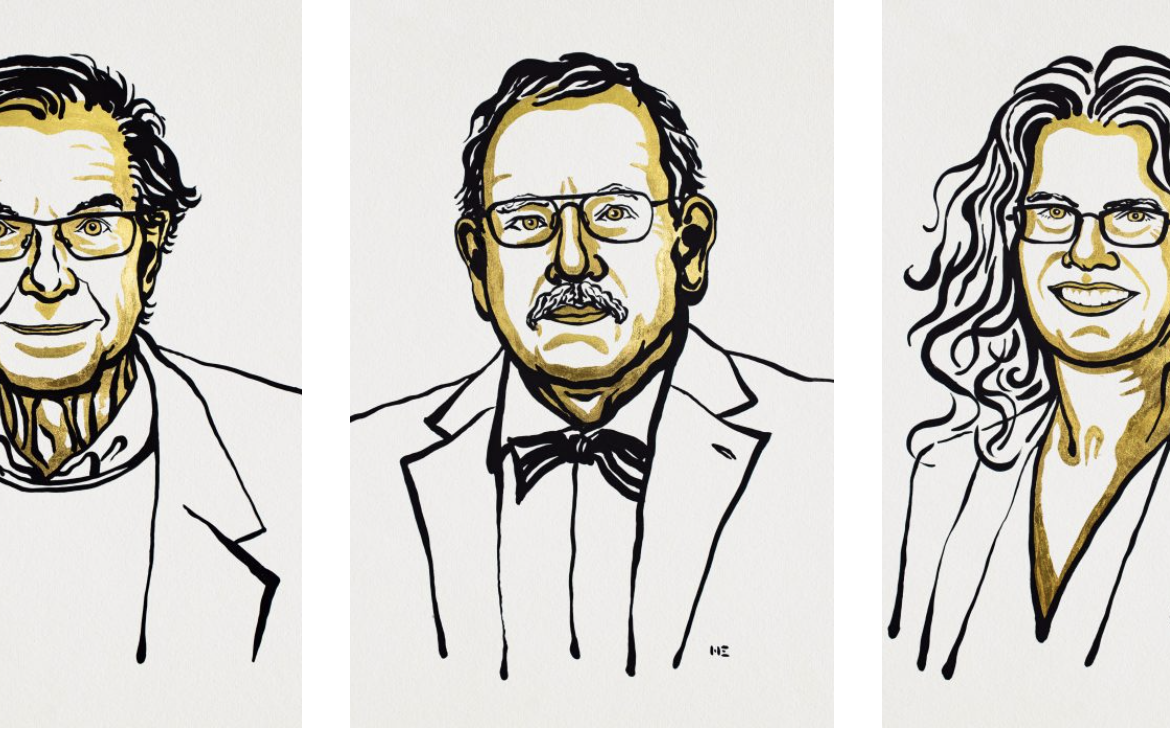 The 2020 Nobel Prize in physics was awarded to three scientists that provided valuable insight into our understanding of black holes, one of the most exotic phenomena in the universe. Roger Penrose received half of the award for mathematically proving (in 1964) that Einstein’s general theory of relativity solidly predicted the formation of black holes, and the other half was awarded to Reinhard Genzel and Andrea Ghez for the discovery of a supermassive compact object at the centre of our galaxy.

Reinhard Genzel and Andrea Ghez discovered that an invisible and extremely heavy object ruled the orbits of the stars in the centre of our galaxy. A supermassive black hole is the only currently known explanation.

Roger Penrose used ingenious mathematical methods to prove that black holes were a direct result of Albert Einstein’s theory of general relativity. Einstein himself did not believe that black holes, the super heavy monsters that nothing can escape from –even light-, really existed.

Whether black holes could form under realistic conditions was a question that occupied Penrose’s mind for a long time, until he discovered the answer while talking to a colleague as they stopped to cross the Street.

A compressed surface force all rays to point towards a centre, regardless of the outward or inward curvature of the surface. By using trapped surfaces, Penrose was able to prove that a black hole always conceals a singularity, a boundary where space and time ends. Its intensity is infinite, and there is no theory yet on how to approach this strangest phenomenon in physics. Trapped surfaces became a central concept in completing the proof of Penrose’s singularity theorem.

In January 1965, 10 years after Einstein’s death, Roger Penrose proved that black holes could actually form and described them in detail. Penrose’s groundbreaking article is still considered the most important contribution to the theory of general relativity since Einstein’s time. The topological methods he put forward are now invaluable in the study of our curved universe.

Reinhard Genzel and Andrea Ghez have been leading two separate groups of astronomers since the early 1990s, focusing on a region called Sagittarius A* in the centre of our galaxy. The orbits of the brightest stars that are closest to the middle of the Milky Way have been mapped with increasing precision. Measurements of both groups are on the same page when it comes to the presence of an extremely heavy, invisible object at the centre that attracts the stars and causes them to travel at dizzying speeds.

From our perspective on Earth, massive clouds of interstellar gas and dust hide most of the visible light coming from the centre of the galaxy. Using the world’s largest telescopes, Genzel and Ghez developed methods that reach all the way from these giant interstellar clouds to the centre of the Milky Way. Expanding the frontiers of technology, they came up with new techniques to compensate for the distortions caused by the Earth’s atmosphere, created unique tools, and devoted themselves to long-term research.

Infrared telescopes and the radio technology became the first tools to allow astronomers to see through this mess and view the stars at the centre. Genzel and Ghez’s pioneering work that used the orbits of stars as a guide, provided the most convincing evidence ever of a supermassive black hole in the centre of the Milky Way.

At the same time, observations are getting closer to black holes. The pioneering work of Reinhard Genzel and Andrea Ghez paved the way for a new generation of precision tests on the general theory of relativity and its strangest predictions. It is very likely that these measurements can also provide clues for new theoretical insights. The universe holds many secrets and surprises to discover.