Skip to content
Homepage ARTICLES Greenland was Indeed Green Once

Greenland was Indeed Green Once

Known as the world’s largest island, and famous for its glaciers, Greenland is an enormous piece of land connected to Denmark, in the north of the Atlantic Ocean. Two-thirds of the island is within the polar circle. It has a coastline of about 40,000 kilometres, a length close to the imaginary equator that encircles the Earth. Greenland looks entirely white from any satellite, as the layer of ice covering it has an average depth of 1,500 metres (which reaches down to 3,000 m in some locations). It has always provided a theme for literature and cinema with its harsh living conditions and the beauty of its landscapes. At the same time, these mysterious lands witnessed some of the toughest struggles of ancient explorers.

Scientists affiliated with the US military had carried out a secret project in Greenland in 1959, during the cold war, and had established a base to hide 600 nuclear missiles in a location close to the Soviet Union. During the Iceworm Project, disguised as a scientific discovery, the plan was to carve tunnels beneath the ice sheet to create a secret storage area. However, the target was found way too ambitious, and the camp was abandoned in 1967. Still, in 1966 before abandoning the camp, the military engineers did achieve a real scientific success: For the first time in the world, they managed to drill through the depths of the ice sheet and took samples from almost 1,400 metres below – strictly for research purposes. Some frozen mud probably didn’t get much attention at that time, and the cores were put in a freezer at Buffalo University in the 1970s, sent to Copenhagen in the 1990s, and languished until they were transported to another containment area a few years ago. During all this time, no one ever analysed the cores.

The frozen sample, which fortunately remained unthawed all these years, was received by Andrew Christ in 2019, a geology researcher at the University of Vermont. Christ and his colleagues first used a very basic method to melt the material and noticed dark particles floating on the water surface. When they examined the sample under a microscope, they figured out that the particles were in fact plant remains. “I went full-on mad scientist,” says Christ, while telling about that moment. The abrasive power of glaciers often completely destroys such ancient remains, but even as fossils, it is quite an unexpected experience to find textures of delicate plants that almost seem to have died yesterday. 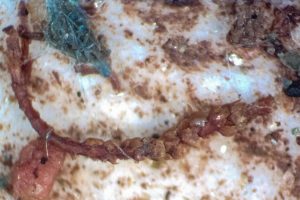 Finding plant remains 1,400 meters beneath the Greenland ice sheet has important implications both in academic terms, and also in terms of the future of humanity. First of all, it indicates that Greenland was not always covered in snow and ice. At least for a period in the past million years, or perhaps in the last few hundred thousand years, even such northern regions were discovered to have green areas with algae, lichens, and possibly trees (the sampling was taken from a location 120 km inland from the coast of Greenland, only 1200 km away from the pole). This means that all of the glaciers of Greenland can melt during the interglacial warm periods. We may say this is a moment of enlightenment also valid for the human-induced global warming period we are currently in. When compared with samples previously taken from other parts of Greenland, this reveals important information about how the entire ice cover has changed throughout history.

We may say that it was ironically worth the wait, which took more than fifty years, as the researchers used methods of analysis that were impossible at the time when samples were taken. Analysis of the aluminum and beryllium isotopes that form in quartz only when the ground is exposed to the sky and can be hit by cosmic rays. These ratios revealed how long the rocks at the surface were exposed or buried under ice. Another test used rare forms of oxygen found inside the ice within the sediment, revealing that the ice sheet was much thinner than it currently is. When these techniques were combined with studies of luminescence that estimate the amount of time since sediment was exposed to light, radiocarbon-dating of bits of wood in the ice, and analysis of how layers of ice and debris were arranged; the team determined that the majority of Greenland’s ice cover melted at least once during the past million years. 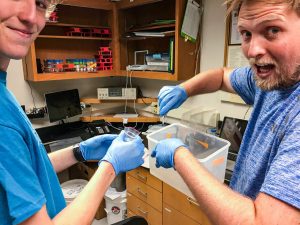 What these findings mean for humanity is quite clear. The real question is not whether the glaciers of Greenland are melting, but how fast they are melting. While an exciting development for science, this is a frightening fact for the inhabitants of this planet. Models predicting the melting speed of the glaciers, which contain enough water to cause sea levels to rise about 6 meters, may be erroneous. However, a rise of 6 meters in sea levels can erase almost all of the world’s major cities off the map. Furthermore, we already know that the polar regions are warming faster than the rest of the planet. Scientists predict an increase of 8oC in the next century. This is enough warming to melt all of the Greenland glaciers.

In the next step, the study will run a DNA analysis of the organic substances found, and the researchers will try to identify these plant species. It may even be possible to recreate an entire ecosystem. The findings so far suggest a tundra-like ecosystem, similar to one we have today in the Arctic region. Besides, not all of the samples taken in 1966 have yet been examined. Scientists say that it is possible to find layers from three million years ago in cores taken from further down, claiming that if plant remains are to be found, these will be the oldest organic material ever discovered from beneath the glaciers.[