Skip to content
Homepage ARTICLES Do Fish Have Electric Dreams? 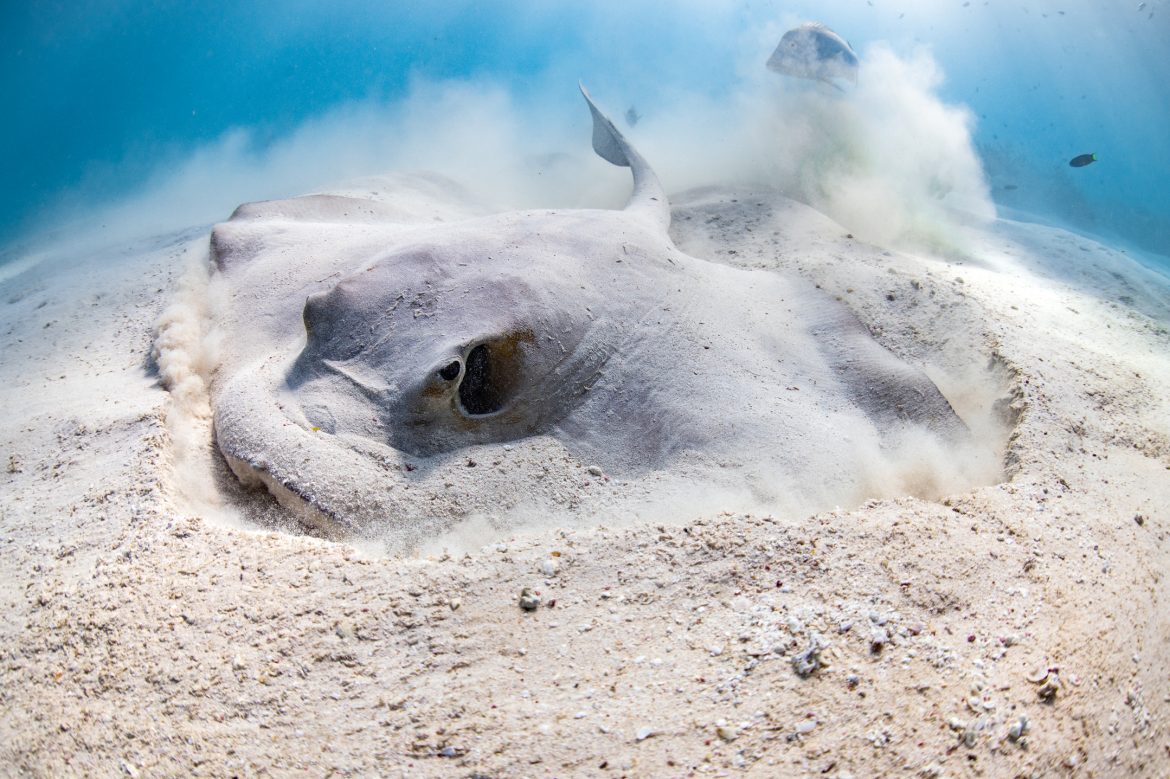 Do Fish Have Electric Dreams?

Did you ever wonder why hammerhead sharks or sawfish have such interesting anatomies? We know that certain skills acquired during the evolution process may change the anatomy of species or that new skills are acquired with changes in anatomy, and this results from the relationship between species and their environment or the changes in environmental conditions.

Before we get to hammerhead sharks, we may talk about another creature that has been studied extensively for its peculiar anatomy: the elephantfish.

The elephantfish (Mormyridae) usually live in turbid fresh waters and hunt at night. They have a rather interesting nose structure –hence their name, but what really excites scientists is their ability of electrolocation. Elephantfish can generate very short and fast electrical “pulses” around their bodies with the help of a special organ embedded in their caudal fins, and they can do this 80 times per second. Their entire skin, and particularly the famous elephant-trunk-like structure (which is in fact an extended jaw part) is covered with electrical receptors. These receptors allow them to detect how the electrical current they generate reflects from other creatures and objects around them or any changes in the electric field caused by these obstacles. This ability helps the fish to “see” their surrounding in a way, which aids in hunting and preventing them from being hunted. Through electric currents they can also measure the distance of obstacles –whether alive or not, identify their shapes and what they are composed of, and even recognize whether they are dead or alive. It also helps them find their favourite food, mosquito larvae, even if they are hidden under the sand. It works so well that the fish can even tell whether what’s hiding under the sand is a mosquito larva or something else.

If the object the fish encounters is less conductive than water (a rock, for example), the electric current circulates around the object. As the current’s intensity decreases pointwise, a “shadow” is created on the receptors embedded in the fish skin. If the object is more conductive than water, like another fish, the electric current passes through the less-resistant fish, and thus the current’s intensity increases pointwise, creating a “brightness” on the receptors.

These clever receptors are gourd-shaped cavities with a diameter of about 0.1 mm, and host a group of sensory cells at their base part. The animal’s skin contains approximately 15,000 of these receptors, which work like miniature voltmeters and sense differences in voltage. This, in turn, enables the fish to “draw” a very clear picture of its surrounding.

Elephantfish are not the sole example of such advanced electrolocation. Another is the knifefish (Gymnotodiae), which is also popular among scientists. Species of this group, which have a body length varying between 30 and 90 cm, can create stable electric fields around them by using the electric organ in their caudal fins, and thus can perceive what is going on in their surroundings. However, we should note that this electric field covers a limited distance. Electrolocation is a sense that allows perceiving what happens within only a few centimetres. Although in some cases the fish can expand the electric field by burning more energy, this expenditure is only reserved for matters of life and death. Also because of this, the knifefish have evolved the ability to swim backwards. In other words, instead of turning back to catch prey noticed at the last moment due to the limited electrical perception, they can simply swim backwards and not miss their prey.

At this point, the skill of electrolocation may have begun to sound familiar to you. Another skill famously used by bats, called echolocation, follows a very similar working principle: navigating and hunting by “reading” the reflection of sound waves (We also know of species that can do this underwater, such as whales and dolphins). The difference in echolocation is that sound waves are emitted instead of an electric current, and ears are used instead of electroreceptors for detecting reflections.

Now, we may finally talk about the curious anatomy of hammerhead sharks and sawfish. The reason behind their interesting looks is passive electrolocation. Electroreceptors in the heads of these species allow them to hunt by scanning as wide an area as possible thanks to their anatomy. When a hammerhead shark wanders around the seafloor, turning its head left and right, it is actually looking for creatures hiding under the sand. The “saw” of the sawfish, on the other hand, makes up almost one-third of its body and can detect any prey quickly, which the fish can tear apart with the horizontal teeth located on its saw.

Some creatures have mastered using this sense as a weapon. A species of electric eel (Electrophorus electricus) can detect its prey with a weak electric current, just like the elephantfish or knifefish, only to paralyze it with a strong electric current. Probably because of this, their electric organ is much larger than those of other species.

It’s not surprising that this ability is almost exclusively found in aquatic species, since water is thousands of times more conductive than air. Still, it is quite unexpected that relatively few fish among all sea creatures possess this skill. For example, we know that some catfish have passive electrolocation skills, and even feed on electric fish. The Guiana dolphin, which lives in South America, also has electrical receptors, but only around 8-14. Some stingrays may also generate electric currents.

Receptors required for passive electrolocation are also seen in some terrestrial or amphibian species: for example, salamanders and platypuses (platypuses have 50,000 electroreceptors in their duck-like beaks). It is thought that the echidna, a close relative of the platypus, uses electroreceptors on the tip of its snout to detect and hunt insects under moist soil.

This skill is used not only for hunting but probably also for communication. To protect territory and to mate, for example. An interesting phenomenon is observed when two glass knifefish (Sternopygidae) come near each other: They change the frequency of their electric currents, and probably due to this, the electrolocation ability of neither fish is compromised.

Electrolocation is just one of several methods developed by species living on Earth to sense their environment. Since we humans do not have this skill (or sense), we do not know exactly how the brains of these species process signal coming from their special receptors, and we probably will never learn. The same is also valid for other senses. Some species are able to hear sounds of much higher or lower frequencies than we are able to, some can see infrared, and some can perceive vibrations. Although we can define and understand these abilities in physiological terms, it seems impossible for us to know exactly how these species see, perceive and interpret the world.