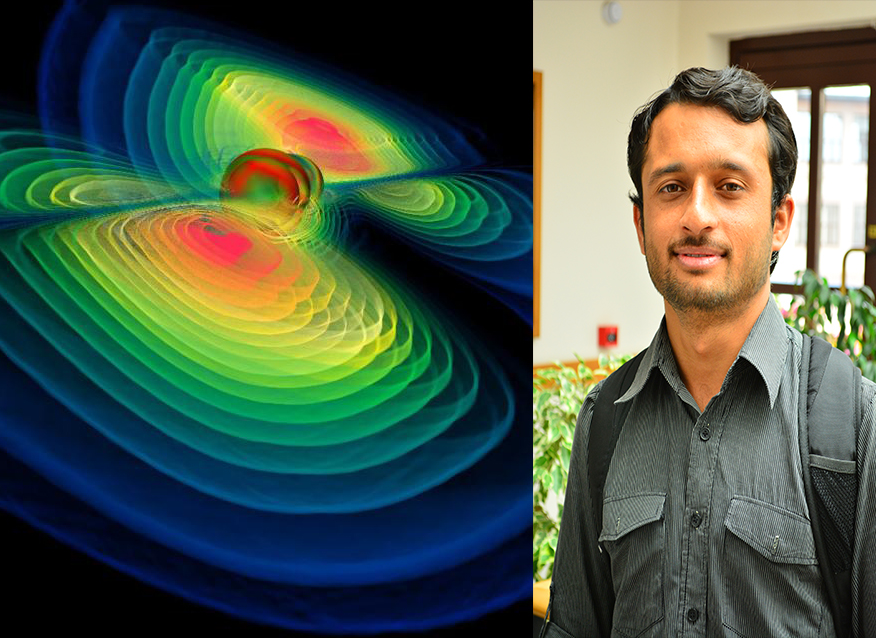 History was made earlier this month when researchers simultaneously confirmed the detection of clear gravitational wave signals identified as the merger of two black holes 1.3 billion light years away. Koç University alumni Imran Khan is a researcher with the LIGO-Virgo collaboration, an international community of researchers whose combined skills, knowledge and ideas led to the discovery. We caught up with Imran to find out how he ended up working on one of the most significant scientific discoveries of the century.

What inspired you to join a PhD program in Astroparticle Physics?

I have a lot to thank the M.Sc. program in Optoelectronics and Photonics Engineering at Koç University, it is a quality program that has helped me set my future goals and achieve a good PhD position.

After developing good experimental skills with optical resonators in particular and optics in general at the Koç University Microphotonics Research Laboratory under the supervision of Prof Ali Serpengüzel, I became interested in application-level research in photonics for my intended PhD program. The European Virgo collaboration accepted me into the GraWIToN program – an Initial Training Network aimed at training young researchers investigating gravitational waves and funded by the European Commision Marie Skłodowska-Curie actions (MSCA). In the Virgo collaboration I am part of the team responsible for the thermal compensation system of the Advanced Virgo detector, and I work in particular with squeezed light for gravitational wave astronomy. Since the Marie Skłodowska-Curie fellowship program is designed to provide the early stage researcher with a PhD degree by a host institute, I am enrolled to research gravitational waves at the PhD Astroparticle Physics program at Gran Sasso Science Institute.

How long have you been involved in gravitational wave research?

I have been working with the LIGO-Virgo collaboration since November 2015, at the Italian National Institute of Nuclear Physics (INFN).

How did you end up working on the project to detect gravitational waves?

Prof Ali Serpengüzel helped me understand the importance of photonics to future scientific developments and consequently, during the second year of my M.Sc I started investigating institutes and companies offering both application-oriented research work in photonics and a PhD fellowship. Among the many options, I learned of a vacancy within the thermal compensation system team of the Advanced Virgo detector in the GraWIToN Marie Skłodowska-Curie ITN program. So it is true to say that my interest in photonics and application-oriented research has led me to the world of gravitational wave detectors.

What advice would you give students thinking of pursuing research into gravitational waves?

Students who have experience in optics/photonics in particular and want to work with cutting edge technologies will find the field of gravitational wave detectors challenging but very exciting at the same time. Future state-of-the-art ground-based and space-based gravitational wave detectors will have much greater sensitivity and be of huge importance for future discoveries. So I would really encourage students to come and join the field of gravitational waves and explore the accuracy and precision we can achieve with these optical detectors. Moreover, Gran Sasso Science Institute (GSSI) is offering an excellent program in Astroparticle physics covering many of the particle physics research areas under the supervision of very well known physicists. I personally enjoy the academic environment, which is always helpful and diverse. And of course experience working at Gran Sasso National Laboratories (LNGS) with such a wide community of scientists from all over the world will be a boost to anyone’s career.

What’s next for gravitational wave research?

Next on the agenda is further observation of some of the most violent events that take place in the universe, such as exploding stars, and merging black holes. With the initial discovery of gravitational wave signals we confirmed the existence of binary black hole systems. These were previously difficult to detect because black holes do not radiate light. More data will help scientists in further improving models and our understanding of what takes place when two black holes merge. As gravitational waves do not interact with matter and reach us unobstructed, it gives us a crystal clear means of exploring the far reaches of the universe. Gravitational waves will help us understand astronomical objects in a way previously not known to us.

What’s next for you?

For me, I would like to work on further improvements and advancements in gravitational wave detectors (I like to be at the cutting edge of experimental technology). Working in photonics is always interesting for me and I would like to take this opportunity to further improve my skills while working with the latest technologies. I am honored to be a part of a team of scientists and engineers in the LIGO-Virgo collaboration, and to be able to learn from them as we contribute to the advancement of gravitational wave astronomy.