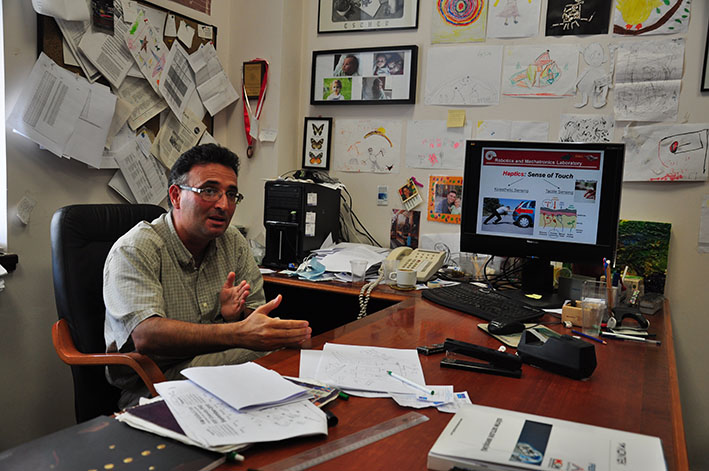 Forget about what you’ve seen in the movies. No human-likes in various stages of completion hanging from the walls. No mechanical hand tapping your shoulder from behind to bring your heart to your mouth. Nor is there a pair of eyes from a shady corner following your movements. Nothing that even remotely fits your mental image of a robot gained from watching so many episodes of Star Wars and video footage of famed Asimo.

It is almost an anticlimax. To the untrained eye, the lab looks no more than an electronics repair shop with desks lining the walls stuffed with chips, wires, some unassuming contraptions, a kiosk resembling a vending machine and what looks like the chassis of a toy car on the floor.  But you soon discover that the lab was not set up to cater to the eye. It is the sense of touch which reigns supreme here, and will in the area of robotics in the coming decades, foresees Professor Çağatay Başdoğan, with full confidence.

The catchword in the field is “haptics”, notes Başdoğan, a young and energetic researcher with a cheerful countenance,  who heads the Department of Mechanical Engineering and runs the Robotics Institute. The unfamiliar word refers to the science and technical applications of the sense of touch, which, “sadly is a forgotten sense, with vision universally given the No. 1 seat.” But touch, he says, can legitimately lay claim to being the second most powerful sense, because, even if we are not consciously aware of the fact, sense of touch rules our everyday life, from walking and sitting to manipulating tools.”Without touch, there wouldn’t even be a reproduction system”, he adds with a chuckle.

The reason he was attracted to haptics is the fact that it offers a niche for the technological “wannabes” to exploit. “There was no sense to write the next paper on top of the ten-thousand already written on industrial robots”.  He sees a chance for Turkey on this relatively untrodden ground, provided a concentrated effort on the part of the government and the industry, which, however, he decries is far from the level required, with little, if any, concern for R&D and very limited demand for the products of frontier research from the few universities able to conduct it. “There are just four laboratories in the world, using this (haptic) technology, ours being the fourth after the ones in Korea, the United States and Europe. But of this four, we are in the least advantageous place because there is a very limited scope for the integration of this technology to the industry.”  In contrast, he notes with admiration which sounds tinged with some envy that “Korea, which ranks third in the field after Japan and the United States, has identified it as an area of national interest with electronic giants Samsung and LG actively conducting haptics research ─ and Apple rumored to be doing some secret research of their own ─ not without reason, too: the cell phones of the coming years will be far more proactive. Currently, such devices as iPhone or iPad sport capacitative displays which sense your touch with an array of sensors. But with electrostatic actuators which provide vibrations, lots of information could be passed on through the sense of touch.  The technology is now able to program different senses, and once put into the phones, it will take the user to entirely different dimensions.

As for the basics of the technology, he identifies three components that go in the construction of a haptic robot:

How does a human feel the touch?

How that sense can be built into a robot?

How can a human and robot interact through touch?

The sense of touch can be discerned in two ways, he explains:  There is tactile sensing, which you do with your finger tips, or more generally, with your skin, like you do when inspecting the texture of  a piece of cloth or the smoothness or roughness of a surface, and kinesthetic  sensing which you do with your joints like when you are pushing against a wall or bumping into someone. And in the lab, his graduate and PhD students treat us to the fruits of their toil built with uses for one or the other form of sensing.

The kiosk’s function mentioned at the start appears after I reluctantly agree to put my finger on the display on solemn assurances that the series of dots there is not a part of a plot to test my intelligence with everybody looking on. The screen vibrates when the wrong move is made (on purpose!) when trying to complete a sequence. Another program makes your finger tip feel the difference of crossing a series of widely separated parallel lines and another with lines closely interspaced. It is a perfect tool for hands on training, starting with pre-school education, leaving aside many other potential uses.

As for the other item mentioned earlier, namely the toy car chassis over which a boy would hardly lose his sleep, turns out to harbor a feature over which industry giants would lose theirs. “Suppose you are driving on a multiple-lane express way, approaching a crossroads, “Professor Başdoğan explains. “The navigator on the windshield has been pointing at the correct direction for minutes but who can concentrate on anything with the din in the car with its complement of passengers engaged in loud chatter interspaced with explosive laughter.  But if vision fails you, you can always rely on dependable touch. The right side of the steering wheel wired to the navigator starts to vibrate, alerting the driver to the turn he has to make. And suppose you enter a roundabout. As you enter, all the (built-in) motors start to vibrate; and when you are approaching the correct exit, they all stop.” ” Cool, eh?  Something major producers on this side or other of the Atlantic would surely want to incorporate into their new concept models. And Başdoğan is well aware of its worth: “This is something very innovative, and surely we are looking for a home for this”, he says laughingly, “But where, I don’t know;  (local carmakers) TOFAŞ, or Ford or others, we’ll see. But maybe the best way would be collaborating with a company producing navigation devices.” the best way. He admits that they “could have done better on the promotion side, although it has appeared in the (UK_based popular science magazine) New Scientist.” He would prefer a better support from the University in the realm of public relations, but sees signs that it would be forthcoming with the projected organization of a get-together with the industry representatives, for which he was asked to name his choice of invitees.

Next stop on the tour is a haptic robot devised by M.I.T. researchers, with 20.000 copies used throughout the world to train the users to feel the forces at their fingertips, in other words, to feel the objects in virtual reality.

At another display, with a home-written program, the robot “learns” your intentions and takes over to negotiate more difficult sections of a pit-strewn course. It has a potential use for the rehabilitation of patients.

Another display takes you into a surgery room, or more precisely, to the insides of the virtual patient. The device is a purchased medical simulator, programs for the operation of which and the modeling of the virtual organs wee written at the lab. With the simulator novice surgeons could practice laparoscopic surgery ─exploiting natural orifices or minimal incisions─ instead of honing their skills on live patients at the latter’s risk. With virtual probes, they manipulate the pre-modeled organs (in this case, clamping the bile duct, in preparation for the surgery), or haptically learning their consistency and the right force to be applied for the incision when operating on a variety of tissues besides other features which need to be mastered for a successful operation.  Otherwise, a surgeon would have to perform 60-to-70 operations on live patients before he could reliably handle the controls, Professor Başdoğan points out, foreseeing the proliferation of simulators within fifteen years for a diverse set of organs like heart simulator, liver simulator etc. “It’s better for everybody if the expertise is gained in virtual reality”.

The secret for the success of the lab, Professor Başdoğan notes, is the interdisciplinary teamwork provided by a collection of well-motivated mechanical and electrical engineers and computer scientists, “a perfect match”, working on their post-graduate projects.

One is Buket Baylan, a graduate of the Mechanical Engineering department of the Middle East Technical University working for her Master thesis on vibrotactile displays. She was drawn here because of the broad range of opportunities offered, collusion of her interests and the main lines of research done here, as well as a relatively well-stocked cofferwhich ensures the availability of state-of-the-art equipment. “For instance, we have a ten-thousand-dollar atomic force microscope”, she points out to impress. The device ─ for the study of nano-scale objects ─ had been manufactured at another lab of the Robotics Institute, Başdoğan explains. Her current work is on piezo-actuators for displays, which physically vibrates the screen.

Another female researcher is Senem Ezgi Engin, a computer scientist, a graduate of Istanbul’s Boğaziçi University who has had her Master’s degree from SUNY (State University of New York) and now working here for her Ph.D. on haptics and gesture recognition, more precisely on ways of combining haptics and gesture recognition for a more natural interaction.

“For instance you want to open a door in a virtual environment and move your hand to open the door. What we want to do is creating a system by which we could provide the haptic feedback to your hand and at the same time recognize your gesture as intending to open the door.” The group was drawing up a request for funding from the Scientific and Technological Research Council of Turkey (TUBITAK) for the project.

Enes Selman Ege, an electrical engineer with master’s degree on electrical machines design from the Istanbul Technical University working here for a Ph.D., “volunteers” (after due persuasion) to represent the male complement of the lab. He is providing the know-how of his particular discipline to the projects which call for inter-disciplinary collaboration. His showpiece is the kiosk described earlier, an ordinary type one is accustomed to see as queuematics in banks, whose electrical capacitance he has modified to make it provide vibrational feedback when touched. As for the potential customers, Başdoğan says prospects are more promising for smaller scale displays such as tablets or iPads, which could give haptic feedback with the same technology, which, incidentally, could be perfect teaching-aids, particularly for pre-school children.

With that we end the tour of a high-end center of applied research with pride in our hearts and what may prove to be a lasting “phantom” feeling of vibrations when you touch a glass surface.