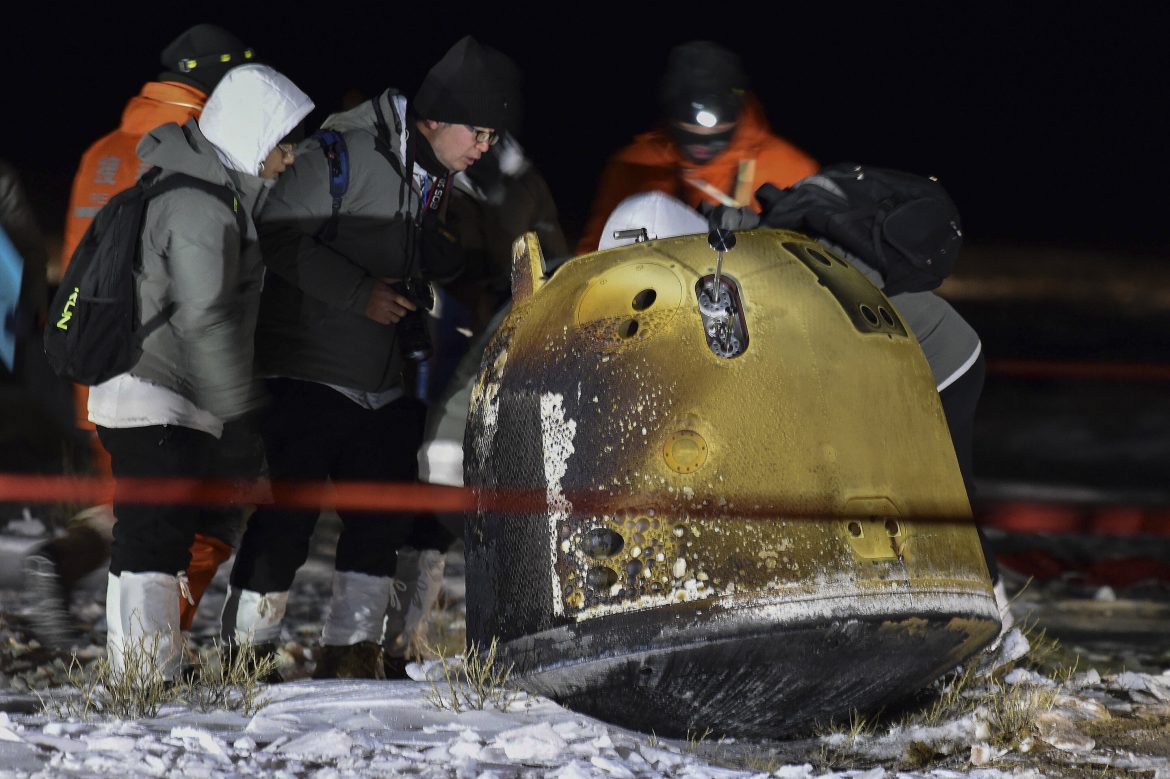 For the first time in more than four decades, humans brought lunar rock samples to the Earth. Chang’e 5, the lunar capsule of the Chinese space program returned to Earth on December 16th, with fresh samples of lunar rock on board, for the first time since 1976, to offer new insights into the history of our Solar System.

The capsule first separated from its orbiter module and performed a bounce off Earth’s atmosphere to reduce speed before landing with its parachutes.  After the initial rescue mission, the capsule and its cargo of rock samples were sent to the space program campus in Beijing to be dismantled and analysed.

Two of the four modules of Chang’e 5 landed on the Moon on December 1st. The solar-powered lander was equipped with cameras, ground-penetrating radar, and an imaging spectrometer to make measurements on its surrounding. However, the lander’s main mission was to collect samples from the surface and up to 2 meters underground, as it intensively did over the next two days.

On December 3rd, these samples were launched from the surface via an ascent vehicle to meet the other two modules of Chang’e 5 modules: an orbiter and a return capsule. On December 12th, these began their return journey back to Earth, resulting in a landing in Inner Mongolia.

The newly collected lunar rock samples are thought to be billions of years younger than those previously obtained by the United States and the former Soviet Union, offering new insights into the history of the moon and other stellar objects in the solar system.

Samples will be analysed for their age and composition, and data on these are expected to be shared with other countries. Their ages will hopefully help fill the information gap in the history of the Moon between roughly one billion to three billion years ago.

The Hayabusa2 spacecraft was launched in 2014 to reach a near-Earth asteroid called Ryugu. It arrived at Ryugu in 2018 and took about a year and a half to observe and sample the asteroid, before leaving in order to release its sample capsule into the Earth’s atmosphere. On December 5th, the capsule landed in the Woomera Prohibited Area in Australia. Scientists from the Japan Aerospace Exploration Agency (JAXA), who carried out the mission, then flew the capsule to Japan.

Scientists later opened one of the three sample compartments and confirmed the presence of a fairly large amount of asteroid dust inside it. These compartments were where the spacecraft had deposited the pieces of Ryugu that it captured during two collection manoeuvres.

During one of these sampling efforts, the spacecraft captured pebble-sized rocks from the surface of the asteroid; and in the second attempt, it shot a copper bullet into the asteroid to expose the underground material. All collected samples will be sufficient for scientists to understand how the harsh environment of space affects Ryugu’s surface.

Researchers hope that subsurface samples from the asteroid could provide information from billions of years ago, unaffected by space radiation and other environmental factors. JAXA scientists are particularly interested in the organic matter in samples in order to learn how they are distributed throughout the Solar System and whether they are associated with life on Earth.

Following the work in Japan, some samples will be shared with other international space agencies for additional research planned to begin in 2022.

Meanwhile, Hayabusa2 embarked on an 11-year journey to another asteroid to investigate possible defense methods against meteorites heading towards Earth.

Before these, NASA’s Stardust and Genesis missions had collected interplanetary material in the 2000s. Hayabusa, the predecessor of Hayabusa2 owned by JAXA, brought samples from the asteroid Itokawa to Earth in 2010. JAXA is also working on a mission to retrieve samples from Phobos, a satellite of Mars.