Skip to content
Homepage ARTICLES Why are Insects Disappearing?

Why are Insects Disappearing?

If you dislike insects, we have good news and bad news for you. The good news is that 40 percent of the world’s insect species are in danger of extinction. The bad news is that cockroaches and black flies won’t be affected.

The bitter joke aside, whether we like insects or not, they fill up a large portion of the food chain, and they’re too many: the number of insects per person on the planet is 1.4 billion! In addition to being an important food source for birds, bats, and mammals (including humans), they are responsible for the pollination of three-quarters of agricultural products on our tables. They are experts of recycling wastes and keep the pest populations under control. To summarise: if we lose the insects, this will result in major changes in our lives.

Studies on insect biodiversity often focus on a particular species or a particular region. Therefore, there was not a single study covering the whole planet, until now. An article published in the January 2019 issue of the journal Biological Conservation compiled 73 studies carried out in different parts of the world for 40 years, and revealed a dramatic conclusion: Insect populations are in decline all over the planet, and at this rate, 40 percent of all insect species are in danger of becoming extinct within the next few decades!

What Is Going on?

According to the research, human beings are responsible for this, and the reasons are listed as follows:

The main cause of degradation in biodiversity is the pollution and destruction of natural ecosystems, especially forests and wetlands, in order to produce food. This situation increasingly worsens with each passing day. Over the last 60 years, more than half of the world’s tropical forests have been destroyed due to agriculture, animal husbandry, and mining, as well as fires and urbanisation. According to WWF, we are losing 27 soccer fields of forests every minute. If it’s any consolation, the United Nations FAO data suggests that forests are better managed in recent years, and so we are losing our forests more slowly.

An interesting recently-published study by NASA claims that the Earth is greener than it was 20 years ago. Looking at the satellite images collected over 20 years, especially in China and India, there is a tremendous amount of greening. This is due to the serious reforestation and intensive agricultural practices carried out by the governments of China and India. Although far from compensating for the lost natural ecosystems, knowing that someone is planting trees gives enough hope.

The downside is, as almost all of the insect biodiversity surveys are conducted in Europe and North America, the impact of natural habitat loss in Africa and South America, where the most intense deforestation occurs is possibly more disheartening. More research is needed in these regions.

Global warming primarily affects tropical ecosystems, which are built on delicate balances. The number of arthropods in the rainforests of Puerto Rico decreased by 78-98 percent over the past 36 years. Because the food chain is disrupted, bird, frog, and lizard populations in the same regions are also in a parallel decline.

Let’s go back to the insects.

Among terrestrial insects, the ones most affected by the danger of extinction are lepidopterans (butterflies and moths), hymenopterans (membrane-winged insects, such as bees and ants), and coleopterans (beetles).

Anurag Agrawal, a biology professor at Cornell University says that butterflies and moths in particular are indicators of healthy habitats because their survival depends on a delicate balance. Sadly, the number of butterfly and moth species are in serious decline, and one third is in danger of extinction. 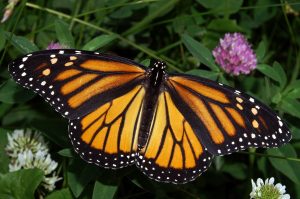 The population of butterflies wintering in California has decreased by 97 percent in the past 20 years. The population, 4.5 million in the 1980’s, was estimated to have dropped down to 30,000 last year. Annual fluctuations in butterfly populations are considered normal, but a decrease of up to 80 percent in one year is far from normal. Again, there’s no single culprit. Habitat loss, pesticides, and of course, climate change…

As insects living in temperate climates can tolerate a wider temperature range when compared to the ones living in tropical climates, it is also surprising to see that the climate change causes an increase in the number and geographical distribution of some butterfly species in Northern Europe. However, habitats of bees and dragonflies adapted to cold climates are definitely shrinking.

As a result of a 27-year-long study covering 63 of all the protected areas in Germany, a 76% decline was detected in winged insects (in terms of biomass) in 2017. Apparently, the numbers of these species have been in a continuous decline for almost thirty years.

It is not possible to scientifically say exactly what is happening in Turkey, as there is no regular census. Assoc. Dr. Evrim Karaçetin from Erciyes University’s Department of Environmental Engineering states that the winged insect population in our country is also in a downward trend as it is in Europe. Specifically, in observation sites near cities and ones close to agricultural areas, the abundance is not the same as it was 10-15 years ago.

Sudden bee fatalities in 2007 was a shock for the ecological community. This phenomenon, which could not be attributed to a single cause, was called the Colony Collapse Syndrome (CCD). Diseases and infections, parasites, lack of genetic diversity, seasonal stress, toxic insecticides, decreasing nutrient abundance due to the increase of monoculture areas, and extreme climate events of recent periods are considered the general causes for colony collapses.

Biologists found more than 150 different chemical residues in bee pollen. Eric Mussen, a beekeeper from the University of California calls this a lethal “pesticide cocktail”.

The factors triggered when all these amass cost the beekeepers a hive loss of 40 percent in America, 30 percent in

Europe, 29 percent in South Africa, and 13 percent in China. Although there are no reliable statistics on hive loss in Turkey, Uludağ University’s Centre for Beekeeping Development Implementation and Research claims that bee loss has risen from 10-20 up to 70 percent in some regions.

Since 12 percent of the planet’s surface is used as agricultural land, agricultural activities have a direct impact on insect populations. Especially the loss in bee populations is associated with the Green Revolution, which started in Europe and resulted in the spread of intensive agricultural practices. This period, the second half of the 20th century, also coincides with the beginning of declines in bee species in Europe. Once the use of synthetic fertilizers replaces crop rotation, which enriches flora, it becomes hard for the bees to find food. When all these are considered, in a country where 70 percent of the surface area is used for agriculture, such as in England, the extinction of several bee species is not surprising at all –although it is sad.

What Happens Without Insects?

We don’t know if humanity would actually live for only four years without bees, as Einstein said, but they are critical pollinators in agricultural production. Just wasps alone are responsible for 20 per cent of agricultural pollination.

The absence of insects that constitute the structural and functional basis of many ecosystems around the world for 400 million years will not only affect pollination but may indeed result in a major catastrophe. Natural cycles can be disrupted without the existence of saprophytic organisms, scarabs, and insect larvae that play an important role in nutrient cycles by recycling plant and animal material. In addition, a sequentially triggered disruption in the food chain may even lead to mass ecosystem collapses.

Prof. Dr. Dave Goulson from the University of Sussex says that global warming may clear the way for some rapid breeding insect species, and short-term insect invasions may occur if other animals that prey on these species become extinct also due to global warming. We have to keep in mind that particularly cockroaches and flies, which are able to develop immunity to pesticides, are very good at adapting to human settlements.

With the decrease of small family farms in Europe and America, the insects lost their habitats, especially the open fields and grasslands where wild flowers grew. Wetlands and marshes were desiccated. Applications, laws and regulations to recover these habitats have to become prevalent. And first of all, there is a need to change the destructive agricultural system. Otherwise, insects are in danger of becoming completely extinct within a few decades. David Wagner, an ecologist at the University of Connecticut, stresses the need for long-term research to verify the true extent of this danger.

The UN Food and Agriculture Organization reports that small family farming methods that need and support biodiversity can be at least as efficient as the intensive industrial agriculture. Besides, in only a quarter of the planet’s total surface area currently used as agricultural land!

We can create insect-friendly spaces in places we inhabit. We may propagate the plants that bees and butterflies like, and build “insect hotels” that insects may visit. Beekeeping practices keep becoming more widespread in cities. Everybody can “adopt” a hive. For example, “Have a Hive (http://carik.org.tr/sample-page/)” Project of the Association for the Protection of Environment and Bees.

As the inhabitants of this planet, we must do our best to protect life and biodiversity. We should not forget that humanity covers a very small period of time on our planet, which has a history of 4.5 billion years. Nature will continue its existence even after we leave, with a whole new variety of species instead of extinct species.