Skip to content
Homepage ARTICLES When The Cities Will Submerge? 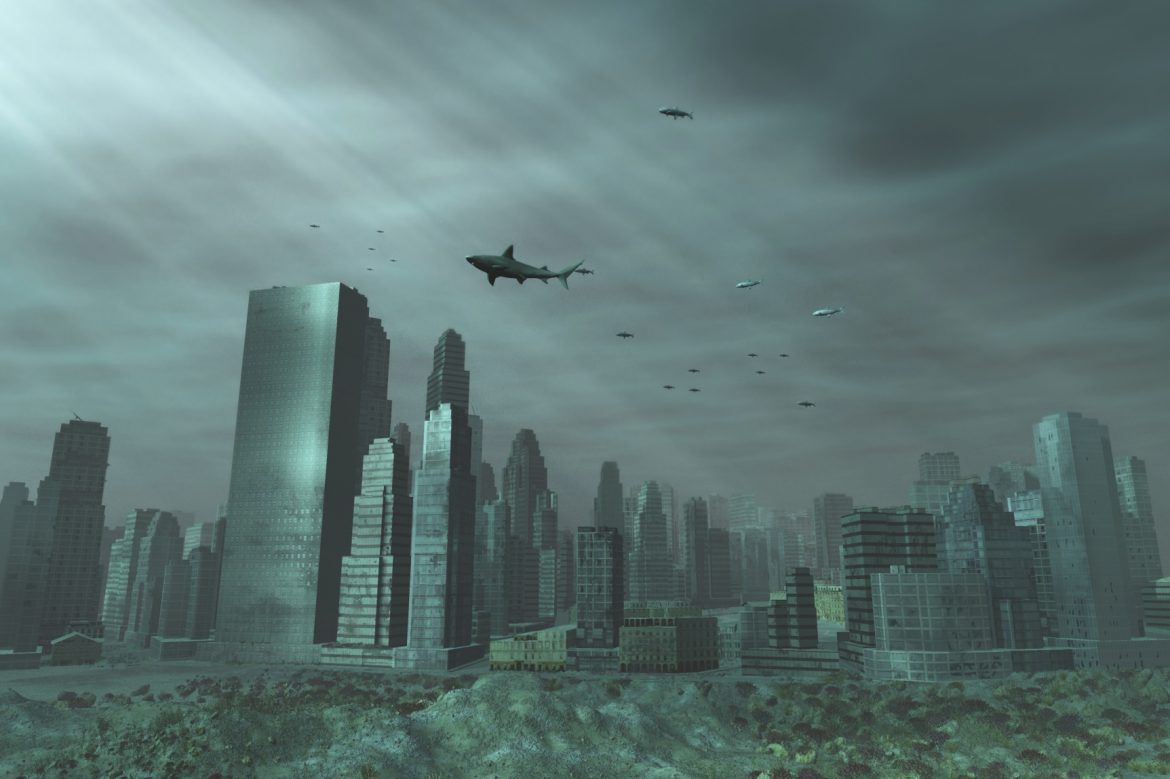 When The Cities Will Submerge?

If fossil fuels are burnt at this rate…

The picture above may be exaggerated; but not that much: A new study by an international team of scientists has revealed that if all the world’s remaining fossil fuel reserves were used, sea levels could rise 60 meters. The evaluation is based on predictions that global warming driven by fossil fuel use would cause the collapse of the East Antarctic Ice Sheet.

According to computer simulations the team has run, if all the accessible fossil fuels were utilized, the 3000-meter-thick Antarctic ice sheet will be destroyed and 10 trillion tons of carbon will be released into the atmosphere.

The researchers warn that if this scenario plays out, coastal cities where 1 billion people live, including New York, Tokyo, Hong Kong, Shanghai, Calcutta and Hamburg will be submerged, in a process starting by the end of this century to last thousands of years.

In the new study, the team modelled the evolution of the ice sheet covering Eastern Antarctica up to a height of 3 kilometers for the next 10,000 years. The reason for the extended timespan is that once released into the atmosphere, carbon can stay there for thousands of years.

According to the researchers who point out that the smaller Western Antarctic ice sheet had entered an irreversible process of ice loss, it will become unstable in case the carbon emissions maintain their current rate for another 60-80 years. The calculated volume corresponds to just 6-7 percent of 10 trillion tons of carbon which will mix into the atmosphere should all available fossil reserves be used.

There are varying estimates from different sources as to the volume of remaining reserves and the time they will be exhausted.

Contributing to the ambiguity are the ever new discoveries of new reserves and the expectations that seabed methane hydrate deposits, with a potential energy yield far in excess of the sum from all coal, oil and natural gas reserves combined, could be operated commercially in future after engineering hurdles are overcome and safety issues addressed. One source puts world coal reserves at 995 billion tons, followed by known oil reserves totaling 1.3 trillion barrels (190 billion tons) and natural gas estimated with a reserve potential of the equivalent of 1.3 trillion barrels  (170 million tons).

According to a calculation, the discovery and exploitation of oil reserves will peak 28 years from now and natural gas reserves will similarly start diminishing in 30 years’ time. Coal reserves are predicted to last for another 100 years.

Carbon rising to the atmosphere from fossil fuel  use is the chief driver of global warming. Calculations by the climate watchdog Global Carbon Project put the amount of carbon released into atmosphere in 2014 at 40 billion tons. Climatologists, meanwhile, concur that warming should not exceed the 2°C  limit to prevent global warming to get out of hand to cause a climate change.

According to the authors of the new study, if the global warming can be kept below 2°C, the melting in Antarctica will cause a managable rise of a few meters in the sea levels. But every tenth of a degree above that limit wil serve to heighten the risk of irreversible loss of the Antarctic ice sheet with its east and west.

Yet, the available data do not leave much room for optimism:

For the global warming not to rise above the targeted 2°C limit, the carbon amount in the atmosphere should not exceed 3.2 trillion tons, two-thirds of which is reported to be already there. If the carbon emissions continue at the current rates, experts say only 30 years remain before the quota is exhausted.

“Our findings show that if we do not want to melt Antarctica, we can't keep taking fossil fuel carbon out of the ground and just dumping it into the atmosphere as CO2 like we've been doing," concludes Ken Caldeira of the Carnegie Institution who took part in the study.