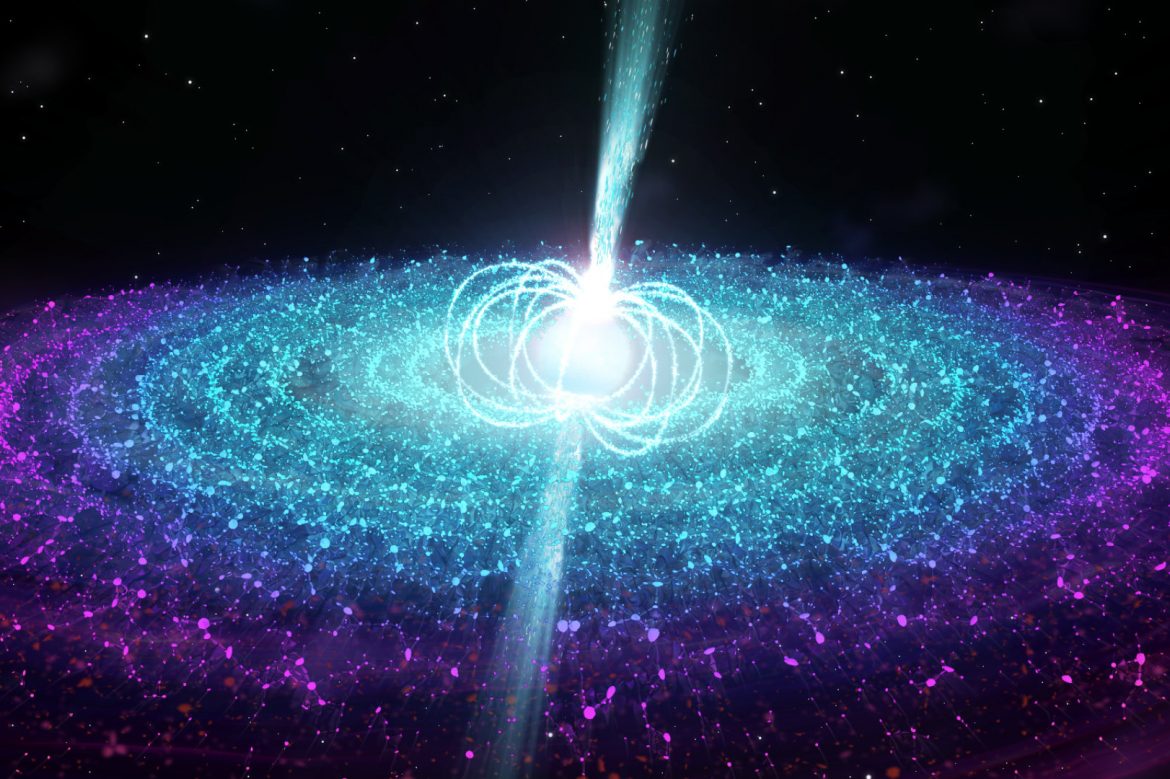 In the depths of space, lie curious dead stars that have reached the end of their lives. These celestial bodies, called the neutron stars, are among the most popular topics drawing the interest of any astronomy enthusiast.

A neutron star is what becomes a massive star when it explodes as a supernova at the end of its life and its core continues to collapse, becoming a super-dense stellar body with the help of gravity. Neutron stars are virtually tiny, almost as large as a city, with a mass not much more than that of our Sun. These small and incredibly dense cores of exploded stars are among the strangest objects in the universe.

How do they form?

Stars maintain a delicate balance for the majority of their lives. While a star’s internal pressure exerts an outward push, gravity tries to compress the star. The outward force comes from the pressure of energy released from nuclear fusion reactions at the star’s core. These bursts of fusion are why and how the stars shine. At the same time, the massive gravity of matter constantly tries to compress the star on itself.

When a star four to eight times more massive than the Sun explodes in a violent supernova, gravity suddenly becomes victorious in its billion-year battle with the star’s internal pressure. It compresses the star inward once the star’s nuclear fuel is depleted, and the outward pressure is no longer a part of the equation. A massive shock wave travels towards the core and rebounds, blowing the star apart. This whole process happens in only a few seconds. The outer layers of the star are often spectacularly blown into space, leaving behind a relatively tiny, dense core that continues to collapse. Gravity keeps compressing it, and at a certain point, protons and electrons combine to form neutrons – giving the “neutron star” its name.

Neutron stars pack their masses (which is 1.5 to 2 times that of the Sun) within a radius of 20 kilometres. They are so dense that a single teaspoonful of their material weighs a billion tons. If one sugar cube was of neutron star matter, it would be roughly as heavy as all humans on Earth.

The exact internal structure of a neutron star is a matter of debate. The current idea is that these stars have a thin iron crust of 1-2 kilometres. Below this crust, they are predominantly composed of neutrons.

A neutron star, once formed, does not produce any light or heat. Over millions of years, it will gradually cool down from its initial value of 600,000 degrees Kelvin, eventually reaching the end of its life as the cold remnant of a once majestic star.

As a result of its impressive density, a neutron star has an extremely strong magnetic field and gravity. On average, the gravity on a neutron star is a thousand billion times stronger than here on Earth. Therefore, its surface is extremely smooth, and the “mountains” thought to stretch across neutron stars are in fact, less than a cm tall.

The spin rate of neutron stars increases after their formation, as the stellar core compresses and shrinks. The same principle can be seen at work when an ice-skater keeps her arms close to her body to increase her spin. While a new-born neutron star can rotate at a fascinating rate of at least 60 times per second, things may get even more fascinating if the star is in a binary system, which may increase this rate up to more than 600 times per second.

Intense magnetic fields of a neutron star focus radio waves into two beams of light, firing from both magnetic poles into space. If these rays are oriented so that they can be seen from our earthly viewpoint, we see flashes of radio light at regular and extremely precise intervals, flashing just like a lighthouse. Neutron stars like these are called pulsars, and they are the celestial timekeepers of the cosmos, with an accuracy rivaling that of atomic clocks. While normal pulsars spin between 0.1 to 60 times per second, millisecond pulsars can achieve an incredible 700 spins per second.

After spinning for several million years, pulsars deplete most of their energy and transform into normal neutron stars. Although hundreds of millions of old neutron stars reside in our galaxy, the number of pulsars that had been identified only recently exceeded 2000, according to NASA.

Magnetars: Another notable feature of neutron stars is that they can have magnetic fields quadrillion times stronger than that of the Earth. If one of these ultra-magnetic neutron stars, called a magnetar, would approach Earth and become closer than the Moon’s orbit, its magnetic field could destroy data on all our credit cards.

This feature makes magnetars the objects with the strongest known magnetic fields. While scientists are yet to find out exactly which conditions cause a magnetar to form, rather than an ordinary neutron star or a pulsar, some theories suggest that the neutron star must initially spin 100 to 1,000 times per second in order to obtain such strong magnetic fields.

On December 27, 2004, scientists observed a giant gamma-ray flash from Magnetar SGR 1806-20, which is estimated to be about 50,000 light-years away from us. The flare released as much energy as the Sun has produced in 300,000 years in just 0.2 seconds, and fully overloaded the detectors of many spacecraft, creating identifiable irregularities in the Earth’s ionosphere.

Fortunately, there is no magnetar near Earth that is strong enough to cause any serious damage.

The source of heavy metals

Just like normal stars, two neutron stars can orbit each other. If they’re close enough, they may spin towards their final fate, eventually colliding in an intense phenomenon known as a “kilonova”.

The gravitational waves of one such event, observed in 2017, called GW170817, provided solid evidence that neutron star collisions were the source of the majority of gold, platinum, and other heavy elements in the universe.

What happened to the two objects after their powerful cosmic smash-up, which emitted an enormous amount of light and created gravitational waves rippling across the universe, still remains a mystery.

Witnessing such collisions is one of the best ways to study neutron stars, many of which are old and cold, and therefore difficult to detect. Researchers hope to observe more neutron star mergers soon, and the observational data from these events will reveal more about the internal structure of matter.