Skip to content
Homepage ARTICLES Our New Window to the Cosmos 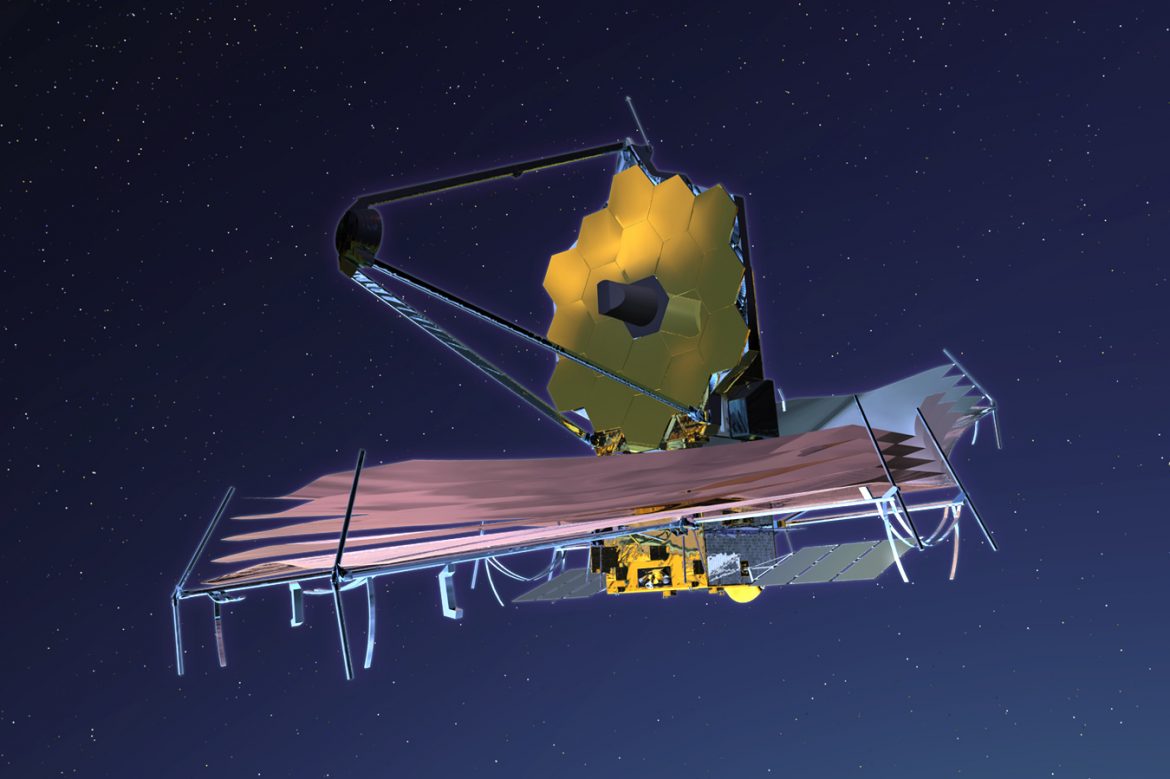 Our New Window to the Cosmos

The James Webb Space Telescope, the successor to the Hubble Space Telescope, will be launched on 18 December 2021 on an Ariane 5 rocket, from the European Space Agency’s launch site near Kourou, in French Guiana. Work on the James Webb, which is said to be the most powerful space telescope ever built, began in 1996. Its launch date was initially planned in 2007, but 14 years after that time, the completed telescope has finally arrived at the launch site and is almost ready for lift-off.

The Webb has the largest primary mirror that will ever have been sent into space.  This mirror is composed of 18 smaller gold-plated pieces in a hexagonal shape and is more than six times larger than that of the Hubble’s. It also has enhanced sensitivity and the ability to observe in infrared light. The Hubble, on the other hand, observes in the spectrum of light that the human eye can perceive.

To see the oldest stars and galaxies, we need to observe them in infrared light. The Webb will be the first telescope to see the farthest galaxies and provide an idea of ​​what the universe may have looked like about 250 to 100 million years after the Big Bang. It will be able to take images of the very early universe, and perhaps photographs of the first galaxies.

It will take about 30 days for the James Webb Space Telescope to travel 1.5 million kilometres until reaching its permanent home. The telescope will insert itself into orbit at the second Lagrange point (L2), which is the name given to a gravitationally stable position in space. L2 is a point close to the Earth, facing the Sun; this orbit will ensure that the telescope is aligned with the Earth while orbiting the Sun.

Sending a telescope with a 6.5-metre-wide mirror into space is not easy; especially since the Ariane 5 rocket, which the Webb will be mounted on, cannot carry anything wider than 5 metres.

For this reason, the telescope had to be designed in a way that allows it to be folded like a high-tech, billion-dollar, giant origami gadget in order to fit into the rocket. Additionally, since the telescope can only operate at temperatures close to absolute zero (-223°C), protecting it from sunlight and insulating against the Sun’s heat required a tennis court-sized sunshield consisting of five layers. Of course, this sunshield also had to be designed in a way that could be folded and then unfolded when in space.

Webb’s launch will be an epochal moment for NASA as well as its partners ESA (European Space Agency) and CSA (Canadian Space Agency), but this is just the beginning. The days following the launch will be exciting but challenging. Thousands of parts must work correctly in order to unfold the Webb and assemble it to give its final configuration; and this has to happen simultaneously with its navigation in space towards its destination.

The Webb’s first deployment will be extending its solar panels, which will take place between 31 to 33 minutes after lift-off. This will stop the draining effect on the observatory’s internal battery, by supplying about 2 kilowatts of power to drive the spacecraft’s electrical systems and avionics.

About 12.5 hours after launch, the telescope will fire its thrusters that will perform the first of several critical course corrections that will send it to its final destination in orbit. About two and a half days after the launch, the observatory will pass the Moon, faster than it took the Apollo astronauts.

Three days after lift-off, the frame carrying the sunshield will begin to unfold. On the fourth day, a deployable tower will extend to separate the telescope mirrors and instruments from the spacecraft’s main body. This separation will isolate the observatory effectively from the heat and the vibrations from the spacecraft body.

Unfolding of the sunshield membrane will begin approximately five days after launch, as the special covers protecting the sunshield during lift-off will roll out of the way.

Once fully unfolded, each of the five layers will be stretched and separated with the aid of special pulleys and motor systems. This is expected to finish on the eighth to the ninth day after lift-off if everything goes well. Then, a special radiator behind the main mirror will come into play, to help cool down the scientific instruments.

Deployment of the main telescope will begin with the unfolding of a tripod holding the secondary mirror, which will then latch into place. This is expected to complete within two hours on day 10. The primary mirror will begin to unfold on day 12, and it will take about three hours for the mirror’s side panels to extend and latch into place, each with three main mirror segments. After 13 days, the telescope is expected to emerge once the deployment of its most important parts are complete.

After the mirror blades are latched in their positions, a 10-day, multi-step process will begin in order to move all 18 primary mirror segments out of their launch configuration. The plan is to have this finished on day 25. Fine-tuning of the mirrors will take months, with the help of 126 extremely precise actuators on the backside of the mirrors.

On day 29, the Webb will fire its thrusters once again to propel itself into its projected orbit at the second Lagrange point (about 1.5 million kilometres from Earth), officially finalizing the most complex and challenging setup sequence ever attempted in space.

The James Webb mission, once deployed and operational, will be the premier observatory for space science for the next 10 years. Before these 10 years end, the Nancy Grace Roman Space Telescope (RST), named after “Hubble’s Mother,” will join her. This and other next-generation observatories will investigate the large-scale structure of the cosmos, aid in the search for extra-terrestrial life, and unlock some of the deepest mysteries about our universe!