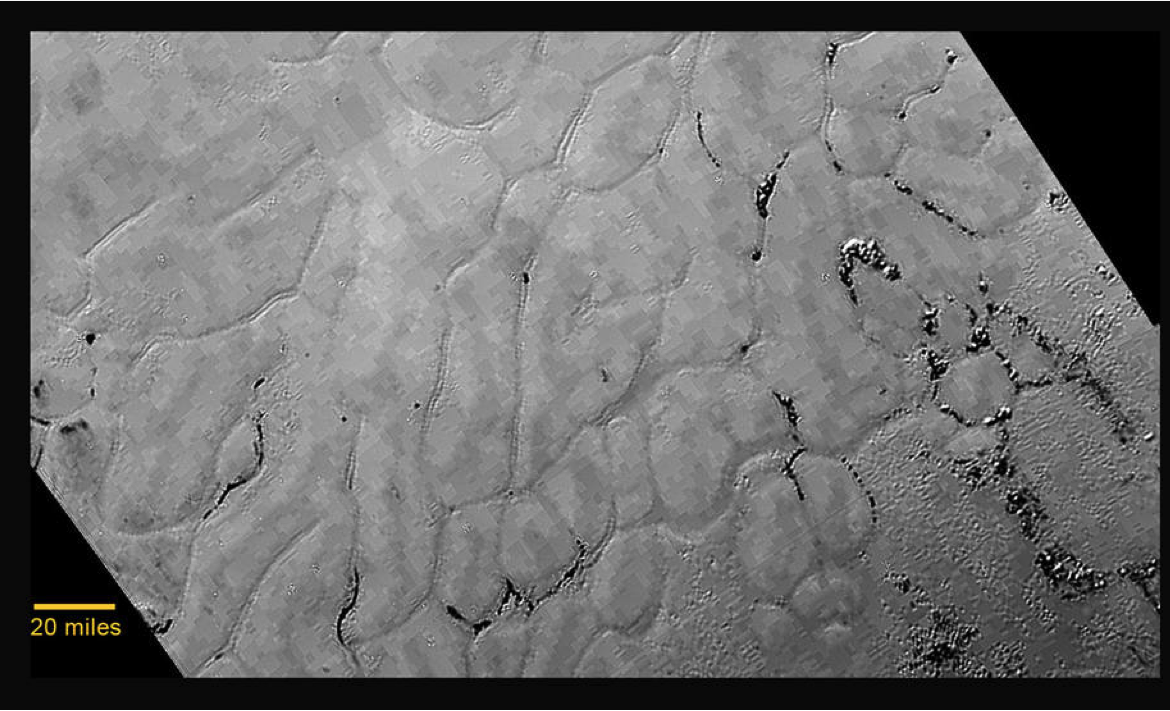 Signs of active geology on the dwarf planet…

NASA has unveiled  another of the striking images  its New Horizons spacecraft took during its  Pluto flyby  on July 14, showing in exquisite detail  a smooth icy plain at the center left of a light-colored, heart-shaped region  which has become symbol for the dwarf  planet in  the public mind.

A day earlier, NASA had released pictures showing mountains of ice, some as high  as 3500 meters, on the equatorial belt  at the base of the “heart” and the young face of  Charon, Pluto’s biggest moon,  traversed by  a 1000 kilometer system of fractures and scarps.

Spokesmen for the New Horizons team said like the mountains, the uncratered plain appeared to  be 100 million-year-old at most and that the geological activity which gave rise to these unexpected features could still be going on.

Passing  12,500 kilometers above Pluto’s surface after a 9.5-year, 5 billion-kilometer voyage, New Horizons headed deeper into the “Kuiper Belt”, the disk-shaped reservoir of comets and other  debris from the formation  of the Solar system 4.56 billion years ago, outside Neptune’s orbit.

The plain near the centerof the heart-shaped region, is formed of frozen carbon monoxide which becomes progressively denser towards the middle.

The team unofficially named the heart-shaped region “Tombaugh Regio” after Clyde Tombaugh who had discovered Pluto in 1930, and the icy plain as “Sputnik Planum” after the Earth’s first artificial satellite launched in 1957. The mountains, meanwhile, were named Norgay mountains after Sherpa guide  Tenzing Norgay who had first scaled Mt. Everest.

The image taken from a distance of 77,000 kilometers shows the plain is divided into cell-like portions  20-30 kilometers wide, ringed by shallow ditches, some of which is fillled with some dark substance. Unable to come  forth with a firm explanation, New Horizons scientists speculate that the cells could be a result of contraction of the plain after its formation like what happens to drying mud, or convection from Pluto’s relatively warmer interior rising through surface layers of  methane, nitrogen and carbon monoxide.  As for the mountains, they are thought to be formed of water ice which would be no less harder than rock at Pluto’s surface temperatures  of  – 223 to  –233°C.

The team experts  say the collection  of pits seen at the lower right of  the plain’s image could have formed when volatile ices “sublimated”  directly into gas without an intermediate stage of  liquid form in the absence of adequate atmospheric pressure.  Dark  lines aligned in the same direction could be the work of  winds sweeping the surface.

Another important discovery is the extent of  Pluto’s atmosphere, which was detected at 1000 kilometers above the surface,  some of which forms a cold and dense tail behind  Pluto, formed of ions pushed  off  by the solar wind.